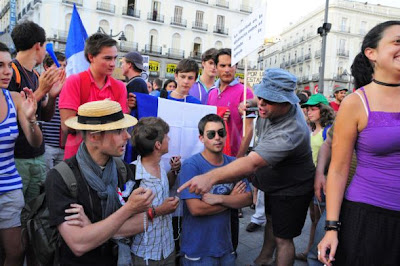 A French priest and Faithful harangued by a anti WYD protestor
I am sure this will be happening in Madrid as it did in London.
Richard Dawkins brought at least one laspsed Catholic back to the Church during the Papal visit to the UK. She saw the the anti-Pope snarling mob led by Dawkins and Tatchel, with their plastic devil horns and inflated condoms, sex "toys" and angry faces and she saw the sheer joy of those cheering the Pope and the banners carried by the enthusiastic youth. She said it wasn't about arguments, it was about faces. Dawkins & co. glaring and hopeless, those who were there cheering the Pope full of hope and smiling - anger and joy, hate and love.

For her it was the contrast between two worlds, signified by the Pope and Dawkins, faith and faithlessness, hope and hopelessness, the spiritual and the material, light and darkness.

The same two worlds meet in Madrid, they will meet in Dublin next year in the Eucharistic Congress. There is no room for dialogue, there is no common language, there is only contrast. Ultimately this is an apocalyptic battle between Life and Death.

There are two worlds, two cultures that are irreconcilable. I think that it is very interesting that in Madrid as in London those who are anti manifest their opposition do so under the guise of being against the cost but actually so much of the opposition seems to revolve around sex and sexuality.
at August 19, 2011

There's an interesting report today about the Equality and Human Rights Commission.

Apparently, they are to back Nadia Eweida at the European Court of Human Rights, as they are in favour of Christians displaying religious symbols at work without discrimination.

But when it comes to conscientious refusal to conduct civil unions and uphold 'gay rights' then the EHRC is against this.

So, as Stephen Perks of the Kuyper Foundation wrote a few years ago in his journal "Christianity and Society" you can worship Jesus and declare your faith in Jesus as part of a cult of Jesus, as long as you keep it as a personal worship hobby.

Like the Roman Empire of old, we are not to assert that Christianity is a 'religion' in the accurate sense of the word, that is to say a principle which must structure the whole of life as the standard of judgment for all things while being itself subject to no judgment by anything prior.

Are human beings a body or a soul? Both. Is the world made of matter or ideas? Both. Is God here with us or far away? Both. Was Jesus God or Man? Both. Should we follow the dictates of faith or reason? Both. How does one get to heaven, by faith or works? Both. Understanding, of course, that these pairs of seeming opposites must be placed in their proper relationship to one another.

This is, I think, part of what Christ means when he says that he has "become all things to all men," (1 Cor. 9:22), that everything that exists, everything that is good has a rightful place in the Kingdom of God. There is, then, no argument about who is right, only a discussion about how it is that we both are at the same time.

Stop by my blog.

Carry on writing stuff like this and you'll have Michael Voris accusing you of being too black and white.

The "Ugly" lot do have something in common,they lack Self Esteem and hate to see happy,contented people.They pull out all the stops to disrupt but they get ignored by everybody except by corrupted organisations like the BBC and the Garbage Press

Mercator reports that Andrew Brown in the Guardian has taken issue with the BBC because it reported the 'thousands' of demonstrators against the Holy Father but somehow 'forgot' to mention that 1.5 Million Catholic youth had gathered in Madrid.

I don't have to go to London or Madrid to witness Satan's army versus the Faithful in Christ.

I simply need to walk around anywhere in the United States.

The founding fathers of America consecrated the nation to Lucifer.

Here is how children are reacting to being born to into a luciferian society:

If you listen to the parents, they confess to being Godless; "we are Buddhist."

Saint Michael come to our defense!

"The "Ugly" lot do have something in common,they lack Self Esteem and hate to see happy,contented people.They pull out all the stops to disrupt but they get ignored by everybody except by corrupted organisations like the BBC and the Garbage Press"

The Trinity doesn't ignore them. The Father, through the overshadowing of the Holy Spirt sent the Son to save these unacknowledged by many, sinners. The Father paid the greatest sacrifice EVER for us (who still consider ourselves sinners), as He turned His face away from His only begotten Son in order to save these men's souls. As we ignore them or poopoo their eternity's away, as if their judgment has already come through the black and white pronouncements of messengers like Michael Voris(not endorsed by Rome yet), remember how much their souls are deemed worth in the court of God (fully endorsed by Rome).

Who, in the laity, would ever be able to judge another?
Pray for the grace to love these men, the same love the Father expresses, in the incarnation and crucifixion, the same love the Queen of Heaven embraces when she says 'Yes' to God's request for her to bear The Saviour and also to spiritually help form each one of us, can we dare receive it, in it's evelasting 'NOW-ness'?

He also sends His priests and fellow believers to proclaim Good News to them. They are deemed able to judge, as we hear Christ Himself when they loose or bind their souls.

What a terrifying truth, until our perfecting in love arrives, to fall into his hands. I can hardly bear to look to closely sometimes, it is so immense.

Rosaries, for love of souls. Rosaries, for purity, for obedience to the Church according to God's law, for joy, amidst circumstances.

And best of all, for sobriety! Peace of mind. You have to want this for others, especially sinners.

Power to the powerless!