The Divisiveness of the Assumption 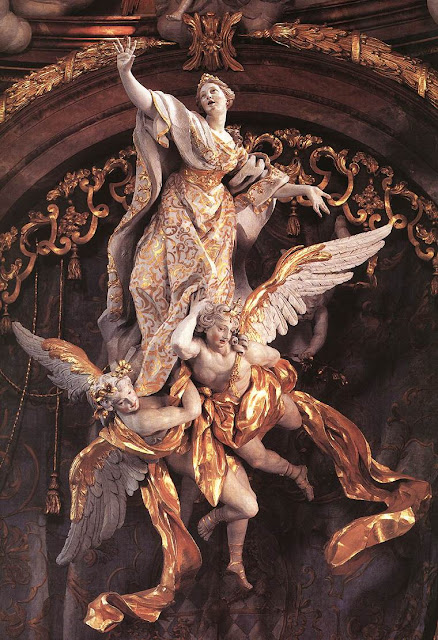 In Guildford, Canon Paddy Cox began his sermon on the Feast of the Assumption 25 years after the infallible declaration of the Blessed Virgin's Assumption into Heaven with, "Now we believe what we have always believed ..." It wasn't a very good sermon and that is all I can remember from it, it is however one of the few sermons I remember. The Canon was "a building priest, not a preaching priest".

The declaration of Mary's Assumption brought about no change in the belief of Catholics, therefore one could ask what was the point of the declaration, it certainly wasn't being seriously attacked by anyone. One could be cynical and suggest that it was merely Pius XII being triumphalistic, that may or may not be the case. If it was that, then it seems to have wondrously providential, it was the declaration of the Assumption that formed the background of the rest of the 20th century. So many of the names of the bishops whose names are inscribed on the bronze plaques in the portico of St Peter's as being present at the declaration are on similar plaques which note their presence at the Vatican Council.

With the torrent of the Rhine flowing into the Tiber a decade and a half later the Assumption highlighted so many doctrines that are particularly Catholic, it emphasised distinctiveness and divisiveness.
This isn't an exhaustive list but it shows Our Lady as the touchstone, or Sceptre of Orthodoxy. In places like England and Wales where Marian devotion has been allowed to become almost an optional extra for many Catholics, the 1950 declaration becomes a useful burr reminding us of the distinctive nature of Catholicism. Indeed we, "believe what we have always believed" but without the 1950 declaration it could easily be that in 2011, we believed something else.
Thank God for Pius XII's willingness to mark the distinctiveness, divisiveness, of the Assumption.
at August 15, 2011

I went to the 11am service yesterday at a Catholic church, sneakily driving past my own at 10.30.
Objective: to attend an Assumption service and hear a sermon.

The priest spoke of the clarification made at the Second Vatican Council.
Mary had become too distant and ethereal, the importance of her humanity was stressed, her
bodily assumption indicating this and our own physical resurrection.
A lady in a white robe took over the reading of the Scripture because the one at the lecturn moved away with a cough.
I commented to my neighbour in the pew and was told that was the priest's wife (I'd forgotten about that arrangement in the Catholic Church).
Later I watched as the people went up for Communion. No kneeling, as in my church. Only some made the sign of the Cross, few moved to the chalice.

I lit my candle before the statue of the Virgin Mary out of respect for her, thanked the welcoming people and left. Genuflection seemed optional.

On the way home I thought: Now I see what Father Ray Blake writes about.
Sincere, but a bit of a hotch-potch.

Thank you for this interesting post. I remember being particularly moved by Pope Benedict's reflection, on the Mary's yes being the pivotal moment of Salvation History, at WYD in Sydney before the Angelus.

One question that has arisen in my mind since then is whether it was possible that there was another Immaculate Conception but the lady did not comply with God's will for her? That possibility seems to increase the significance of Mary's "yes" and her free will, but would it be contrary to Church teaching to entertain such a possibility?

Why was it proclaimed? As Pope Benedict says so often when we, as people, or, as Church have been revealed the truth we must proclaim it. That is a moral imperative. Forget about niceness, political correctness or peer pressure. Proclaim what God says is true.

It was a shame in our Church, the priest had selected Marian Vestments and a variety of Marian hymns but in his homily, rather than speaking on the importance of Mary in salvation history, chose to talk about the new translation of the Mass! A real shame.

Why do Orthodox refer to it as the Dormition? Is there a difference?

Physiocrat,
We tend to use "the Assumption", in the West
1]
because of the antiphon "Assumpsit Maria..."
&
2] because the Dogma carefully avoided talking either "falling asleep" or "death" of the Virgin.
Dormition is however a Western term to describe the feast as much as Easstern.

I prefer Dormition because of the iconography, Christ coming to take the Virgin. Assumption seems to suggest self propultion.

The icon I have posted today of the Dormition or Valesquez' Assumption, both have their theology, both rooted in Tradition. The woman taken up is perhaps more ancient - the Apocalypse.

I felt a bit cheated this year as the celebrant where I attended Mass did not give a homily at all for the feast day so pleased to read Father Ray's post. I was particularly disappointed as the celebrant was the new Bishop of Brussels and I was interested to hear him speak.

Plenty of flag waving from the hndreds of WYD attendees on their way to Madrid and it was good to see so many enthusiastic happy young people, many draped in their national flags from every continent.