I can't help feeling that the Holy Father's Address to the Bishops of Brazil, at Vespers in Sao Paulo, is something that is really addressed to all the world's Bishops.

Below I have put several quotes on particular aspects of his address. 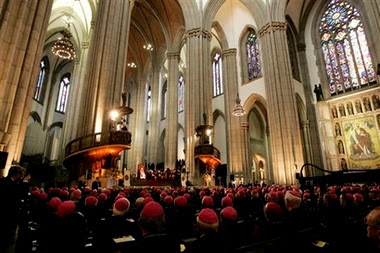 Not even the setting (the beautiful and vast Metropolitan Cathedral of São Paulo), the music (some tasteful polyphonic pieces and an aesthetically deficient, yet dignified, use of plainchant for the psalms and hymns of Vespers -- unfortunately, in the vernacular), nor the overall attentive mood of those who were present at the event could possibly have prepared the largest episcopate in the world for the remarkable speech of the Holy Father to the Bishops of Brazil.The Holy Father delivered a precise diagnosis of the deep crisis of the Catholic Church in Brazil - extensive to many other nations: all important topics were covered by the Pope, from liturgical disobedience to attentiveness to the sexual maturity of seminarians, from a condemnation of the use of the Church as a field for ideological confrontation to the need to be clear in all ecumenical settings that the only Church of Christ subsists in the Catholic Church presided by the Successor of Peter.In our modest opinion, this remarkable speech (in English - called a "homily" in the Official Program, due to its liturgical setting, but not particularly homiletic) is one of the most important of the Pontificate, along with the Christmas Address of 2005 and the Regensburg Address of 2006. The true question is, however: will the bishops of the world understand and take heed of this Papal reprimand? I think that it is significant that the Pope stresses that the main reason for the Brazil trip, is to be present at the opening of CELAM, the bishops of Latin America and the Carribaen's ten yearly meeting. It seems, almost, that he is trying to catechise the Bishops. A friend of mine, said that his Wednesday Audience addresses were mainly aimed at the Roman Curia and clergy living in the city and it seems to me that he is trying to get the Bishops to take their rightful place in the government of the Church but that he can only do this if they understand their role as "present day Apostles" and take that role seriously.
at May 12, 2007

Brilliant stuff -- Viva Papa -- Will OUR Bishops take this up.

I hope someone will publish this soon!

The Pope´s visit to Brasil has been fantastic!
Trully, the Holy Spirit is inpiring him.

"he can only do this if they understand their role as "present day Apostles" and take that role seriously."

Without intending to be at all cynical, it is going to be very difficult, if not impossible for the present generation of bishops, the product of a very poorly formed, downright seditious generation, to take seriously an authority that they misunderstand, and misapply widely and constantly; deliberately; obstinately. A few will, but most will, in their pride - I believe - continue to blindly follow their own dim lights, and what they take to be calls, but which are in reality merely the promptings of the spirit of the world. Orthopraxis is the answer, papal action; their ears are deaf to his appeal. IMHO.

Hebdomadary,
The Bisghops above all need catechesis, and we need hope. I think that the Holy Fathers visit to the drugs rehabilitation community was an important lesson in orthopraxis.
Bishops, are like most of us, they learn from what works, what brings true liberation and true happiness.
From little I know of Latin American bishops, I think may will say: we played pipes they wouldn't dance, we sang dirges they wouldn't mourn, so let's give Jesus Christ a go!