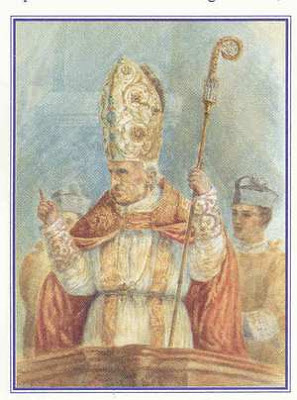 Just a snip, Sandy, one of my parishioners who is doing a thesis on Catholic Education in Brighton in the 19th Century, told me that Cardinal Manning preached here and stirred the Protestant Defense Association to call our Church, "Satan's Synagogue".
St John the Baptist the first Church in Brighton opened in 1835 was made to look like Palladian fronted Assembly Room, by the 1860's, the heirarchy having been re-established in 1850, the parish priest decided we have the highest spire in the town and built something quite obviously a Church. Manning apparently preached on the Truths of Catholicism, the sermon was reported in the press, provoking this outburst in a pamphlet.
The PDA was particularly strong in Brighton, a generally reacted against the excessive ritualism of the C of E in the town, where south coast religion was significantly "up the candle".
I am tempted to use "Satan's Synagogue" on our letter head.
at May 16, 2007

"Up the candle" - wonderful phrase! I have stored it up for future use! Amette

Father, remmeber there are parts of the United Kingdom where this nonsense still goes on.

In Glasgow we are but a month away from the "marching season". On the first saturday in July my wife disuades me from attending morning Mass lest I invite the attentions of the Orange mob. As an A&E consultant her workload rises sharply that weekend. It is inadvisable to wear anything that hints popery (holy medals, crucifixes, Celtic shirts, anything green....)