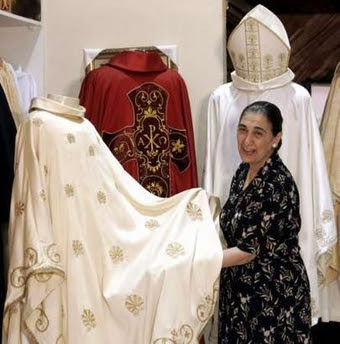 Maria Laura Correia's arranges the vestments she created for Pope Benedict XVI, in Sao Paulo. The Pope will attend a mass in Aparecida in Brazil on May 13.
The pope is off to Brazil tomorrow to address the Bishops of CELAM - the Bishops of Latin America. I am sure that what he has to say will be of significance fro the whole Church, moer than half the world's Catholics live in South America. The Church in Latin America has many problems, the onslaught of Protestant sects, the influence of the Charismatic movement, the poverty of catechesis, the continued influence of a Marxist reading of the Gospel, the influence of "traditional" religions" and much else, a great deal fo this can be traced to shortage of vocations and to the lack of their proper formation.
The Pope in the past sought to temper the excesses of Liberation Theology has said that some of these problems come from a need for a deeper understanding of the Divinity of Christ and its expression in the Sacred Liturgy.
Fr Jimmy Tucker has an thoughtful piece here that has implications for the rest of the Church.
... if you're living in Recife and take your kid to get baptized as an infant and maybe First Communion at age 7, that child is counted as a Roman Catholic. Even if he never goes into a church except for those two times. Even if he doesn't know any prayers, has no idea who Jesus, Mary, and the saints are, and isn't clear exactly what the Ten Commandments say. Even if he's never read a page of the Bible. Then, 20 years later, if he meets some lay minister of this or that sect and perhaps has some emotional or spiritual need met, and maybe learns something about God, and a few months later gets rebaptized into the new religion, then he counts as a defection from the Church.
The problems are many. One is the chasm between real belief and practice of a religion, on the one hand, and getting a Sacrament or sitting through some mandatory classes, on the other, (as we mentioned in this post). Mix in a great deal of ignorance of the basics of the Gospel and Catholic doctrine, and over the centuries you get many places that may be 100% Catholic on paper, but are woefully uncatechized.
Another problem is that many of the sects promise faith healings, prodigious wonders, blessings to get rich by, and other sorts of amazing things that naturally appeal to the poor and ignorant. The Washington Post recently had a piece on one of the more disreputable of these outfits, which has opened a "mission" in Washington, DC. If that's the sort of thing that floats your boat, or if you're just desperate, then old-fashioned Catholicism probably seems pretty dull by comparison. Granted, there is now a large Catholic charismatic movement in many of those regions, appealing to many of those same desires for enthusiastic wonders, but I personally have many misgivings about that sort of thing, even in an authentically Catholic context.

A third thing that contributes to the hemorrhages is the proportion of laymen to minister. In my own parish of 10,000+ parishioners, it's physically impossible for the three priests here to have a meaningful, personal relationship with the vast majority of parishioners. One knows a couple hundred of the people by name, is involved on a more personal basis with a few dozen, and the rest are anonymous faces. Most of the sects' congregations are much smaller (except for the mega-churches), the pastors are in readier supply due to fewer requirements and a much shorter formation period (if any at all), and so the congregant-to-minister ratio is much more manageable, allowing for a lot of personal interaction. If you go from a place where a nameless Padre is glimpsed for 50 minutes from the crowded pews once a week (if you go that often), to a little storefront place where the pastor and his assistant ministers know your name, your kids, your job, your address, and get involved in your life -- well, quite apart from questions of doctrine, the human appeal is obvious. For a long time, I've thought that we should come up with a way to get sound, trustworthy lay leaders in our parishes, set up as sort of grass-roots "ministers" for groups of families who want a more personal connection to the Church.
at May 08, 2007

Hi Friar,greetings from Brasil.
In general I agree with Friar Jim comments.
What do you think, how is the Catholic Charismatic movement seen in Europe?

Hello Luiz,
I really don't know how the Charismatic movement is viewed in Europe. It is certainly less prominent than in the Americas or Asia.
Personally, I think it is a replacement for a liturgy that fails to transcend the human heart and a consequence of a loss of devotion. Someone once said, "When Latin went out tongues came in".

Dear Friar Ray,
thanks for your response.
These days I feel I am a "confused" Catholic.
Let me explain you why.
I am 51 years old, born in Brasil.
I remember from the time I was a boy, that the mass was in Latin, etc....I had my first communion with Latin mass.
Then came the Vatican II, and I understood that the changes were for "good", the right thing, simply because, in my age, I could not have any judgement of what was being done, and probably believed that if the priests ,bishops, the Pope, were changing the mass, we should follow the "sheperds".
Then I raised 2 boys, and my older boy at the age of 21 decided to quit Medicine school and join a Traditional Catholic Seminaire in France ( Institut du Bon Pasteur).
Then I started to study Traditional Catholicism and Modern Catholicism ( forgive me for the duality, since I believe there is only one Catholicism)and there came the "confusion" , since to my humble understanding capacity, there are virtues in Tradition and also in the reformed liturgy.By the way,it was in this browsing process that I came to find your blog.
I do agree that we are seeing unforgivable and practices with modern priests that should stop and be subject to disciplinary measures.
On the other hand, the use of native language seems to me a positive practice, otherwise people would not understand what was happening in the liturgy.
One week ago, I had the privilege to attend two Tridentine masses in Brasil, by on the very few local FSSPX parish, and while I was very much impressed by the beauty of the liturgy, I felt disconnected from what was going on , specially during the most import part of mass( consecration?), may be due to my lack of "traditional evangelization".Anyhow, I am above the average Brazilian in education , and I think the "standard" education Brazilian citizen would understand nothing at all.
I am anxiously expecting for the motu proprio, because, I believe there is a significant number of Catholics that would happily go back to Tridentine mass. I feel that , when I go to Novus Ordo mass and I see half the church acting in a "charismactic" way, and the other half behaving very conservatively. Clearly, for me in Brasil we have a "bimodal" Catholic population. How to gather both Catholic populations togehter?
Also,over the years I have seenmany ( thousands?) of people ( in Brasil) that were heavy sinners of all sort, and that were recovered by the Charismatic movement. I respectfully think the Traditional liturgy would not be so succefull. Perhaps I am wrong. I wish I am wrong. As a said I am confused some times.
Let's pray for a succesfull visit of the Pope to Brasil.