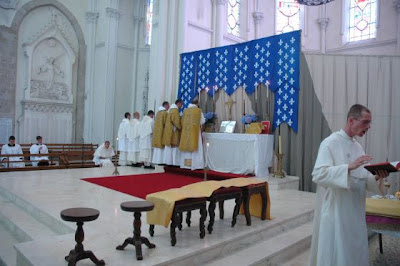 I was very struck by this picture on NLM, unfortunately there is no link, so I do not where it comes from, anyone know ? It is obviously the Dominican Rite somewhere, presumably, from the fleur de lis, in France.

What I thought was interesting was that this is a modern sanctuary in what looks like an ancient setting. Americans have the term "wreckovation" for modernising, but this really does not seem to be that, on the contrary, the lack of fussiness gives the impression of something that is remarkably elegant, an expression of "noble simplicity".

Does anyone know of an architect in the southeast of England who could help us re-order our Church? Really it is a restoration job, putting right what was mucked up in the 70s, moving fonts and the altar. We started thinking about it a few years ago, I lost patience with our diocesan art and architecture committee who wanted us to put in ramps and hand rails, to replace steps; ramps would have to have a length of 12ft for a rise of one foot, absolutely mad! I have also been putting off doing something, in the expectation of the promised documents from Rome on the liturgy. Presumably the M.P., which is "imminent" will affect the interior of our churches, so both "usages" of the Roman Rite can be celebrated.

We need an architect who will be sensitive to the Victorian interior and yet have some imagination with the interior decoration, lighting, flooring and so forth. If you know of someone who has a proven track record of good quality work, and who can work on the pittance we can afford, let me know.

In England we really don't seem to have architects who actually understand the liturgy.

Similarly, if there is anyone with vast quantities of money, we would be very grateful for that as well.

No priest can do anything to his church without the permission of the relevant historic church's committees. Surely ramps and so on are now mandatory under Government legislature to enable disabled access? The committees are there to see that they are done as well as possible without harming the churches. Unauthorized work can incur severe penalties. The committees were set up to protect the Catholic Church's exemption from planning legislation and to protect churches from future clerical despoliation like that following Vatican II. So far the system seems to be working well. Parish priests would have a harder time under state control.

The people who did Portsmouth Catholic Cathedral did a pretty good job. Why don't you call them?

anti wreckovator,
1 After expense and trouble, hence giving up in irritation, we discovered that ramps and handrails are not mandatory in an historic, or any other situation, where they would be out of context.
2 As for the Historic Churches Committee, we were given permission to paint an already badly painted altarpiece as an experiment, only to discover the person who gave permission, vetrbally, denied having done so. Not something to encourage confidence.
3 Under state control we might expect people to know what they are talking about.
4 People I know who have historic houses or other buildings seem to get a little more help and advice from at least some local authorities than we do have from the Historic Churches Committee.

I couldn't quite imagine Westminster Cathedral/Brompton Oratory even Westminster Abbey with ramps and handrails on the sanctuary.
What an absurd idea!

Ramps have nothing to do with sanctuaries but are, I think, confined to external access. Westminster Cathedral is about to have ramps built at the west front and the Oratory has temporary ramps at the side. At Westminster Holy Communion is distributed in the nave, most Catholic churches do the same, and at the Oratory people kneel at the altar rail, unless they are in wheelchairs when Holy Communion is brought to them. I don't know your church but, from the photograph, it looks as if Holy Communion could be distributed quite easily. How do people get in? Sorry about your experience with the Historic Churches Committee. The majority are co-operative and have members of real knowledge and experience. Was it the secretary or chairman who misinformed you? If so, they should be reported. Repainting is a delicate business and should be done professionally. What was the altarpiece like originally?

Anonymous,
Our application was about the sanctuary, as for the rest replying to "anonymous" and discussing this in detail, here, is most probably not appropriate.

Fr Dwight,
We can't afford the architects of Portsmouth Cathedral.

Architect's fees are a small proportion of the total cost of a job and if the architect is any good, he will save his fees in work avoided or done more efficiently.

But surely this is just a simple reinstatement? In which case a surveyor would be better, working from old photographs. Which is a good reason to leave out the idea of the priest celebrating Mass with his back to the Lord - it would always be possible to use a table on the sanctuary steps if anyone really wanted to do that.

If the altar was where it ought to be then the candlestick would not have got knocked onto the floor and bent, which one could take as a message from on high.

Is there a Catholic studying architecture who needs to write a dissertaion or a thesis, and who could do with a few bob off his student loan? You might encourage a young Pugin! It would be a gamble but if the plans were no good, you could simply not go through with them.

You could ask the FSSP if they know of anybody.

You could write to Gavin Stamp who at least would approve of the idea.

You could advertise in the Catholic Herald.

You could ask some of your new Polish parishioners if they know of a Polish architect who needs a job to establish himself in the UK. Do a deal where he gets digs in the Presbytery.

"The Muniment Room: where Ideas are Free!"

Do they have an architecture depatment in one of our local universities? maybe someone could take it on as a project.Or the National Lottery Heritage Fund might have a few bob left after the Olympics.

The sanctuary you show was clearly a temporary job, Father. Look at the the narrow predella with the sacred ministers barely teetering on it; the curtains have been hung behind a west-facing altar. The church itself looks nineteenth/early twentieth century to me.
I see the celebrant has an apparelled alb, but the other ministers haven't. And the particular line-up of ministers and servers is strange; I can't imagine what part of the Mass this is.
Might it be Premonstratensian rite? The white habits of the clergy suggest it. Are they the Canons Regular in Gap? Come to think of it, I think their habit is white.

Ttony,
Most have been investigated

henry,
You are right but who?

Nick,
I don't want some kid, without any sense of what a sanctuary is, touching it.

Fr Justin,
I think it is Dominican as I said. If you look, the sanctuary ends just beyond the altar. Is it a predella or a carpet? It is most probably temporary but still it is elegant.

Email Shawn at the New Liturgical Movement, and ask if he wouldn't mind doing a little link piece. Lots of architects and students read the NLM (I think a main contributor is one, too). Bet you get some interesting bites.

There is one early Victorian Catholic Church on the south coast, which had stencilled pillars and ceiling, in a Georgian style and panels of stencilled paper on the walls of the nave and lining and rich colours on the walls, all this has been restored under the auspices of the HCC, but in a dreadful, pale pastiche of the original and even of what was there recently.
The floor which was covered in linoleum tiles has been stripped but then varnished in something that looks that heavy duty marine varnish, giving the impression of IKEA.
I can't help thinking that the HCC deals in the bland, the neutral and the least offensive, in short design by committee, to the lowest common denominator.

What ever you decide, if it's good it's going to be expensive.

you might wish to contact Leeds Cathedral as they have ungergone a massive reordering BACK (in some respects) to the original Edwardian design. It won't be cheap of course. This is after decades of wreckovation by the way.

The only problem is Arthur's absurd Cathedra which has replaced the high altar. This particular absurdity has given something to do for one of his successors in about 40 years time. In other words get rid of the monstrosity.

I do believe that on Fr Finnigan's website there was a video posted from a French Church. In the video a modernist sanctuary is transformed in under 20 minutes into a traditional (and of course more tasteful) sanctuary. Delightful little film.

One of the reasons this works is that the altar alone is the focus. The post 1970 sanctuary arrangement always have two or three focii, the altar, the ambo and generally the chair, and often the tabernacle and if you add an off centre crucifix you end end up with visual confusion, or at least something visually unsatisfactory.

Also the post 1970 arrangement seems to evoke a certain aggression, in sofar as all these elements are direct "at" the people, rather than co-operating with the people to draw them to God.

I agree completely. The sanctuary at Leeds for example, resembles a theatre stage complete with props none of which complement one and other. It is a visual failure.

This obsession with symbolism (often culled sporadically and crudely from the early Church) is no substitute for coherence in form. Something that modernists refuse to understand.

It's interesting to examine the cinema of the great John Ford. Freeze any scene from one of his movies and you can identify astonishing formality of camera angle, lighting and his use of repetition and emphasis. This despite the naturalism of the action and the performers.

Most great art is a complimentary synthesis of form and content. Modern reordering seems to have absolved itself of all responsibility in this regard.

I seem to have lost several comments again, my applogies.

Finding a surveyor - look around, ask around and see work that has been done, also if you come across anywhere which has had a good restoration. Probably you are more likely to find this in an Anglican establishment.