Oh dear tagged twice, or maybe even more often, but I have seen my name on Mac’s and now Joee’s blogs: what are my five favourite Catholic places in England.
I am tempted to be smart and just do pictures of my sitting room, kitchen, church, Brighton beach, and my confessional or a friend’s or parishioner’s house, or just a list of former parishes.
I remember as a precocious six year old being asked what my favourite colour was by Mrs Baldock, when I asked “For what, for shoes or dogs or wallpaper?” I was made to stand with nose pressed against a blackboard. I developed a deep hatred of Mrs Baldock in that half hour, for which I still think I need counselling, endless counselling.
Not having a car means I tend not to go to the odder places in the country. I have affection for people not really for places, but let’s try to be honest. 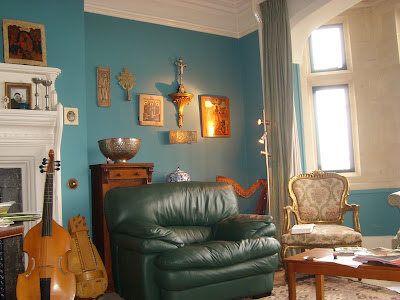 I really do love my sitting room, it has pictures and mementoes of people who are precious to me in it, as well as instruments and music, books and icons. It is the place I pray in. I have this thing about the ancient monastic Fathers who warn about wandering about, it is the place where I centre myself. 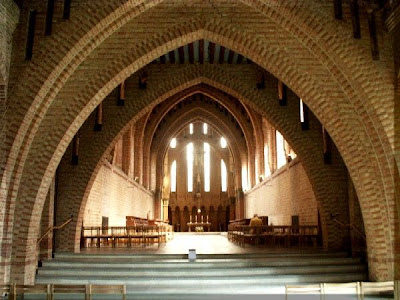 Quarr is another place I love, my previous Bishop, now Cardinal Murphy O’Connor let me go and try my vocation there, Abbot Cuthbert and the community showed me great kindness. Whenever I go there I want to stay and at the same time, …well I haven’t been there since I left. It was also the place where the Cardinal showed me the greatest kindness I think anyone has ever shown me. He just came on retreat there and spent time with me, saying little, a simple thing but an extra-ordinary act of generosity and graciousness, so characteristic of him. A lesson in how a Bishop is a also a Father. 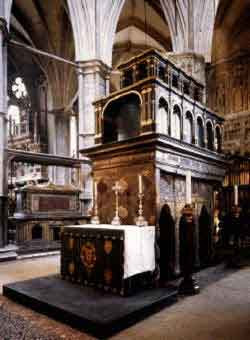 The tomb of Edward the Confessor, which I consider is still Catholic, as it is occupied by a Catholic, in Westminster Abbey I love, it sums up English Catholicism for me, I have always wanted to say Mass there. 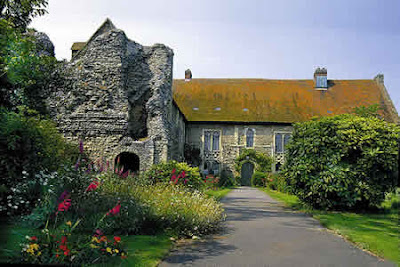 again I haven’t been there for aeons, they have tiny little chapel which I think is 11/12 cent, originally a gatehouse, I used to take our confirmation group there, there are eminently sensible nuns there.


St Joseph’s Church, Guildford (now demolished and replaced) it was where I first encountered the faith and Catholics, and where I learnt to pray from a master of prayer called Fred. He was the sacristan and just used to sit in the Church before the Blessed Sacrament, for hours.

I tag Orthfully Catholic, Fr Justin, Ttony and Fr Dwight Longenecker, who used to live in Bexhill-on-Sea, if they haven't already been done -but not Mrs Baldock - but you don't really have to do this and I am not going to put this on your blog, so you can ignore it if you like!
at May 18, 2007

Such a beautiful piece about your living room and Quarr. It really made me think. You really do write brilliantly. Nice mug shot. Looks a bit like you.

i like your room the best! It looks calm & serene! Just what i could do with...one can always dream..

Father, I started this meme...do I have to find another five?

Minster is a great convent. Sensible is the word for those nuns - the last time I saw Mother Nikola, she was driving a tractor!

When I accused you of cheating, I was thinking more of Minster Abbey... I thought you meant Minster in Sheppey, not Minster in Thanet...
ooops, my mistake!

Fr Dwight, I was in St Leonards and reconciled a couple of your parishioners to the Church.
I did read, on Joee Bloggs(?), you were received at Quarr. Who by?

Aha! In my travels for St Barnabas Society I once went to Cardiff and stayed with the Rosminians. Bexhill came into the conversation because one of the priest once served at St Mary Magdalene, Bexhill. He said when he was there he remembered an American with a funny name who was curate at St Peters....

St Leonard's always reminds me of a joke in one of the Hercule Poirot novels. An English aristocrat insists on referring to Poirot's sidekick Hastings as 'St Leonards'.

We were received into the Church by Fr Joe McNerny, who is now a pp in Portsmouth Diocese.

OK Father. Done. What an unimaginative person I am!