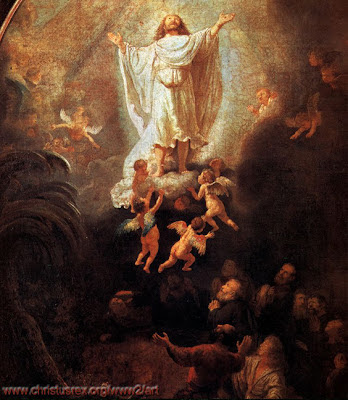 The Mother of all Novena’s and the scriptural basis for this type of devotion begins tomorrow.
The nine days that precede Pentecost, when the pious spiritually join themselves with the Great Mother of God and Apostles in ardent prayer, and meditation on the Life of the Lord, before the Coming of the Holy Spirit begin tomorrow, in Rome it will celebrated as the Ascension of Our Lord Jesus Christ, in Jerusalem it will be celebrated as that, even the Church of England will celebrate it as that, when I was a little Protestant boy, at a Protestant school, we actually had the day off after going to Church, only time in the Year it happened. What is more The BBC, which some regard Catholics seem to regard as anti-Christ, will actually have a service on mainstream radio, not sidelined to Radio 3, Thought for the Day will be on it! I even know of Baptist Churches that will keep it as a Holy Day, because it has a Scriptural dating; Nine days before Pentecost.
We Catholics, however, subject to the rule of the Episcopal Conference of England Wales, for the first time, since Augustine brought the flame of faith to these benighted shores, will not celebrate this great feast on this day. Whilst Mass is celebrated as feria the voices of our school children will be heard, not in the Church but in the school playground outside the Church, will they be there on Sunday? No, the majority will not be. The Polish community, I think are using the Church tomorrow night, and I know that one or two priests who celebrate the Traditional Rite, will be celebrating that tomorrow and therefore having two Ascension Days. 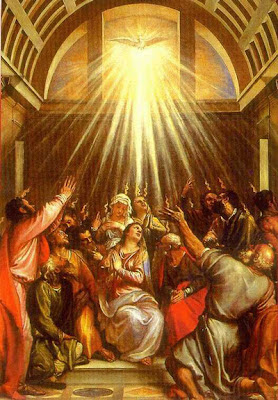 I can take other Holy Days being transferred to the Sunday but this day above all is linked directly to these nine days before Pentecost. Forty years ago in the interest of something Pentecost was stripped of its Vigil -- quite like the Easter Vigil-- and then of its Octave, now it has been stripped of its period of preparation.
One blogger suggested that all Catholics should make an effort to attend Mass at there diocesan Cathedral tomorrow, there is something very, very distasteful about using Mass to protest about anything but going to Mass to begin the Novena and to say the “Come Holy Spirit” would be a good thing.
at May 16, 2007

If the Bishops weren't such "Managers of Decline", they might well have tried to make more of the "Novena". What would St Charles Borromeo have done? Processions, Vigils, Penance but our Crew let's move it, what is next Good Friday on the nearest Sunday?

While I was under instruction in 1975 I took time off in my lunch hour to go to Mass at St John's, Duncan Terrace, Islington. The church was quite full. And ever after till I retired it was an opportunity to go to Mass in the place where I worked and so to make a connection there.

This was beneficial in all sorts of ways. Now, Catholics will no longer be attending Mass near their work.

What a stupid thing to do.

Could you please post the Novena to the Holy Spirit on your blog, Father?

Father, your local Catholic Secondary School has a good, sound theological piece on Ascension Day in its 'Newman News' on the web, and states cleary that this feast is celebrated on Thursday 17 May.

www.cncs.co.uk/
and click on the link 'The Newman News'

I do not think there are specific prayers for this Novena, formulaic prayers are a pretty late thing. The liturgy itself , and a consciousness of the coming feast is part of the preparation for Pentecost.
Here we say "Come Holy Spirit fill the hearts..." after Mass.

The link above gives a Novena to the Holy Spirit

according to the last link the novena begins on Friday 18th May (which is JPII's birthday by the way). Your initial post implied it starts on Thursday (please forgive me if I am wrong).

Friday the 18th is my birthday also so your post is the best gift I could possibly receieve. Thank you and I shall endeavour to say the novena and include you in my intentions.

Joseph,
Cogratulations on you birthday, I shall say a prayer for you.
I haven't had a chance to see the previous "last link" the original idea of the Novena, all Novenas is based on this period of nine days from Ascension day to the eve of Pentecost.
Novena comes from "nine", if you starte on Friday, it would include Sunday by which time the Apostles where out on the streets!


Oh, most beautiful flower of Mt. Carmel, fruitful vine, splendor of Heaven. Blessed Mother of the Son of God, Immaculate Virgin, assist me in my necessity, Oh Star of the Sea, help me and show me here you are my Mother. Oh Holy Mary, Mother of God queen of Heaven and Earth, I humbly beseech you from the bottom of my heart to succor me in my necessity (make request). There are none that can withstand your power.
Oh Mary, conceived without sin, pray for us who have recourse to thee (say three times).
Holy Mary, I place this prayer in your hands (say three times). Amen.

Say this prayer for three consecutive days and then you must publish and it will be granted to you.