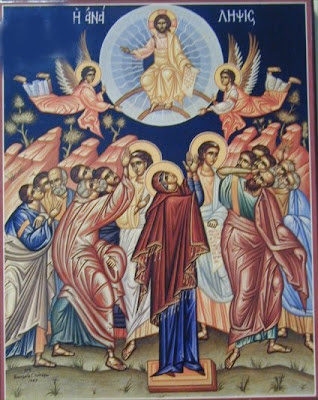 Like a dog with a rat, I keep returning to this.

Looking at someone else's blog, I'm not going to give a link, some commenter is complaining about a parish in my diocese where Ascension Day was barely observed, the prayers for feast were used but the readings were for a special Mass for first communicants. I suspect the truth of the matter was that they didn't realise it actually was the feast of the Ascension, when they planned the event or simply that there aren't now enough "ordinary" Sundays in the year, especially during First Communion/Confirmation season. I am being silly, but if we celebrated Ascension and Corpus Christi in the winter...

However, I had never thought of this parish as be the centre or even the fringe of Liberalism. On the contrary it is pretty middle of the road. I know the clergy, they are certainly not liturgical radicals and would certainly be shocked to be thought so.

But to me it seems as if we have lost contact with the very "idea" of Catholic liturgy, as being something we do in communion with the Universal Church, it happens everywhere in the UK, despite the fact that document after document reminds us that no bishop or priest can add, remove or change things in the liturgy. The more the Bishops "innovate", the more it will happen, their failure to pass on more than the vaguest whiff of the spirit of the Church's liturgical instruction the more the Catholic Church in this country will drift into its own very English little groove. It is amazing that we still do not have an English translation of the Enchirodon on Indulgences, or even the Book of Blessings, both the Roman Missal and the Book of the Gospels are apparently out of print, to say nothing of any approved set of hymn texts. I love our bishop's because they are successors of the Apostles but in matters liturgical they hardly have their finger on the button.

Yesterday I had to go up to Guildford on the train to see my father, I had the chance to start to read the Pope's book, there he talks, in the context of the temptations, of the biblical and patristic idea of "forty". Forty days in the wilderness representing the forty years of Israel wandering in the desert. Four, the idea of perfection multiplied by ten the number of commandments or words by which God reveals himself. I thought that the idea of forty days of fasting in Lent corresponding to the forty day of feasting from Easter until Ascension, sad we have lost this numerical stuff, it introduces us to "cosmic time"which the Pope talks a lot about in "Spirit of the Liturgy". It negates the idea of the Church, or the faithful if you will, actually be in the desert, the wilderness, in the upper room, as a Jew would understand their celebration of the feast especially Passover as being a real and actual "re-presentation", not "representation", of the biblical event, in which time and space are transcended.
at May 23, 2007

We will be coming to two significant '40 year' events in the next year or two - those of the anniversary of the issue of 'Humanae Vitae' (in 1968) and the promulgation of the new Missal (in 1969).

Maybe thereafter, we will begin to emerge from the '40 year' exile many of us have felt from the abandonment of the teaching of HV on the one hand, and the co-terminous decline in liturgical practice since the new Missal was introduced, on the other.

I said a prayer for your father. Please God he will recover his health soon.

May I contribute my own tuppenceworth?

I have spoken to a number of parishioners in my church and NOT ONE and I mean NOT ONE expressed any approval with the move of these very special feast days. On the contrary they were upset about it. I do agree that there is a lack of respect for the liturgy of the mass. Not too long ago our priest dropped the "Profession of Faith" in a mass which incorporated a small ceremony for the UCM group in our parish. Why he felt the need to do so was beyond me and I found it distressing. Looking to the future I think we are nearly at tipping point. Historically, the faithful did not have as much access to what was coming from Rome. Now we have, and you will see more and more people intent on "encouraging" our Bishops to be faithful.

Dropping the creed is nothing new to me. One priest in my parish routinely goes on for at least twenty minutes in his homily, walking around talking into a hand-held mic, then says, "We have a beautiful BAP-TISM immediately following this mass, so we will go on the the prayers of the faithful."

But then, why say it if you don't believe it. If you believed it, you would say it instead of droning on with your own personal creed, stories and the obligatory jokes not told all that well. But that's the school he comes from, the mass is my show, it's my personal creed that matters...I guess at bottom, he's a fundamentalist. He's certainly a protestant, whether he knows it or not...but I suspect he does.

Myself, I usually go out for a coffee, since I don't even consider it mass.

While I can understand your frustration and hurt in the absence of the Creed from the Mass at times, surely going out for a coffee and not even considering it a Mass is worse?

Regardless of the length of the homily, and whether it is good, bad, long, short or boring the Mass is still the Supreme Sacrifice and we can't pick and choose which parts of the Mass we want to attend - if this is our thinking behind participating in the miracle of the bread and wine being turned into the Body and Blood of the Lord, then we are just perceiving the Mass as no more than a spiritual supermarket, choosing the bits of it we want and leaving on the shelf the bits we don't.