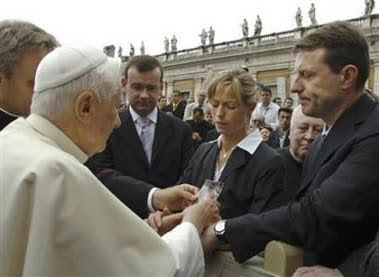 By DANIELA PETROFF in The Guardian
- Pope Benedict XVI held the hands of the parents of 4-year-old Madeleine McCann, blessing them and a photo of the girl as they asked for prayers Wednesday for their daughter who disappeared while vacationing with her family in Portugal.
The pope spoke with the parents, each dressed in dark suits, as he greeted dignitaries seated in the front row during his weekly general audience in St. Peter's Square.
``He was very kind, very sincere,'' Kate McCann told a news conference. She said Benedict assured them that he would ``continue to pray for Madeleine's safe return.''
``It was more personal than I ever could have imagined,'' said Gerry McCann, adding that Benedict immediately recognized Madeline's photograph.
``His touch and thoughts and words were more tender than we could have hoped and that will sustain us during this most difficult time,'' he said.
The Vatican had readily accepted the British couple's request to meet with the pope, as they press their campaign to publicize their daughter's disappearance. Devout Catholics, they recently prayed at the pilgrimage site in Fatima, Portugal, for her safe return.
The couple also outlined plans in the hunt for their daughter, saying they would travel to Spain, Germany and the Netherlands - countries that send many tourists to the holiday area in Portugal.
Gerry McCann brought a poster of his missing daughter, which has been widely distributed, to the news conference at the residence of the British ambassador to the Vatican. He said the family was asking people going on holiday to put up the posters to further publicize the disappearance.
He said he was grateful for the outpouring of solidarity. ``One evil act seems to be generating so much good,'' he said.
``Obviously we have very mixed emotions about being here, and of course why we are here,'' Gerry McCann said as he arrived in St. Peter's Square. ``In normal circumstances it would be one of the most exciting things we could do in our own lifetimes, but very much on our minds is the fact that we are here without Madeleine.''
A Vatican spokesman, the Rev. Ciro Benedettini, said British Cardinal Cormac Murphy-O'Connor had requested the McCanns' meeting with the pope.
``We are talking about a family drama that has touched world public opinion. It could not but touch the Holy Father, especially since these people are Catholics,'' Benedettini said.
``The Holy Father is considered the father of all, therefore he was personally touched as a father,'' the spokesman said.
Madeleine McCann disappeared May 3 when her parents left her and her 2-year-old twin siblings alone in their hotel room while they went to a restaurant in their hotel complex in Praia da Luz, a resort town in Portugal's Algarve region. Gerry and Kate McCann have said they won't return to Britain without their daughter.
Kate McCann is traveling with a pink stuffed animal - Cuddle Cat - that her daughter took to bed with her every night.
``We have no plans to go back to the UK at the moment. I can't even think about that now, to be honest,'' she said.
Pray for Madeleine and all children who are kidnapped, especilly those tens of thousands abducted to be child soldiers in Africa.
at May 30, 2007