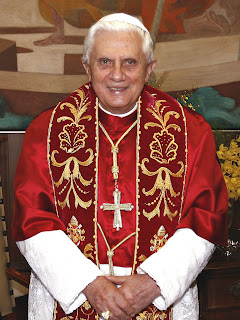 Dear Brother Bishops,
I welcome all of you on your ad Limina visit to Rome, where you have come to venerate the tombs of the Apostles Peter and Paul. I thank you for the kind words that Archbishop Vincent Nichols has addressed to me on your behalf, and I offer you my warmest good wishes and prayers for yourselves and all the faithful of England and Wales entrusted to your pastoral care. Your visit to Rome strengthens the bonds of communion between the Catholic community in your country and the Apostolic See, a communion that sustained your people’s faith for centuries, and today provides fresh energies for renewal and evangelization. Even amid the pressures of a secular age, there are many signs of living faith and devotion among the Catholics of England and Wales. I am thinking, for example, of the enthusiasm generated by the visit of the relics of Saint Thérèse, the interest aroused by the prospect of Cardinal Newman’s beatification, and the eagerness of young people to take part in pilgrimages and World Youth Days. On the occasion of my forthcoming Apostolic Visit to Great Britain, I shall be able to witness that faith for myself and, as Successor of Peter, to strengthen and confirm it. During the months of preparation that lie ahead, be sure to encourage the Catholics of England and Wales in their devotion, and assure them that the Pope constantly remembers them in his prayers and holds them in his heart.

Your country is well known for its firm commitment to equality of opportunity for all members of society. Yet as you have rightly pointed out, the effect of some of the legislation designed to achieve this goal has been to impose unjust limitations on the freedom of religious communities to act in accordance with their beliefs. In some respects it actually violates the natural law upon which the equality of all human beings is grounded and by which it is guaranteed. I urge you as Pastors to ensure that the Church’s moral teaching be always presented in its entirety and convincingly defended. Fidelity to the Gospel in no way restricts the freedom of others – on the contrary, it serves their freedom by offering them the truth. Continue to insist upon your right to participate in national debate through respectful dialogue with other elements in society. In doing so, you are not only maintaining long-standing British traditions of freedom of expression and honest exchange of opinion, but you are actually giving voice to the convictions of many people who lack the means to express them: when so many of the population claim to be Christian, how could anyone dispute the Gospel’s right to be heard?

If the full saving message of Christ is to be presented effectively and convincingly to the world, the Catholic community in your country needs to speak with a united voice. This requires not only you, the Bishops, but also priests, teachers, catechists, writers – in short all who are engaged in the task of communicating the Gospel – to be attentive to the promptings of the Spirit, who guides the whole Church into the truth, gathers her into unity and inspires her with missionary zeal.

Make it your concern, then, to draw on the considerable gifts of the lay faithful in England and Wales and see that they are equipped to hand on the faith to new generations comprehensively, accurately, and with a keen awareness that in so doing they are playing their part in the Church’s mission. In a social milieu that encourages the expression of a variety of opinions on every question that arises, it is important to recognize dissent for what it is, and not to mistake it for a mature contribution to a balanced and wide-ranging debate. It is the truth revealed through Scripture and Tradition and articulated by the Church’s Magisterium that sets us free. Cardinal Newman realized this, and he left us an outstanding example of faithfulness to revealed truth by following that "kindly light" wherever it led him, even at considerable personal cost. Great writers and communicators of his stature and integrity are needed in the Church today, and it is my hope that devotion to him will inspire many to follow in his footsteps.

Much attention has rightly been given to Newman’s scholarship and to his extensive writings, but it is important to remember that he saw himself first and foremost as a priest. In this Annus Sacerdotalis [Year for Priests], I urge you to hold up to your priests his example of dedication to prayer, pastoral sensitivity towards the needs of his flock, and passion for preaching the Gospel. You yourselves should set a similar example. Be close to your priests, and rekindle their sense of the enormous privilege and joy of standing among the people of God as alter Christus. In Newman’s words, "Christ’s priests have no priesthood but His … what they do, He does; when they baptize, He is baptizing; when they bless, He is blessing" (Parochial and Plain Sermons, VI 242). Indeed, since the priest plays an irreplaceable role in the life of the Church, spare no effort in encouraging priestly vocations and emphasizing to the faithful the true meaning and necessity of the priesthood. Encourage the lay faithful to express their appreciation of the priests who serve them, and to recognize the difficulties they sometimes face on account of their declining numbers and increasing pressures. The support and understanding of the faithful is particularly necessary when parishes have to be merged or Mass times adjusted. Help them to avoid any temptation to view the clergy as mere functionaries but rather to rejoice in the gift of priestly ministry, a gift that can never be taken for granted.

Ecumenical and inter-religious dialogue assume great importance in England and Wales, given the varied demographic profile of the population. As well as encouraging you in your important work in these areas, I would ask you to be generous in implementing the provisions of the Apostolic Constitution Anglicanorum Coetibus, so as to assist those groups of Anglicans who wish to enter into full communion with the Catholic Church. I am convinced that, if given a warm and open-hearted welcome, such groups will be a blessing for the entire Church.

With these thoughts, I commend your apostolic ministry to the intercession of Saint David, Saint George and all the saints and martyrs of England and Wales. May Our Lady of Walsingham guide and protect you always. To all of you, and to the priests, religious and lay faithful of your country, I cordially impart my Apostolic Blessing as a pledge of peace and joy in the Lord Jesus Chris
at February 01, 2010

"...it is important to recognize dissent for what it is, and not to mistake it for a mature contribution to a balanced and wide-ranging debate."

The Holy Father's concern about the equality legislation that was defeated in the House of Lords last week is significant, because it makes clear that he objects to the interference by the United Kingdom with his sovereign rights.

If anyone tries to take the Church to court over matters like this, it might be worth asserting sovereign immunity at common law or the State Immunity Act 1978, with respect to acts done under colour of ecclesiastical authority.

Well, I can only find one small fault with it, otherwise it's right on.

The small fault is that there is no "or else" for those bishops who are being the pain in the butt. "Hey, bishop X, Y, and Z -- yes, I mean YOU -- get with the program, or you'll be kicked somewhere to count holes in the accoustical tile before you can say John Bull."

That bit about not mistaking dissent for "a mature contribution to a balanced and wide-ranging debate" reminds me of something Cardinal Arinze said in Westminster Cathedral a few years ago: "A child who fails to listen to his parents is not a 'liberal intellectual' - he is a BRAT!"

Our Holy Father writes ....'Even amid the pressures of a secular age, there are many signs of living faith and devotion among the Catholics of England and Wales'.

Yes, but this is 'inspite of' not 'because of' the Bishops of E & W. I hate to sound-off on such sensitive issues, BUT the evidence is crystal clear - even amidst the last few posts on your Blog Fr Ray we have these notable stories:

and that's just in the last four weeks or so. There are exceptions of course and Bishop O'Donoghue comes immediately to mind. He is one of those 'signs of living faith and devotion among the Catholics of England and Wales' that Pope Benedict must be talking about together with so many good and faithful Priests up and down the Country who are berated on a daily basis by such 'good catholics' as those who would join outrageous dissenting groups like Catholics for a Changing Church and those who see Summorum Pontificum as some outdated and backward looking 'foreign' practice.

Let's hope and PRAY that our Bishops come away invigorated with the Spirit of the Vatican and that the Successor of Peter succeeds in bringing his 'Crew' back in line with the Church of Rome.

Please let's recite The Prayer for England while our Bishops are in Rome absorbing the Holy Father's wise spiritual and practical counsel.

So sad, that the Holy Father failed to impart his blessing on the many faithful deacons in England and Wales, Many foget deacons are not priests, religous or the lay faithful

Thank you Father.
I note that the instruction is not to "continue with the work you have been doing."
By quoting Newman he is clearly indicating that this is not a foreign instruction but the chance to follow a great Englishman.
I enjoyed it. Some bishops may not.
Many times good.

Absolutely wonderful. No waffle at all. Judging by the remarks about St Therese, and the secularists etc - he has been kept very well informed for a good while about the state of things . This great Pope has politely but firmly set his agenda out for the future. The remark about dissent - absolute genius. The precedence of Ang Coet over Arcic - so subtle. Everything you highlighted, Father, I would also have highlighted.

Please don't think I am being flippant or rude but - if the Holy Father thanked everyone who contributed to the Church in England and Wales - it would end up like an Oscar speech. Catholic teachers, catechists, EMHCs - all, I am sure will be noticed and thanked when (d.v) he visits here.

Will they listen or just hear? I am afraid the efforts to remain and drag more into de facto schism overwhelms them. There is no John Fisher among them yet! We must pray for faithful families who will give faithful priests who will be faithful bishops. I am waiting with hope.

Some of the Points raised by the Holy Father are remarkably like my slightly jokular spoof of the first draft of the Papal talk which I put on my own blog. Perhaps he reads my blog as well as yours Fr Ray !