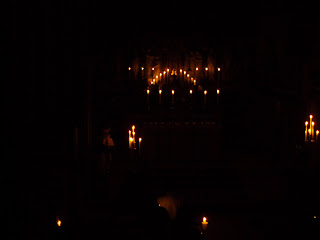 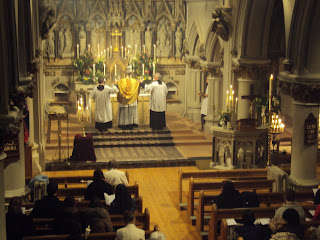 A BLESSED AND HAPPY EASTER TO YOU ALL 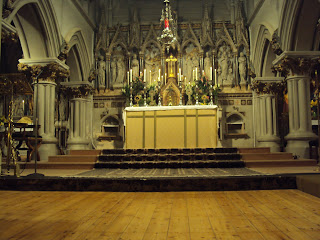 Rain forced us to have the pascal fire on the church steps, at the second Lumen Christi the candle went out so we had to go back to the fire to relight it.

I know it is not strictly rubrical but here we keep the electric lights off until the offertory, call me an old reactionary, but I don't consider "the electricity"liturgical. So the Exultet, the readings are done in the light that has come from the Paschal Candle. At the Gloria the Big Six are lit and the candles are lit on the altars.
I didn't quitye know what to do now we have moved the font back to the rear of the church. We processed down to baptistry, I invited the faithful to follow on so they where gathered around, the font was blessed and we renewed our baptismal promises there and I threw vast quantities of baptismal everywhere and processed around the church sprinkling everyone more or less individually during the Vidi Aquam.

The choir was on good form, we decided to sing the graduals in place of the responsorial psalms, which worked well. They are getting really quite good at chant.

Despite it being a wet and foul night, again the numbers were noticeably up on previous years. I'll be interested hear about the rest of the world, I had a few emails from different parts of Ireland, who said the church's were unusually full this year
at April 04, 2010

A very blessed Easter to you, Father!

In hard times Father even those of us who are a little shall i say hit and miss at attending Mass, make a point of going because for the majority of us it is our way of showing support not just for the Church but for all of you on the front line line, our wonderful Priests.

A joyous and blessed Easter to you.
Just wanted you to know that I enjoy reading your blog daily, finding it both informative and spiriually uplifting.

God bless you abundantly for all the good work you do.

Excellent Vigil Father Ray and as you saw, the pews were packed this year.

The naysayers & assorted HEATHEN have been put in their places.The Church is as strong as ever.

Without Faith we are doomed and we do not want the garbage being constantly rammed down our throats in the name of FREEDOM.

Father, I am sorry to be a pedant, but "Christus Resurrexit est" is not Latin. "Resurrexit" is a third person singular perfect, indicative, active verb and stands on its own, so the "esr" is superfluous. "Christus resurrexit" is correct as regards latinity, but the usual acclamation is "surrexit Christus".
Happy Easter!

I help out with the car parking at my local church in Epsom, Surrey. I have never known so many people coming to the church. It is the most I have ever seen.

According to the Press Association:

Easter Sunday Mass at Dublin’s Pro Cathedral was briefly interrupted as protesters placed children’s shoes at the altar to represent the victims of clerical sex abuse.

Around five people walked to the steps of the altar where one man shouted “shame” at Archbishop Diarmuid Martin, who was celebrating the packed Mass.

Other protesters who mingled outside the city centre cathedral claimed they also tried to leave shoes but were prevented by gardai.

This seems to have been organized on indymedia:

A very happy Easter, Father, and thank you for all the good work you do.

Happy Easter to you, Father.

For the Vigil last night, I went up to Prince of Peace Abbey (Benedictines) in Oceanside, Ca. [About 45 minutes north of San Diego.) The Vigil started quite late, about 9:30. There are about 20 monks. The crowd was pretty good, about 200 or so souls journeyed up the winding road that leads to the top of "Benet Hill" [they have a whole hilltop to themselves. They had a fire built, and one of the monks tended the fire for some time before the monks were ready to process to the fire (the rest of us were gathered around it). Just about two minutes the nicely stoked fire ALMOST ran out of fuel! Had they been a minute or two later, I think we'd have been reaching for the bushes for more fuel! But the Abbot didn't mess around and got that Candle lighted really quickly. And we were lucky that it was a still night and the candle stayed lt without a problem. Then we processed in, in complete darkness save for the candlelight. We remainded with just the candlelight all through the exultet. There being no baptisms or confirmations, the monks opted to read or chant all 15,000 reading. Wisely, there were some periods of standing aright and in awe there too, so assist the pew sitters in not falling into a comalike state. The water was bless and the Abbot dispatched the Holy Water with efficient abandon. I was delighted to see the young deacon, who'd sung the exultet. I'd first met him about 2.5 years ago when he was a little past midway in his seminary training. He and another man are to be ordained to the priesthood this year. I think this was the first Easter Vigil Mass I attended where NO ONE thought "hey, it's a GREAT choice of Mass with our 8 small, rambunctious children." Mass ended around midnight, just in time for us all to have light refreshment afterwards and wish Happy Easter.

This morning I went to a low Mass in the EF form. Beautiful. Congregation was slightly less than it normally would have been (which was still full) but in this case it would be due to more people opting for the full on Solemn High Mass with all the stops pulled out. Even at the low Mass there was a visiting deacon in choir (who is to be ordained this May, along with a home grown product from our parish this May. So WHO says there aren't any new priests coming along?

A joyous and blessed Easter to you, Father. May your spiritual and temporal work bear abundant fruit in the coming year.

It did not affect me because I had been earlier, but my eldest son was at the 11-00 am Mass at my Parish Church and when he came home he complained that he could not get into the church because it was so full, so quite a crowd had to remain outside, where a large TV showed the Mass going on inside. He didn't like it but it was the best that could be done given the size of the crowd.
JARay

A blessed and happy Easter to you Father :)

FWIW Father,
the congregations were notably larger than normal (for Easter Day) yesterday at the London Oratory : and Communicant numbers were also high - so much so that the 10:00, 11:00, and 12:30 all started (increasingly) late !

Yes, full to overflowing at the 7:30 am Mass in my parish yesterday. Probably due to: 1. there not being a 5:30 vigil Mass on Saturday; 2. People opting for a 'shorter' liturgy; or 3. Seasonal attendees... But, great to see a 'full house'.

Attendances at my parish (St Mirin's Cathedral, Paisley) were all well up on previous years too especially on Holy Thursday and at the Easter Vigil (which I had never seen so busy). There were also eight adults baptised that evening so lots to be positive about. Hope you've got rid of those blues, Father.

Fr Mark - In re your supposed pedantry; given the widespread ignorance of Latin (including my own; cue lots of mea culpa thingies), once we start to dismiss comment like yours as mere pedantry, we start entrenching that which we should be trying to expunge. That is to say that we start making the Vulgate (i.e., language of the people) REALLY vulgar (i.e., nasty).
Just before leaving the subject, where DID this blunder occur?
By the way, Gobintheocean (4/4/10 6.40 PM) ought to know that the so-called Pig Latin is actually 'Cockney backslang', another example of which is my advice to him and his sans-culotte attitude - etgay ostlay.

Dire attendance at the Vigil down here in the West Country - barely half full, in stark contrast to previous years.

And that was the only Easter Vigil Mass for what had been three parishes, merged last year.

I am worried that this is a sign of the future - that if Bishops re-organise parishes as part of a "managed decline", then decline is what they will get.