Silly Boy in the Foreign Office, what does it say about government competence? 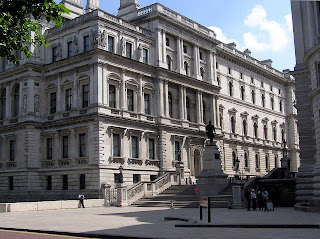 I am sure you have seen the Foreign Office document, let's not get it out of proportion. It is amazing that it should have been passed to senior members of the committee, nevertheless it was written by a silly boy who has now been moved. That could be the end of the story but it is not, it should raise lots more questions.

The problem is not so much the insult to Catholics and the Pope, that is easily forgiven but that it does indicate a certain lack of seriousness in the Foreign Office, a certain lack of professionalism, an ignorance of the subject, that is what worries me. I can cope with puerlity but I don't think we should put up with ignorance when dealing with foreign powers, even if that foreign power is a pussey cat like the Holy See. Is such ignorance and unprofessionalism present when dealing with other powers? The silly boy in the Foreign Office seems ignorant of the what the Pope is actually doing, unaware of the Church's help to AIDS victims for example. Innocent on SMSB expands the list and takes similar stand.

At this election time we should be asking: does David Miliband the Foreign Secretary have a grip on his department? Is it fit for purpose?
at April 25, 2010

It is more than just a single silly boy in the FO.

The FO "policy" was not to appoint a Catholic as ambassador to the Holy See!

Tony Blair highlighted the anti Catholicism at the FO.

What worries me, Father, is this. The FO civil service is meant to be the very cream of Government service, only the very best and brightest even get a foot in the door. It is convenient for the Mandarins to dismiss the event as the ramblings of some "silly boy", but it does highlight a mindset.

Reminds me of the old joke:

American tourist in Whitehall, stops policeman and says "Which side is the Foreign Office on?"

PC: "Well, it's supposed to be on the side of the United Kingdom, but these days, we aren't sure."

So the silly boy has been slapped on the wrist and 'moved to other duties'. Now, if he had circulated a memo suggesting that people might pray for the success of the Holy Father's visit....

Jack Valero's response to this was not adequate according to some

Glad you have commented on this. This isn't even undergraduate wit. The "amusing comments" are the kind of thing one would expect from the Lower Sixth.

Now what does that say about not just the Foreign Office, but how civil servants are recruited?

Unless things have changed drastically in the past few decades, which seems unlikely, civil servants are selected by exam and interview, with the aim of finding the best brains in the land.

The ideal was young people who could apply their minds to anything equally well, by gathering all the information and then applying their minds to the problem in hand.

Thus, the recruits were not allocated to the department dealing with a matter relating to their degree subject, because all were expected to be generalists able to apply themselves to anything.

This would help to explain not just the present unfortunate incident, but long-running fiascos such as defence procurement, Britain's transport non-policy and the muddle and waste associated with that, the shambles that is the Department for Environment, Food and Rural Affairs, and the disastrous mishandling of Britain's economy, the longest-running farce in the history of show business.

There is hardly an area of British public policy that is being done right, and whilst politicians must take much of the blame, the civil service mandarinate has become part of the problem. It needs to be reformed, but how can this happen?

1569 rising
'The FO civil service is meant to be the very cream of Government service, only the very best and brightest even get a foot in the door. It is convenient for the Mandarins to dismiss the event as the ramblings of some "silly boy", but it does highlight a mindset.'

They probably are the cream, but they are highly intelligent blithering idiots. If you doubt it, take a look at this saga on another issue altogether, of no political importance whatsoever.

DfT civil servants managed to waste £50 million on a madly extravagant proposal for replacing the inter-city 125 trains before the cost of the thing, which nobody wanted, had escalated out of control and eventually the plug was pulled on the project.

These people are completely out of touch. They make a mess of everything the put their fingers on.

There is a serious problem at the FCO. Someone at the FCO finds abortion funny.

I don't think this was a junior member of the Civil Service though - surely to be involved in the planning for a State Visit one would have to hold a position of seniority - just a thought!

He may be a silly boy, but as a tax payer I pay his salary!!!
This is not acceptable behaviour for a public servant and he should be sacked.

Cameasaonymous - I'm glad I'm not the only one who had this thought when I heard that the culprit had been 'transferred to other duties'.

I know that the offence (ie making unpleasant purile comments) is trivial when compared to the abuse of children, but I cannot help feeling that the use of this particular sanction is far more insulting than any of the remarks made.

Many of us ordinary Catholics have been deeply saddened, even angered, by the scandals that have recently come to light, and are anxious to see that such things never occur again. It is bad enough to have the press constantly denigrating the Church and the Holy Father, without having the FO seeming to mock the great steps that have been, and are being, taken to ensure the highest standards of child protection are to be offered by the Church.

I do hope we are not getting apoplectic about all this nonsense, these people in the FO are after all a different tribe to the rest of us.We are after all being run by the product of the Public School System,we have seen pictures of the likes of Cameron,Clegg & Johnson all over the place.They are the people who think they should be allowed to run this country.

If Catholic,s are going to be silly enough to vote for these HEATHEN then they can expect a lot more of this GARBAGE

Incidentally, did you know the Iceland volcano was set off on the personal instructions of the Pope.

Catholic Student said "There is a serious problem at the FCO. Someone at the FCO finds abortion funny."

That was the first thing that came into my head. Great minds think alike.

As "Yes Minister" once put it the Foreign Office is there to represent foreignors.

I find it odd that the bishop quoted in yesterday's Sunday Telegraph describing this puerile document as 'appalling' and as saying 'It’s outlandish and outrageous to assume that any of the ideas are in any way suitable for the Pope' is the same bishop who the other day appointed as Deputy Director of the Catholic Education Service of England and Wales a politician who has actively promoted abortion, same-sex 'marriage' or its equivalent, homosexual activity between minors and who has opposed the right of parents to know when their minor children are in serious trouble, not to mention his promotion of condoms.

The civil servant who wrote the offending document has at least been given a slap on the wrist. The 'Catholic' anti-life and anti-family politician is now working officially for the Catholic Church in England and Wales.

Apart from anything else, this decision is an outright rejection of Vatican II which called lay people to holiness and to live out the vocation of their baptism in the world. This new employee of the bishops has done the very opposite.

There seems little point in becoming indignant as this is a set up.

Given the profound ignorance demonstrated by one of our supposedly brightest and best educated I wonder if it would be a good idea for all those involved in planning the Pope's visit within the civil service and Government to be invited to a crash course in Catholicism; theology, philosophy and social teaching and incorporating an outline of the nature and extent of charitable activites of the Catholic Church throughout the world.

While it would be unlikely that we would witness a mass conversion it might, at least, be possible to raise their game just a little.

What do you think?

I do not think that the Vatican will be too surprised. Pope Benedict XVI in his Jan. 11 2010 address to the members of the diplomatic corps. said

"Sadly, in certain countries, mainly in the West, one increasingly encounters in political and cultural circles, as well in the media, scarce respect and at times hostility, if not scorn, directed towards religion and towards Christianity in particular,"

However there is increasing awareness that such an attitude on the part of Diplomats is very short-sighted.

See Diplomacy in an Age of Faith at

Mind you the Foreign Office does have recent form about make insulting comments causing diplomatic problems. See, for instance:
David Miliband is an embarrassment strutting the world stage at
http://www.telegraph.co.uk/comment/columnists/andrewpierce/4316661/David-Miliband-is-an-embarrassment-strutting-the-world-stage.html

Miliband's trip to India 'a disaster', after Kashmir gaffe at

Perhaps the Foreign Office is still trying to get up to speed in the matter of Religious Diplomacy and the importance of Religion in Diplomacy.

It wasn't the "silly boy" who distibuted that nonsense to the Pornmongering press,he was instructed to send it to various branches and one of the recipients was Nicola Ware,a miscreant if ever there was one gave it to the Garbage Press.

You could bet your life that there are a few screws missing in that one,should be sectioned for the public good and safety of the Planet.

And it would be OK if we didn't know about it?

It wasn't a "silly boy" behind this: it was a 31 year old man, another graduate of Balliol, named as Anjoum Noorani in the Telegraph and in the Mail today.