There is an interesting series on 20th century Popes on Vatican Insider. 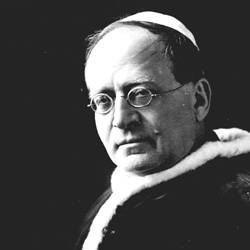 Pius XI
Pope Ratti disdained any form of nepotism, never granting special audiences to family members. When one of his engineer nephews did some work in the Vatican, Pius put in writing that the work would not be paid. He was also allergic to flatterers. A pope of great missionary impulses, under his pontificate eighteen agreements would be concluded with various states for the purpose of guaranteeing the greatest freedom possible to the Church. On 13 May 1929, he said «When it is a question of saving souls, we would feel the courage to deal with the devil in person». 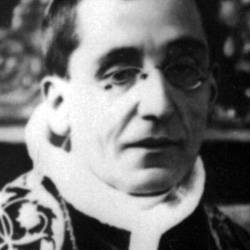 Benedict XV
Reflective in character, not afraid to lose his temper, but extremely resolute, the Pope of the Church loved punctuality, to the point where he gave watches to his colleagues, telling them: “Here, take this. This way you will never have an excuse to arrive late.” In one of his autographs of 1915 he writes, “A good watch can help us in being careful and ready for every appointment, without wasting time on useless anticipation or appearing discourteous with unjustified delays.” Indeed, that focus on punctuality will be fatal to him when, at dawn on 17 November 1921, he had to wait a few minutes for the gendarme to open the door of the Sacrament Room in Saint Peter’s Basilica. He had to go say Mass that morning for the sisters of Santa Marta, and that brief wait in the chilled air gave him a cold that turned into bronchitis, carrying him to his grave on 22 January 1922.

Wasn't "Papa Ratti" a mountaineer? I recall in my youth staying in a climbing hut in the Lake District maintained (well, perhaps, better to say, run) by the Achille Ratti climbing club. This was on school fell walking trips.

What is a sacrament room?

Ratti was indeed a mountaineer and a very accomplished one. He was a fine linguist also and someone not to "mess with" as one French Cardinal discovered who refused to sever his links with the fascist Action Française.

A curious feature of BXV was he presented a peace treaty in 1917 which was rejected by both sides during the Great War. Instead Versailles was imposed 2 years later - surely one of the most disastrous "peace" deals in history

Joe:
Yes, he had been, and a well respected one. (Achille Ratti)

One of the British Everest expeditions of the 1920s or 1930s (i`ve forgotten which year) called in on him; and he gave the members a blessing: "May the God Who dwells in the heights..."

The club you mentioned is still going strong! Try Googling.

I have just googled, and looked at the page showing their huts: http://www.achille-ratti-climbing-club.co.uk/huts.php

The hut I remember staying in was the Dunmail Raise hut - this was a long time ago - my memories of it are "basic", but I expect that it has undergone some development since my stays in the late 1970's.

I have a particular memory of a morning gallop up the fell across the road from the hut and back again .... and then breakfast.

Action Francaise was NOT "fascist", it was monarchist, albeit in favor of the Orleans branch rather than the Bourbon. It was also French nationalist, yes, meaning at the time that it disparaged the Germans. Since virtually nothing of Charles Maurras's writings is translated into English (one can wonder, or perhaps speculate, why) I do not know why he favored the Orleans (who in any event disclaimed the AF)--my information comes largely from a talk given by Prof. Claude Polin. Then there is the Roman condemnation of the "Action Francaise" newspaper, and the subsequent discplining of Cardinal Billot and Fr. Le Floch (rector of the French Seminary in Rome).

There are some, including the late Archbishop, who thought that these were prudential errors of the Holy Father, grouping them with the similarly misjudged order given to the Mexican Cristeros to lay down their arms (whereupon, it is said, at least 5,000 were murdered by the Masonic Mexican government forces).

None of this is to detract in the slightest from the force of Pius XI's great encyclicals, but there should be some perspective here.