From a Corner of Archbishop's House 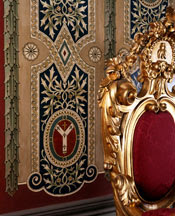 Far be it from me to report on one of those covert conversations held in a huddle in a corner of Westminster’s Archbishop’s House, let alone one held close to the throne, partly because I never over hear them normally.
But...
This one I was involved in, and yes there was a senior cleric or two involved, we were praising the Bishops of England and Wales for re-introducing “meatless Fridays”, my bishop came in for a great deal of praise. One of our number who has an enormous factory in his parish said a parishioner had reported a run on fish and chips and the veggie options had run out in the works canteen and that even the lapsed were being encouraged to abstain by their practising workmates. Another priest friend had said more or less the same before the Reception. I know from comments on the blog that in some places it hasn’t even been mentioned.
One priest said that he thought it was a bit of a shame that the motivation behind it was sociological, rather than ascetic, spiritual or liturgical.
A bishop said he thought it was a good thing that people were given the option of making a commitment to the Church over and above the Sunday Mass obligation, someone mention Holy Days and the bishop was called away.
A young layman joined us and the conversation moved to “Catholic identity” which was the stated reason for the re-introduction, looking around at the Ordinariate clergy, most were dressed in soutanes and fascias, he said we clergy could do a lot by dressing as priests and being seen as obviously Catholic priests, rather than simply as clergymen, in private and public.
One priest suggested bringing back the tonsure, maybe only partly frivolously. The conversation took a turn towards a criticism of the Seminaries for discouraging clerical dress until a seminarian actually becomes a cleric at the diaconate.
The conversation moved on to other areas that could underscore “Catholic identity”, mostly concerning the signs associated with the sacredness of the Holy Eucharist, kneeling for Holy Communion, seemed to be uppermost. From our little coetibus I was surprised how many priests seemed keen on the idea and had made provision. When we turned to re-orientating the Mass, no-one deferred, everyone said it was absolutely essential. When someone asked, the young layman I think, which of the clergy would be the first to do it, we all looked at our feet, except for an Ordinariate priest who said. “I’m doing it Sunday”.
at September 29, 2011

Great story, Padre. Shows us what a blessing the Ordinariate Priests are as well.

Yeah but, no but. We don’t have the info on whether the priest in question was celebrating Mass for Catholics of the Ordinariate.
The dilemma for priests at established Catholic churches is that an attempt to celebrate ad orientem might well generate complaints to the bishop about Father Turning His Back On Us.

georgem,
Yes it was for an Ordinariate parish, thy don't have a problem with it.

Yes for the rest of us it is fear.

You are right about the complaints to the Bishop. I have been physically present when this happened - in front of the priest as well. Luckily there were voices raised to defend him, as well.

I found out last week that our sister parish in Dorchester is celebrating Mass ad orientem during the week. How long this has been going on I don't know, but the silence would indicate that there has not been any fuss.

Because like the Jews then, they have been taught badly; they have received false traditions, as the Jews had received the traditions of the Pharisees, and are blind when they think they see, and are prejudiced against the truth, and shocked and offended when they are told it.

And, as the Jews then passed over passages in Scripture, which ought to have set them right, so do Christians now pass over passages, which would, if dwelt on, extricate them from their error.

For example, the Jews passed over the texts:

“They pierced my hands and my feet,” “My God, My God, why hast Thou forsaken Me?” “He was rejected of men, a man of sorrows and acquainted with grief,” which speak of Christ.

And men nowadays pass over such passages as the following which speak of the Church:

“Whosesoever sins ye remit, they are remitted to them”; “Thou art Peter and upon this rock I will build my Church”; “Anointing them with oil in the Name of the Lord”;

“The Church the pillar and foundation of the truth”; and the like.

They are so certain that the doctrine of the one Holy Catholic Church is not true, that they will not give their mind to these passages, they pass them over.

They cannot tell you what they mean, but they are quite sure they do not mean what Catholics say they mean, because Catholicism is not true.

In fact a deep prejudice is on their minds, or what Scripture calls blindness.

They cannot tell what these passages and many others mean, but they do not care.

They say that after all they are not important which is just begging the question and when they are urged and forced to give them a meaning, they say any thing that comes uppermost, merely to satisfy or to perplex the questioner, wishing nothing more than to get rid of what they think a troublesome, but idle, question.

There is a famous song on video of the Crucifixion:

Every time a Padre says the Tridentine Mass, we are at Calvary.

It always irritates me when those who dislike the celebration of Mass ad orientem trot out the old "priest with his back to the people" nonsense.

Would they also accuse my great uncle,an infantry officer in WWI, as having been killed "with his back to his men"?

I think explanation helps. I look at you when addressing you and we will all look to the heavens when addressing God! People get that...an Eastward facing Ordinariate priest! That said my lot yearn to be Catholic and I mist say our new lot (the established Catholics) seem to prefer being Methodists....no ceremonial and truly appalling ditties for hymns.

Nothing has been said in our local parish and neighboroung parish here in Staffordshire about Friday Abstinence. It wasn't mentioned in a recent Pastoral letter. Sad.

John F,
It happens. St B's at Dorchester is so tiny it couldn't happen otherwise. It happens elsewhere, just normally quietly, most people prefer it.

However a very few don't and they tend to be the noisy, disruptive "progressives", they also tend to be old and tend to claim ownership of the Church.
I still get panic attacks when I see a man who once disrupted an ad orientem Mass I was saying by shouting abuse and screaming like a thing possessed.

"...I still get panic attacks when I see a man who once disrupted an ad orientem Mass I was saying by shouting abuse and screaming like a thing possessed..."

He probably was possessed.

If people knew how often the Devil interacts with them on a daily basis, and takes possession of their hearts and then their souls, they would die of fright.

Peter turned chicken when a little girl asked him if he was a follower of Jesus.

When Peter took account of the wind, he always faltered.

He was terribly weak when it came to his personal feelings.

In his Holy Ministry, he was fearless.

Thus the Priestly cry unto the Lord: "Clothe Me, O Lord"

We always pray the Holy Mother protect and defend you; we have asked the Mexican Martyrs and Saints to stand with you.

When the wolf comes around snarling and threatening, it is because he is losing.

An Exorcist Priest told me that.

In times of anxiety think of your Sheep in danger.

The Devil will come to regret trying to frighten you.

Many years ago at St Mary Magdalen, Mass was attended by an old gent who'd served as an officer in WW1. He was a sweet and kindly old man, until the pp Fr. Smith started preaching.
At which point something triggered the old gent to stand up and attempt to debate philosophical points.
A severe "Sit. Down." by Fr. Smith had its effect, my parents whispered "shell shock" and the service continued.
Disruption isn't new, but tittle-tattling to the bishop and a tendency in some parishes to bully the pp are two of the fruits of We Are Church. Just by casual observation one can tell who they are.
The Pope has blessed us with the Ordinariate. Thank God for them and for every wonderful priest who has completed the obstacle course to Rome.

I take your point Father.
You and your brother priests are in the front line.

We will have to work on all these points. Kneeling for communion will obviously take a little time, but I think that the bishops promised consultation on reinstating Holy Days. Has anyone been consulted? I douby whether such a thing would ever happen in my diocese.

A small point: "coetibus" is either dative or ablative plural. to, for, by, with or from groups.

Expecto,
I thought the reader would understand I was speaking of ab nostra parvibus coetibus in angulari.