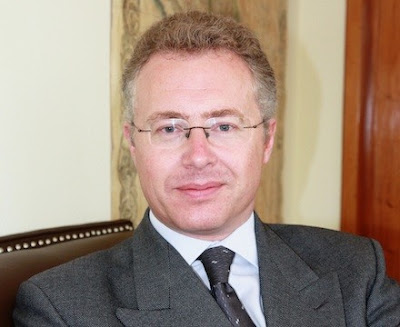 Nigel Baker, the former Private Secretary to the Prince of Wales has presented his credentials to the Holy Father as Ambassador Extraordinary and Plenipotentiary of the United Kingdom of Great Britain and Northern Ireland to the Holy See.

A large part of the Pope's speech was concerned with the summer riots in Britain:


......... I take this opportunity once again to encourage all who would resort to violence to put aside their grievances, and to seek instead a dialogue with their neighbours for the peace and prosperity of the whole community. As you pointed out in your speech, your Government wishes to employ policies that are based on enduring values that cannot be simply expressed in legal terms. This is especially important in the light of events in England this summer.

When policies do not presume or promote objective values, the resulting moral relativism, instead of leading to a society that is free, fair, just and compassionate, tends instead to produce frustration, despair, selfishness and a disregard for the life and liberty of others. Policy makers are therefore right to look urgently for ways to uphold excellence in education, to promote social opportunity and economic mobility, to examine ways to favour long-term employment and to spread wealth much more fairly and broadly throughout society. Moreover, the active fostering of the essential values of a healthy society, through the defence of life and of the family, the sound moral education of the young, and a fraternal regard for the poor and the weak, will surely help to rebuild a positive sense of one’s duty, in charity, towards friends and strangers alike in the local community.

Couched in diplomatic language it strikes me that the Pope is actually being highly critical of contemporary British society.
+++added later

There is certainly plenty to criticise.

We could be in the Guinness Book of Records for the 200,000 abortions that are performed annually and that pregnancy advice is only allowed to be given by the "charitable organisations" BPAS or Marie Stopes who are filling their boots

I find this kind of "rebuke" very confusing.

On the one hand the Pope is saying that politicians and technocrats need to put forward policies that "presume or promote objective values."

Nonetheless, he those same people "to look urgently for ways to uphold excellence in education, to promote social opportunity and economic mobility, to examine ways to favour long-term employment and to spread wealth much more fairly and broadly throughout society... [and to foster] the essential values of a healthy society, through the defense of life and of the family, the sound moral education of the young, and a fraternal regard for the poor and the weak."

This is exactly what everyone thinks they are doing with each new policy. Those who have deconstructed western culture and undermined Catholic values ALWAYS do it in the name of the people, the young, for education, based on fairness and rational principles.

Fully endorse nickbris' remarks. The Chief Executive of MSI trousers over £200K pa (according to the Marie Stopes annual report). What other British Industry is growing at approx 2% per annum?

I wonder if the reference to agencies is to the adoption agencies whose work is shown to be necessary by the Martin Neary report.
What a cunning reference to Ireland whose government has responded to badly to the Holy See's own response.
As ever, thank you Father