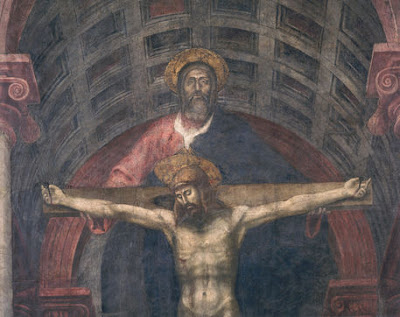 I am convinced that people flocked to the Church in the first centuries because of its kerygmatic proclamation of the doctrine of the Trinity.

The letters of the Apostles preceded the writing of the Gospels and are more concerned by what the Father, Son and Spirit did and continue to do through the Pascal Mystery, than details of Jesus' life or even his moral teaching. The thrust being, in order to reconcile us to himself, and enable us to share his inner life God sent his only Son to suffer and to die for us that we might share in his Sonship, and to those who became sons the Holy Spirit was sent to sanctify them and to transform them. This transformation, healing, sanctification was noticeable to both those inside and outside the Church. They experienced healing.

Simply, its message was once we were strangers, through Christ and his Church God becomes our Father, and we become sons. Ultimately the kerygma is about family and Divine Fatherhood.

During the summer riots, practically everyone, left or right, pointed to the root of the problems as being a breakdown in family, and at the heart of the break down, most suggested, an absence of a "father figure".

I was recently sent a document on sexual disorders and their treatment, written by a psychiatrist and therapist, the basic argument was that homosexuality and other sexual disorders were caused by peer rejection in childhood and ineffectual fathering, really the absence of a loving father.

The writer claimed that healing came through forgiveness of the hurt done by one's natural father and coming to understand the love of our supernatural Father. That, he claimed transformed the lives of his clients.

I do not think that relationships and psychology of the Greco-Romano world were any different from those of our own time, people were if anything even more neorotic than us. Indeed riot, sexual abuse, violence, financial and emotional insecurity, fragmented families seem, from the literature of the time, to have been even more prevalent. It was against this background that the message, "God wants to be you Father and can change you", was preached to such an extraordinary effect.

Ezekial and the Gospel remind of the importance in the spiritual life of fraternal correction, "fraternal" correction can only happen within a family.

One of our parishioners spent a few days recently with a Catholic of the old school, whose response to every problem in the Church was: why doesn't the Pope just excommunicate them? I am not unsympathetic to that suggestion but actually that has never normally been the Church's answer. Normally, when there is breakdown in the Church the problem is a theological one. At its root, a misunderstand, not just of what the Church is but generally of who God is too, it is normally a Trinitarian problem a loss of the sense of God as Father.

The psychologist would say the same about psychosexual problems.
One of the things that strikes me about the new translation of the Missal is that they are clearer about our relationship with the Eternal Father, I am convinced that a significant part of the problems we see in the Church today, in society too and in the family, rest on a defective understanding of the the Fatherhood of God. Maybe our own spiritual problems rest on that too, the failure to grasp the intensity of the Father's love and passion for us.

With an impotent Father we are going to be useless at evangelising, at promoting vocations, at teaching about the family, at holding together as a Church, at having anything to say to society, at changing people's lives.

A footnote: The new translations are the beginnng of a reorientation of our worship and theology, and a rediscovery of the Fatherhood of God.

Facing East seems to be a better way of directing ourselves and the Church towards the Eternal Father.

Ad populum seems to suggest Jesus's meal with his friends.

Are you hinting at that, Farv?
Bet ya are

There is still a problem with the translation of "spiritu" and "Spiritu" as in "Sancto Spiritu". ICEL did not address this.

These translations strike me as nothing more than yet another bail out for Vatican II. To clergy and theologians of a certain age Vatican II has simply become "too big to fail".

Surely people flocked to the early church for the salvation that comes from partaking of the Body of Christ. They probably did not think about the theology too deeply.

Physiocrat,
I don't think so, what ecidence is there in the NT?


In the Epistles there is only one direct reference to the Eucharist.

Presumably is was something that was just done regularly without too much being said about it.

The Mass presumably took on its present form very early on.

I hope more people flock the church now to learn and appreciate the theology behind it which might not have been the case as what you say before. If we don't internalize what it really means, then we're wasting precious time that could have been used to undertsand and live by the virtues and beliefs of the church.