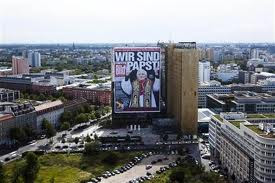 The Pope arrives in his native Germany today, if you want some background Der Spiegel has a delightfully sour series of articles in English.


Part 1: The Pope's Difficult Visit to His HomelandPart 2: From Liberal to ConservativePart 3: 'A Poisoning of the Atmosphere Within the Church'Part 4: Rise of the Neocatechumenate MovementSo transparent is the author's loathing that practically every paragraph seems to give me hope that German Church is at last coming alive after years of decay, the era of Liberalism is over or rapidly aging.
Here is a little taster:


Liberal voices already had a rough time of it under John Paul II, but they have come under even greater pressure from Rome since his death. Mainz Cardinal Karl Lehmann was long the leader of the reformist camp in Germany. As chairman of the German Bishops' Conference, he did not shy away from conflict with Rome when it came to promoting a more modern form of Catholicism in Germany.

Those days are gone. The shift in the balance of power was almost physically palpable at a joint reception of the dioceses of Limburg and Mainz in the garden of the Limburg seminary in late August. The 75-year-old Lehmann, who is perhaps the last great liberal in his church, was on crutches after knee surgery and seemed weak. He responded to a question about reforms in Germany's dioceses with a weary, resigned look. The elderly bishop misses his companions from another era, who have either retired or passed away. "The others," as Lehmann puts it, are now calling the shots in the German episcopate. No more than a third of German bishops are still clearly on his side.
A few meters away from Lehmann, a prominent representative of "the others" was busily working his way through the crowd: Franz-Peter Tebartz-van Elst, a young, energetic bishop who is shifting the once-liberal Limburg diocese decidedly toward Benedict's traditionalist course.

I am sure this visit is not going to be easy, so implore Our Lady's protection for Pope Benedict.

The news article in the Telegraph this morning was slanted too.

'He was condemned in 2009 for lifting the excommunication of Richard Williams, a maverick British Bishop who questioned the holocaust as well as his perceived inaction over priests who sexually abused children'

This sounds pretty typical of the Spiegel. I stopped buying it after the sheer nastiness of its coverage of the Holy Father's visit to WYD in Cologne.

Further evidence that he is getting it right!

Well Father, the Irish Independent managed to cover all the bases in its first article on the Holy Father's visit:

I couldn’t help but think of Our Lord in front of the Sanhedrin and the futile attempts to find cause to condemn Him. As with Our Lord, so with His Vicar…

And now Fr. Rodriguez(see post at WDTPRS)Fr.Pavone,the Priest in Linz(post at Linen on the Hedgerow)More Holy,orthodox priests in "conflict" because of their Traditional Catholic teachings.

The articles from the Telegraph and Irish Independent seem to be a virtual précis of the one appearing in Der Spiegel - evidence, if it were needed, of the way in which the reportage of the MSM is chronically unoriginal and how a particular bias can snowball into an entrenched dogma of the media-magisterium. I do not fear that, even in Germany , the Pope will be put off his course. I choose to remember that it is not the first time in history that it has been fashionable to despise the Vicar of Christ, and after all "if the world hate you, know ye that it hath hated me before you".

It sounds as if liberalism has run its course.