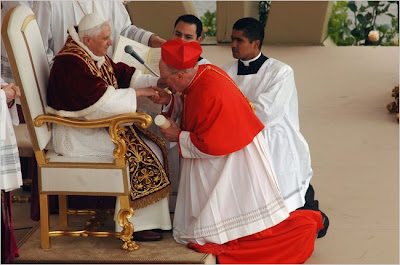 Cardinal Levada is due to retire as Prefect for the Congregation for the Doctrine of the Faith. It can't be easy taking over from a Pope and one isn't quite sure whether particular actions are his or the Pope's.

It now seems that many of the condemnations  issued by Levada's predecessor were done under obedience and at the direction of Pope John Paul. The Benedict XVI and Levada relationship has been gentler. Rather than condemning or imposing censures we have seen the CDF engaging with dissidents, either requesting clarification from them or making clarifications of doctrinal points. It is only occasionally, and normally after a long correspondence as in the case of the Australians Fr Kennedy and Bp Morrison, that recourse to law has been used.

There have been one or to fireworks under Levada's headship both extraordinary acts of the use of the Church's law: Summorum Pontificum and Anglicanorum Coetibus, both being imaginative scalpel-like cuts through endless discussion and both being essentially pastoral, in the interest of souls. Let us pray there will be a third such act before the end of the month.

The situation has changed in the Church, the old Dutch, Swiss and German dissidents have disappeared, almost. New one's have replaced them, more numerous but less of an academic force, no longer giants but dwarves, lots of them, but there is a new confidence in the Church and in orthodoxy. Rather than making martyrs we need to persuade, coax, cajole and above all teach, because the new dissidents arguements are pretty weak, for the most part they are no longer "intellectual" problems but pastoral ones.

Yes, "there is a need to recognize dissent for what it is, and not to mistake it for a mature contribution to a balanced and wide-ranging debate". The Benedictine and Levadian way, the way of the teaching Church, is to challenge error, to ask it to explain itself, to point its folly, but is essentially a pastoral approach and should be a matter solved in parishes and dioceses before ever Rome gets involved.

Just a few thoughts - an invitation to a reception to meet him arrived in the post the other day.

There's a bunch of Austrian comedians who want an end to priestly celibacy, ordination of women and the admission of remarried divorcees to Holy Communion.

To see how destructive adultery is to the Church, read from the beginning of Malachi chapter 2 to the end of the book. Note the reference to Elijah.

Who went gunning for Elijah? Jezebel.

Where do we meet Jezebel in the New Testament? In the book of Revelation, letter to the church at Thyateira.

Lesson: When a man breaks faith with the wife of his youth, he loses communion with God.

When, during the life of his divorced wife, he yokes himself to another woman, she is to him as a daughter of an alien god.

I do hope you are able to accept the invitation, Father.

Hey, what about the Eastern rite comedians who practice clerical marriage?

In 1979, Archbishop, later Cardinal, Tom Winning (for transparency I should point out oor Tam was a much loved family friend as well as my PP during my teens; and it was he who later, when I had had to retire from teaching due to serious ill health, encouraged me to write for the Catholic press in Scotland) was appointed to the CDF.

One week before Christmas in 1979, on December 18, it was announced that Hans Kung had had his missio canonica (the licence required by theologians to teach in Vatican-approved theology faculties)revoked by the CDF.

During the next plenary session of the CDF (first half of 1980) Archbishop Winning condemned the timing of the announcement and demanded to know why Kung had not been allowed to be advised and represented by an Advocate as would routinely happen in all other canonical processes. (It should be remembered that His Emince was himself both a Doctor of Canon Law and an Advocate of the Sacred Roman Rota as well as holding the Licence in Sacred Theology and thus had rights of audience in all the Tribunals of the Roman Curia; indeed, he was the only diocesan priest in the British Isles so qualified.)

In his generally excellent biography of Cardinal Winning, Stephen McGinty writes: "Cardinal Franjo Seper, the head of the CDF, was startled by Winning's complaint and turned to Pericle Felici, the Congregation's canon lawyer, for his opinion. Felici explained that under previous rules an advocate was available but that Seper had altered the process and dispensed with the advocate. Winning believed that it was as a result of his suggestion that when Leonardo Boff, the Brazilian Franciscan who was a pioneer of Liberation Theology, was later called before the CDF, he was offered an advocate to help prepare his case."

For the record, I should point out that this was not a fond belief on the part of His Eminence, he had a friend, a fellow priest of the Diocese of Motherwell, on the staff (mid-level) of the CDF with whom he would doubtless have discussed the matter. Also, my friend Stephen has got this a wee bit wrong but not in the essentials; Cardinal felici WAS an expert on canon law, but he was NOT the CDF's expert: a former President of the Pontifical Council for the Interpretation of Legislative Texts, he was then Prefect of the Apostolic Signatura and as such was a full member of the CDF.

Cardinal Ratzinger became head of the CDF in the following year, November 1981, and is known to personally have had great sympathy with Cardinal Winning's view and held him in great esteem for having had the courage to speak up in the plenary session on the matter.

Thus has Cardinal Levada, Bill to his friends, been free to treat those who come to the official notice of the CDf with far greater respect and courtesy than his predecessor was allowed under the ancien regime.

Presumably, when Pope Benedict allows Cardinal Levada to give up the reins of high and onerous office (but, I would be prepared to bet, while keeping him nicely to hand as Dean of the College of Cardinals) his successor will continue in like vein.

And another prediction: that successor will be His Eminence Peter Kodwo Appiah Turkson.

Is it worth sending in my CV?

Bones,
Why not, but emphasise it is WHITE van and you could be useful doing house clearance of dissident theologians.

Now there is a vocation.

A friend writes:
I'd be rather cautious about that invitation, Father. That kneeling in the picture is a bit retro and the kind of thing which gives our hierarchy hives.
Ahem.