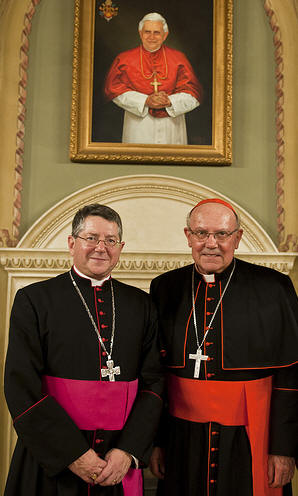 I have just had a delightful evening at Archbishop's House, it was really a fundraiser for the Ordinariate sponsored by the Catholic Herald. The picture above shows Mgr Keith Newton with Cardinal Levada.
I met most of the Monsignori, the former Anglican Bishops, what struck was how warm and outgoing they were, that they were actually affectionate kindly men. There were a few Ordinariate priests there too, again these men impressed me, so many had thrown themselves into a less than secure future for the sake of Christian unity, not too risky for a celibate but for a young man with a new wife or someone with children, well, impressive. The Ordinariate is up and running but it is still evolving, still in the process of solidifying, what it needs is funds. They launched an appeal in July, maybe the summer isn't the best of times to do so but so far they have only raised £50,000.
I was a bit disappointed I didn't get to speak to Cardinal Levada but he spoke impressively about how the Ordinariate was the Holy Fathers personal project, I feel it is worthy of financial support for that reason alone. If you can help by sending them something click here. 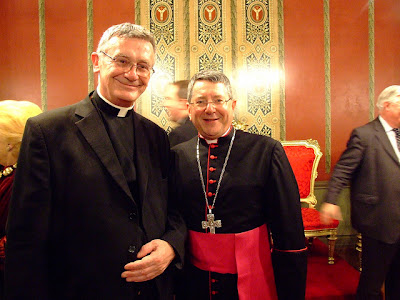 Fr Tim was there and kindly took the picture of Mgr Newton with me, he has a further report and more pictures, and also reminds me of people who where there I didn't to speak to, there are more pictures here too.
Be generous if you can, send something.
at September 29, 2011

I'm going to download them and put them in my prayer room that my grandchildren may remember you in their prayers.

It is good to see our Preists in their clericals.