Through Him to the Father 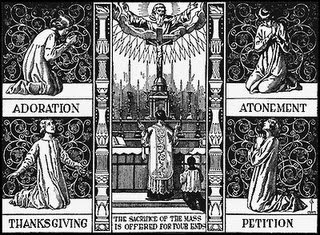 The doctrine of the Holy Trinity is important, actually it is a life and death issue.
I was invited to speak at prayer group meeting a while ago, it was lay lead, it was pious, lots of good people. What struck me was most of the prayer was addressed to Jesus, nothing wrong with that but apart from singing a song which started "Abba, Father", which seemed to have a rather dubious Trinitarian theology, there was hardly any reference to the Father.

It was the Father Jesus came to reveal, he is the perfect icon of the Father. In the liturgy prayer is, for the most part addressed to the Father, through the Son, in the Holy Spirit, the model is the doxology of the Eucharistic Prayer, "Per ipsum, et cum ipso, et in ipso, est tibi Deo Patri omnipotenti, in unitate Spiritus Sancti, omnis honor et gloria per omnia saecula saeculorum." Though the Eucharist is a thanksgiving for Jesus Christ, it is addressed to the Father, Jesus is not the focus of the Mass, or our devotions, or the Church: the Father is. Always we go to the Father, through with and in the Son, in the unity of the Holy Spirit. If our worship merely brings us to the Son without going further into the mystery of the Father then presumably it is foreshortened and towards heresy.

Obviously, it is true, "to see me [Jesus], is to see the Father", hence the Church eventually came to address, occassionally, even liturgical prayer to the Son. It encouraged devotions like prayer to icons, at first to the ambiguous image of the Incarnate Word, the Pantocrator, then later to the crucified Christ, and ultimately to the Sacred Heart. I say "ambiguous image of the Incarnate Word, the Pantocrator", because as Christ is the perfect icon of the Father those great mosaic images in the apses of ancient basillicas can be read as images of the unseen Father.


I think one of the problems with the "ad populum" orientation of the Mass is that it gives too much emphasis to Christ, or better not enough emphasis to the Father, even the so called Benedictine arrangement described by the Pope in Spirit of Liturgy, stikes me as being highly problematic:

The idea that the priest and people should stare at one another during prayer was born only in modern Christianity, and is completely alien to the ancient Church. The priest and people most certainly do not pray one to the other, but to the one Lord. Therefore, they stare in the same direction during prayer: either towards the east as a cosmic symbol of the Lord who comes, or, where this is not possible, towards the image of Christ in the apse, towards a crucifix, or simply towards the heavens, as our Lord Himself did in his priestly prayer the night before His Passion (cf. John 17.1). In the meantime the proposal made by me... is fortunately becoming more and more common: rather than proceeding with further transformations, simply to place the crucifix at the centre of the altar, which both priest and the faithful can face and be led in this way towards the Lord, whom everyone addresses in prayer together.’

"The priest and people most certainly do not pray one to the other, but to the one Lord." is incorrect, if the Lord here, and the context seems to suggest it is, is Christ. Though one can share with the Pope a discomfort about constant liturgical change, gathering in a circle around a crucifix, is obviously a little better than gathering in circle staring at one another but it hardly suggests a truly Trinitarian act of worship.

Ad apsidum or ad orientem worship directs the priest and people through the Cross to the Father; through Christ, in Christ, with Christ we move to the Eternal Father.
The emphaisis of the theology of the Mass as "meal" very easily excludes or diminishes the Trinitarian dimension and becomes merely a devotional act of eating with Jesus. The problem with minimising the sacrificial nature of the Mass isn't simply the neglect of Christ's Passion but rather a minimising of His offering to the Father and the Father's acceptance of it.
at September 08, 2011

I'm not sure I understand your point here. Prayer, according to Teresa of Avila, is an intimate conversation with Christ. Dwelling on any aspect of his life - particularly his Passion - reaps immense spiritual rewards. Without mental prayer, the path to salvation becomes extremely difficult.
How can we ever give too much attention to Christ?

Thought provoking, as ever. I read through this post at first and thought "No, that's not right!" But on reflection...
When I pray at home or wherever, I automatically address "Dear Father", or "Our Father". But I can see that the natural attention to the Eucharist shifts focus at mass from God the Father's sacrifice and gift.
I know I drone on about my neighbours' kids(this is largely because I have none of my own to drone on about), but their 10 year old boy cheerfully tells me that he prefers Jesus becuase he's the young God and not "God the old God". Catholic, but not church-schooled; I'm hoping that explains his unique take on the Trinity.

It has just become possible to search for and gain free access to out-of-copyright journal articles on the Trinity (or any other subject) by visiting the JSTOR advanced search page [1], ticking the "Include only content I can access" box, entering search term(s) (e.g., "Trinity"), and hitting the whoopee button! The background to this is described at [2].

When I was a little boy in 1950s, we would go to the Holy Sacrifice of the Mass; Roman Catholic Sermons were presented to us.

Those sermons would catechize us poor, that we would know our Faith and how to defend it.

When I was a little boy, we also had tomatoes.

Being poor, my Mommy (God rest her soul), would use many methods of cooking in order that our meals would seem more plentiful than they actually were.

Tomatoes, potatoes, some meat and celery mixed together and served with refried beans and homemade tortillas would make me so happy as a child, I could hardly stand it.

It made me happy, just as the Mass did, with its wonderful ingredients; Father, Son, and the Holy Ghost, that nurtured my soul.

Once upon a time, tomatoes were real food.

Tomatoes have undergone a genetic modification. There is left only the concept of a tomato.

What used to be a tomato now carries insecticide, growth hormones, birth control, and God only knows what else.

Its reproductive properties have also been manipulated in this process. Farmers cannot grow these creatures without ‘seeds’ from laboratories, instead of Nature.

Proud Men have taken reproduction away from God’s will, and placed it in their hands.

Satan’s plan is to undermine everything God has created.

He knows he cannot destroy God’s creation, but just like his “Nonserviam” changed him from the beautiful Lucifer to Satan, or the Devil, so he labors to change men and their beliefs.

All of which brings us to your Moderrnists Catholics.

Satan has changed their beliefs to non belief.

They have become as genetically modified tomatoes; outwardly claiming Catholicism, but inwardly carrying poisons of heresy and doubt.

A Priest that has fallen into Modernism would not have detected the problem.

Can we remedy this situation?

In the case of tomatoes, stop buying genetically modified foods. Campaign against these things as this video demonstrates:

In the case of Modernism, reject that also.

The campaign against modernism needs to begin at square one with sermons and catechisms on Proofs of the Existence of God, Scripture, and Tradition of Holy Mother Church.

Priests had no problem catechizing the Satan worshipping Aztecs and the Mexicans with Divine assistance.

Now that Divine Providence has taken you to a problem, you need many of our prayers on your behalf that Divine assistance be also with you, to do the job at hand.

God be with you.

From Tepeyac Hill we will storm Heaven on your behalf.

Spot on, Father. The restoration of a common orientation is a liturgical priority, and while we're at it let's get rid of the memorial acclamations; if the Eucharistic Prayer is directed to the Father, why are we invoking the Son at this point? Also, can we go back to the tradition of referring to the Son as Our Lord? I personally cringe when priest renders Per Christum Dominum nostrum as "we ask this through Jesus THE Lord". It sounds so aggressively protestant.