Le Dome and the Exaltation of the Cross 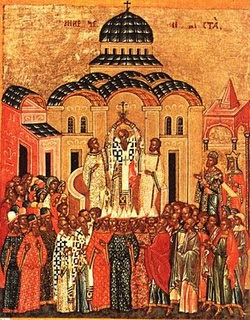 The Feast of the Exhaltation of the Holy Cross is the beginning of monastic Lent. I like the Orthodox practice of tonsuring infants after baptism so they all become monks.


The monastic thing has always haunted me, the silence, the Divine Office , the community, the poverty, the stability. I tried it for a short while with the support of my then Bishop and the kindness of a certain Abbot but the lure of the world, I am worldly, the lure of the world....

I couldn’t stop thinking of how nice coffee in Paris would be, and the thought of never, ever, going to the Opera, ever again, not that I go that often and the prospect of always, 365 days a week, having the same brand of packet soup for lunch, proved too much. But it was the thought of never ever sitting in a cafe on the Left Bank which became quite obsessive, it has not bothered me since leaving the cloister and I haven’t actually been to Paris since leaving. 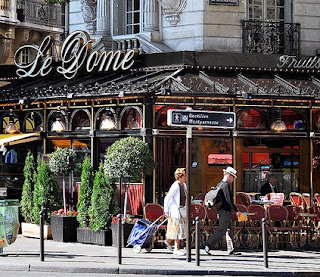 There is a rebellious spirit that I suspect we all have, the preference to do, not God’s will but our own. St Benedict reminds us, “what we have lost by disobedience let us regain by obedience”. The Cross is the great sign of obedience, of “preferring nothing to the will of God”. The heaviest Cross is often the tiniest, we can be heroic when being sawn in half but little things, that is where the weight lies.

I am struck by the triviality of the sin of our first parents, it is a childish act of scrumping, of disobedience. ”Sin entered the world through one man...”. How small a sin it was, it could have been a cup of coffee a Le Dome or wanting a different first course but the effects spread, what we once craved can become infinitely distasteful. Adam’s sin makes him hide his body from Eve and it makes it impossible for him to face God and impossible to remain in the Garden. It very quickly leads on to Abel’s death, it is a discarded apple seed spat into a still pool, into the face of God, the ripples spread.

The only answer, the only way stop the ripples of sin in the world is the Cross and if we haven’t the courage to stretch out our own hands to embrace the Cross, then at least we can cling to the feet of the Crucified and cry Kyrie Eleeison.

Father, how does one deal with the fact of not being attracted at all to religious life? Sometimes I feel I am in deep trouble if I DON'T want to live the Counsels perfectly. I feel like deep down a Christian is always supposed to secretly desire to renounce everything in the world. But I don't want that. I don't even want to want that. I want to be married, I like music, I like secular books, I like learning about far off places and history. If I ever go into religious life, it could only be out of fear, at least at this point.

I read in St. Therese's autobiography last night a line she repeated from "The Imitation of Christ" - she said "Sweet Jesus, make me find bitter all the consolations of the world and all the friendships of the world". I cannot imagine how to begin to even want to pray such a prayer (and certainly, for some people, it's not the right prayer - imagine if married people found only bitterness in the marriage bed).

I don't even know where I'm going with this, but please pray for me.

Fortunately we don't have to save ourselves, we can't. We just have to learn to depend on Him.

If you fear the Cross then hold onto his feet with as much love as you can and try to accept what he sends,

I don't fear what He sends me, I just fear nailing myself to it.

Are all of us "in the world" so to speak failures of some sort? It sometimes seems the only real Christians are monastics.

Were we really not all made for that life, or is it just that we are too weak and sinful?

No, drinking coffee in Paris is not bad, nor is being married, nor is being a secular priest, nor was being a member of the Sanhedrin or a centurion, or a carpenter or anything.
Each is called to do God's will, some are called to be Apostles or Prophets, but not all!

You run a great blog, by the way.

If I'm ever in Brighton, I'll have to stop by for Mass, but Baton Rouge is a long way off.

And what's with English traddies being so sane and level-headed and all that? :)

I wonder what my equivalent of coffee in Paris would be?

Rev. Fr. after reading your posts and the following comments, i thought you all would enjoy this video on Monastic Religious commitment.. ( i did my best with English translation, always a challenge to get the intended sense.)
http://www.youtube.com/watch?v=E2-7t4yxAiQ
in union of prayer EJGcatholic, PAX