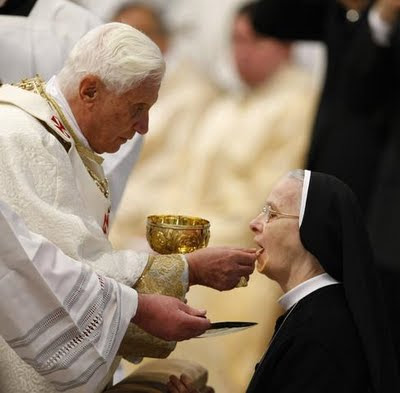 My good friend, may he blog forever, Fr Z has a good letter from Bishop Dorran of Rockford on the reception of Holy Communion in which he seems to be advocating kneeling. In fact he is not being prescriptive, though he is advocating following the example of the Holy Father. "His practice is to distribute Holy Communion on the tongue of recipients who kneel as they receive communion. That should say something to all of us."
Here, following the recommendation of the Bishops during the Swine 'flu, H1N1, threat, we stopped distributing Holy Communion under both kinds. I have been slow to re-introduce it, for various reasons, in part because less than half the congregation received under both kinds, most ignored the chalice. We also had vagrants - presumably non-Catholics - coming in and draining the chalice at least once or twice a week, we also have quite a few alcoholics in the congregation. It is one of the consequences of our outreach work, through our souprun to homeless. Because  so many of our congregation are not from the English speaking world they are not conditioned to receive under both kinds and they haven't been catechised - trying to do so becomes a continuous process that simply becomes tedious. Another reason, is that three or four people, only, who have asked for the restoration of the chalice, have always couched it in term of "having the wine". Yet another reason was the aging of our extraordinary ministers, I found it almost impossible to get anyone under 40, with "a marked devotion to the Eucharist", who was willing to do it.
I feared very much for one woman's safety when quite correctly she refused communion from the chalice to a man who obviously much the worse for drink who had gone to her directly, without receiving the Host and demanded she, "Give us a ....... drink".
What we do here, in order to save time, and to give people time to recollect themselves, and for the elderly to steady themselves, is to give Holy Communion along the sanctuary step. Our Church isn't big so even at Christmas or Easter the distribution of Holy Communion takes no longer than five minutes, if the priest does the moving it is more reverent and takes half the time. The Communion queue takes so much time because people have to move, communicate reverently and move off. Although they are unsupported by a rail or anything about a quarter of the congregation at most Masses tend to kneel to receive or say they would like to if they were able. The few families we have seem to take pleasure in receiving communion alongside one another. What I have noticed too is that amongst young people especially there is a steady increase in those who kneel and receive on the tongue. Quite a few of our people have asked for the return of communion rails but there is an ideological opposition to them by those who have the power to allow them, or otherwise: "over my dead body", I've been told.
I know that what we are doing is not quite the norm in England and Wales but then I think it is a reasonable adaptation for our circumstances.
at September 30, 2011

"over my dead body"

In the end, that is exactly how it will happen...

Given a little time, communion rails will come back, so look after those beautiful brass ones in the basement.

"I found it almost impossible to get anyone under 40, with 'a marked devotion to the Eucharist', who was willing to do it [be an Extraordinary Minister]"

Father, presumably they are not unwilling to help the Church, but their "marked devotion to the Eucharist" means that they do not think they, as lay people, should be handling it.

What are your thoughts on intinction for daily Mass? Some years back a parish I belonged to did that for the weekday Masses and it worked out quite well.

One priest we know has put a prieu dieu on the altar step for the left hand queue, and it is used by about 50% of his queue. There is also a deacon. Both priest and deacon give host to standers. People get to choose. No chalice. This is for Solemn OF. For EF he puts the front row kneelers forward. He may use the chalice for the family Mass - I'm not sure.
Queue

Richard,
Partly, also a diffulty in being on a rota for a particular Mass.

"Marked devotion" the EW bishops' words. I have always taken to mean coming to Mass (or Eucharistic Devotions) in addition to Sunday Mass, or at least spending time in prayer before or after Sunday Mass.

I am going to be absolutely honest here.

As a well known TV advertisment says - Just Do IT! Put the altar rails back as a fait accompli. I know that I could be accused of nievity here but, you obviously want the altar rail to return. It sounds as if there are some in the basement. It sounds like the perfect time to me.

I understand if you wish to pray about this re-instatement (for it to go as smoothly as possible) but at the end of the day you're the boss (so to speak).

I know I've said it before but, Fr. Dominic O'Connor of St. Mary's Brigg brought back the altar rail recently. There were complaints for a couple of weeks and the kerfuffle was all over. It was done as a fait accompli.

He lost a couple of parishioners but he also gained some. There are also people who turn up to visit because of these changes (church hoppers who like things a bit more traditional - 'guilty as charged').

Of course, if your trouble causers are your superiors then that's one thing but, if they are awkward parishioners then I am sure that the storm can be ridden out.

If you decide in favour of the re-instalment then I will pray for you, as I am sure your other readers will.

Thanks for the information, Father. EMHCs ought not to be used as a matter of course; priests ought to give out communion where possible. In my experience, in Ireland, many EMHC do not show sufficient reverence for the Blessed Sacrament but act as if they do not understand what they are doing, its great magnitude and mystery. (Unfortunately, many priests, especially from 50s to 80s in age, behave in a casual, irreverent manner too, with no respect for the rubrics.) Often they act in a casual manner, smiling at people and addressing them by their names. I hope the practice of using EMHCs, except in extraordinary circumstances, will be stopped. Also, where there are no rails, kneelers should be made available as it is very difficult for the old, infirm, or heavy, to kneel without these aids, and so show due reverence. Priests ought to preach regularly about the proper reception of the Blessed Sacrament - at least once a year. Lynda

"there is an ideological opposition"

Father I suggest you ignore that (nicely, of course).

If its the PC remember they are purely advisory. You are in charge. And restore the altar rails.

The quicker we get back to what the Church in her wisdom had established over centuries ie reception kneeling, by mouth, at the altar rails in one form, so that all these problems you mentioned can be avoided,the better

Here in the Latin world (I write from France but the practice is the same in Spain, Italy, Belgium & Portugal)) we NEVER have the communion under both kind (except of course on Holy Thursday). We have never done this, and it doesn't happen to the mind of the people to ask for it.

I'm used to standing now, but I do miss kneeling to receive Communion. I prefer to receive the sacrament in the hand purely because I have never felt comfortable sticking my tongue out at the celebrant: personally a matter of modesty. If that sounds wishy-washy, I apologise, but the most important thing for me is receiving the sacrament; I look forward to it. I am less wishy-washy in my belief that the majority of those who regularly receive Communion will do so as directed by their priest.

Putting the Altar Rails back as a fait accompli and defying the ruling of the hierarchy would be gross disobedience,this is something that we are trying to educate our children not to do.

The remains of our Altar Rails are buried under asbestos contaminated wrappings and disturbing that lot again would bring instant bankruptcy.

Kneeling is no problem for the agile & fit and sticking ones tongue out to hundreds of Priests over the years has never raised an objection.

''Quite a few of our people have asked for the return of communion rails but there is an ideological opposition to them by those who have the power to allow them, or otherwise: "over my dead body", I've been told.''
Quite amazing! i don't understand at all, who are these powerful ones, and whence their power? are not You, the priest, the one responsible to see that there is not risk of sacrilege when distributing Holy Communion? And expereince shows that placing Holy Communion uppon the hand whilst standing - instead of kneeling at the Communion Rails with benefit of cloth and or paten, is always an occasion for danger and sacrilege towards the Sacred Host. In my thirty four years as priest i have never distributed upon the hand. Noone should thwart the legitimate and pious wish of priest and people to reintroduce the Communion Rails. But alas, your expereince proves once again, that it is easier to destroy, than to rebuild.

As far as I can tell, the altar rails could be installed as a fait accompli and would not be defying the ruling of the hierarchy because communion rails are not mentioned pro or con in the liturgical documents. What would be defiance is forcing communicants to use them.

PP's are a not law unto themselves.

PP's are a not law unto themselves.

Amen to that. Naturally, if the bishop says no, then dutifully obey. No one is more averse than I to the "monkeys in the sanctuary" approach to liturgy. But I don't think it applies to rails because unlike novelities added to the liturgy that shouldn't be there in the first place, it was never mandated rails be removed and thus, little different than putting the ottoman back under the chair as opposed to propping up a fish tank or, in my case, used as a "naughty seat" for the children when they hold hands during the Our Father. Ok, just kidding on that last bit. :)

Three weeks ago, our new PP decreed in his homily that the parish would be "going against the rules" if we continued to kneel to receive Holy Communion & as Mass ended our kneeler was swiftly banished !! Through the Congregation for Divine Worship "Recognito" - people have a right to choose to kneel for Holy Communion. Doesn't this action contravene accessibility provision which could possibly result in Health & Safety issues ???