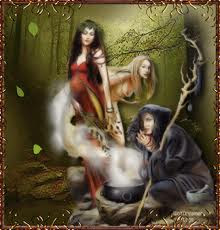 I met a wiccan witch recently -it is Brighton- she was with a lady who no longer comes here to Mass. This lady disagreed with me about who was "Catholic", she would say the witch was, though not in "full communion". The lady stopped coming here when I refused to sell the Tablet at the back of the Church.

Her problem all hangs around a broad interpretation of Lumen Gentium 8, popular in the 1970s and especially  fed by a simplification of Rhanner's doctrine of the "anonymous Christian"

Speaking of the Church of Jesus Christ, Lumen Gentium 8 says, "this Church, constituted and organized as a society in this present, world, subsists in (subsistit in) the Catholic Church, governed by the Successor of Peter and by the Bishops in communion with him, although (licet) many elements of sanctification and truth can be found outside her structure; such elements, as gifts properly belonging to the Church of Christ, impel towards Catholic unity".

This lady would say that wiccan witches (they are not Satanists but into potions and "spells") do good, pray for peace, are "green", are into world peace, and therefore have elements, as gifts properly belonging to the Church of Christ. Since the 1970 the Church has been rowing back on these "elements of sanctification and truth".

For example the Congregation for the Doctrine of the Faith in a Notification on the book "Church: Charism and Power" by Fr. Leonardo Boff said, " . . . the Council chose the word subsistit precisely in order to make it clear that there exists a single 'subsistence' of the true Church, while outside her visible structure only elementa ecclesiae exist, which — as elements of the Church — tend and lead toward the Catholic Church".

As Prefect of the Congregation Joseph Ratzinger issued, in 2000, Dominus Jesus, in which he drew a distinction between the Church that is the Catholic Church and Churches such as the Orthodox Church which have a undisputedly validly ordained epicopacy and Ecclessial Communities such as Anglicanism, which do not have validly ordained bishops or priest or even the Salvation Army which has no sacraments at all but do have the scriptures, though little of the Tradition to interpret them correctly.

Pre-Dominus Jesus ecumenism seemed to want to broaden the scope of what a Christian was, seeing elements of Christianity everywhere, in Islam, Hinduism, Buddhism, even tribal religions or witchcraft, that seemed to be at the root of previous Assisi events. After Dominus Jesus elementa ecclesiae tend to be seen in more precise terms, that can be seen in terms of "the hermeneutic of continuity",
at October 26, 2011

When the first Assisi meeting took place, I asked the question, will practitioners of witchcraft be invited to the next meeting.

Cardinal Ratzinger put the letter into the Vatican Archives and gave me an archive number to use for future correspondence.

Mikesview
Father, I don't wish to sound Gnostic here but surely to start unravelling things like Council documents (regardless of one's views on V2 as such) doesn't one need specialist experience and knowledge, of the kind one is only likely to get as an academic or in the ordained or professed state?
Isn't the average lay Catholic at risk of becoming like the Protestant, who interprets his Bible for himself?
As for the Tablet business, isn't that rather like refusing to buy from a particular (and very good) fish and chip shop because they won't put out balsamic vinegar!
(Last question) As an ordinary lay person, isn't one much better off concentrating on the Mass, the Sacraments, the Rosary plus the Catechism and some spiritual reading? In other words, Keep Your Eye On The Ball!

Excellent post, father! It seems that some think we can all hold hands and sing "Kumbaya" and it'll all be ok. such a view ignores the facts that the sacraments are necessary to receive grace.

I'm sure your Brighton wiccans are ever so nice but of course they're only pretend witches. A bit like an alternative variant of Affirming Catholicism. Where people really, passionately believe in witchcraft you're quite likely to get a trade in children's body parts.

The lady stopped coming here when I refused to sell the Tablet at the back of the Church.

Well, if that doesn't tell you all you need to know about the Tablet, I don't know what.

I'm quite happy to admit that there are 'elements of sanctification and truth' in Wicca so long as we're also clear that 1) they only achieve their completeness in the visible body of Christ that is the Catholic Church and 2) they are mixed in with a lot of other, harmful elements.

I guess now they are.

Here is one invited by the Holy Father to provide entertainment at Assisi:

Obviously anyone who worships the occult or believes they're "praying" to or exulting any perceived entity or power other than God is irrefutably breaking the first commandment. Clearly, they couldn't be seen as Catholic.
I was always of the impression that the word "witch" derived from "wicca"; in turn, originally meaning wisdom or sense. Therefore, I assume that witch-craft was originally seen to be a craft or ability: an additional sense. I realise that satanism and "black magic" will always hi-jack vulnerabilities, fears and superstitions. I don't believe wicca is a religion in itself.
There have always been savants and prophets; there will always be those who have psychic ability or spiritual sensitivity. I believe all true abilities are gifts from God. Many people have gifts which seem fantastic and impossible to others: put very tritely, an ear for music, the grace of a dancer, green fingers, a knack for languages. As such, I don't believe there are good or bad abilities, but I know that they can be used to pervert and corrupt.
My maternal grandmother might not have known the origin of wicca, but would have been devastated if anyone called her a witch. In her day, she would have been known as "God fearing". My Dad, who was passionate about his Catholic faith, nursed his mother-in-law through her final long illness and described her as "close to God". I'm aware that people travelled from neighbouring villages in Ireland to see her; when doctors couldn't be paid for, to advise on pregnancies, for marital guidance. In short, she apparently "knew" things.
I've always felt that obsession with the darkness of the occult, such as ouija boards and seances, can be as malignant as any disease; although the dead cannot hurt you, as the living can. But evil and the devil certainly exist. The recent reportage of self-proclaimed "witch-doctors" selling children's bodyparts to those seeking prosperity has been chilling and heartbreaking. These guys are as far from being religious practitioners as they are from the medical profession. Simply, they're murderers.