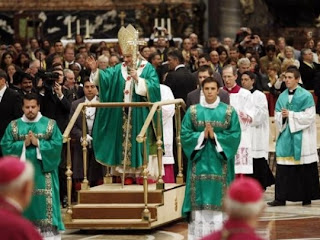 The Pope used a moving platform this morning at Mass. In the past he would have been carried on the portable throne, which would be so un-p.c. nowadays. The platform seems to have all the advantages of the sedia gestatoria but without the baggage, in that it makes the Pope more visible and also has security advantages. At 85 people tend to get a little tired, in Germany he seemed quite spry. 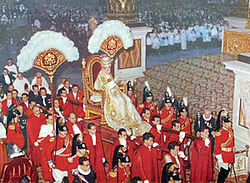 This morning at a Mass for the Council of New Evangelisation he announced the months before the 50th Anniversary of VII would be a "Year of Faith".
at October 16, 2011

How can someone look back at the last fifty years in the Church and not see the murdered souls, vocations, Faith, demolished altars, closed Monasteries, Seminaries, Convents and much more, as a result of the aftermath of Vatican Council II?

How can they see the smoke of Satan and not cry out "Fire"?

Didn't they use the same device for Pope John Paul II when he became too frail to walk?

I was at Westminster Abbey when the Pope came there last year. I remember thinking then that it would be good to bring back the sedia gestatoria, as Pope Benedict so small that it was very difficult to see him process in and out!

Saint Michael: I take it that you are a sedevacantist if you believe that the Holy See can/has become the seat of the anti-Christ. Remember that Christ’s own words ensure that such an event is quite impossible.

As for the new mode of papal transport: excellent.

A sensible way of coping with physical infirmity. It allows the Pope to concentrate on his considerable mental faculties. The colours are a bit eye-watering, though.

Yes, georgem, ghastly colours. Moving on, though, isn't there an illogicality here? If as Fr. says, 'at 85 you get a little tired', is it not better to sit, as Pope Pius XII (I think it is he) is shown on the sedia gestatoria, rather than stand, and on that awful bumped up zimmer frame? Oh, but I s'pose the sedia would be far too de trop for Newchurch. A case of novelty triumphing over tradition.

Go to Youtube, search for "Ausschnitt aus dem Film: "Der veruntreute Himmel" mit Papst Pius XII" and watch it! That is real humility and noble simplicity. I think that using the sedia gestatoria is more befitting for the vicar of Christ than using this modern cart.

Apparently, any return to the sedia gestatoria is out of the question for reasons of security alone.

Crux Fidelis
I'm sure you're right about the 'security' thing, but - sorry - I don't see how there is less security on the sedia than on the zimmer frame. There seems to be about the same risk in either case.

Place a throne on the "Movable Platform" and it will resemble a Sedia. This will allow the Pope to sit, link the platform to its' past, the Sedia and put both camps to rest. A more contemporary form of the Sedia while retaining its' essence.