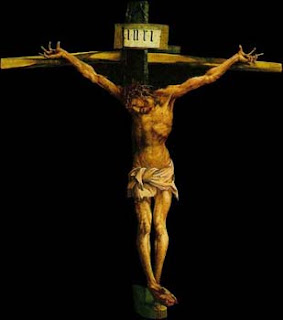 Fr Sean Coyle sent this account of Mass in Belsen after its liberation in response to a previous post on a speech by Cardinal Piacenza, the full article can be found here.
Thank you Father.

The most moving experience came on the second morning as I was walking from what had been the luxury SS barracks which our troops had transformed into a hospital. My attention was drawn to two packing cases covered by a worn red curtain. A young Polish priest was clinging to this makeshift altar with one hand, while celebrating Mass. Between his feet lay the body of another priest who probably died during the night. No one had had the energy to move the body.I had no difficulty in following the old Latin Mass, having been educated at St James's Roman Catholic School in County Antrim, and, although an Anglican, I had gained a working knowledge of all the rituals. Still supporting himself against the altar, the young priest did his best to distribute the consecrated elements. Some recipients were able to stumble over the rough, scrubby heathland. Others crawled forward to receive the tokens and then crawled back to share them with others unable to move. Some almost certainly passed on to another - probably better - world before sunset. Whatever one's race or religion one can only be uplifted and impressed by that truly remarkable proof of the ultimate triumph of good over evil.

The Glory of the Priesthood said...

After the months and years of public negative reporting about Catholic priests may I suggest that these stories be gathered into a small book (it need not be a great tome to be effective) to present the other side of the coin - the glory of the priesthood. It could be published in quite a simple format and, for a start, given out in our schools [and then sent to the BBC and other suitable and deserving recipients]. I know it is always easy to come up with an idea then expect other people to do the work but perhaps one of our Catholic publishing houses could be encouraged to do this?

By the way, my father-in-law was among the troops that liberated Belson but he would not talk about it.

What a good idea, it could be done as a blog.

Thank you, Father Ray, for your post. I read Lord Molyneaux's article from time to time and am always moved. I was astonished to learn that he had studied at a Catholic school in Northern Ireland, despite being an Anglican. A priest who was working in Belfast during the worst of 'The Troubles' told me that on one occasion he wrote to the leaders of the four main political parties. The only one who responded was James Molyneaux, then leader of the Ulster Unionist Party, and his reply was a very personal one, expressing his anguish at the situation.

PS You can read about Fr Michael Morrison SJ, an Irish priest serving as a chaplain in the British Army, who was part of the group that liberated Belsen. The BBC account of his life ends with these words:

'Until his death Morrison spoke very little of what he witnessed. In the years that followed the war the world began to fully realize what had happened in the concentration camps. However the many students that Morrison taught [in Belvedere College, Dublin] had no idea what he had witnessed as a chaplain. He showed extraordinary courage in his duties and paid for it with his health. Fr. Michael Morrison SJ went into Belsen a fit and energetic man but came out of it somewhat broken and suffering gradually failing health. http://www.bbc.co.uk/ww2peopleswar/stories/37/a3953937.shtml

I have a nonagenarian neighbour who was a survivor of Auschwitz,she cannot be persuaded to talk about the experience even though she has had phone calls from Stephen Spielberg.

She certainly has all her marbles and is totally independent and never even wants people to go to the shops for her.

Nickbris,
There used to be quite a few survivors amongst the Polish and Slavic communities - talking about it for all meant reliving it - so most considered it best not to.

Now somewhere I saw a clip of the first Mass celebrated at Belsen (I think) after the liberation, but I can't remember where. On your blog, Father? Perhaps if so you could link to it. It was incredibly moving.

'The Glory of the Priesthood' has an excellent idea to gather up these deeply moving accounts and Fr Ray's idea to put them on a blog would reach out to people.

However much time has passed and there are fewer and fewer people left who witnessed such atrocities. My step father was a young soldier also with the troops who were first into Belsen. My mother told me that he would never talk about his experiences either but she hinted that it still affected him even after all these years. Ever since then until his death he had to sleep with the light on...

Even the children of those who witnessed the liberation of the camps are getting on now.

A couple of years ago I had a long conversation with a lady in her eighties whose father had been a prisoner in Dachau. Although not a Priest, his deep Faith saw him through the horrors and his cause for Beatification has been put forward due to his selfless support for others in the camp. He looked after those with typhoid although catching the disease himself. If he is eventually beatified there will be much rejoicing in one particular French diocese as one of his grandsons is a Bishop there but memories of the camps will once again resurface for many.

Many of us know the story of Saint Maximilien Kolbe. In a way he represents all the many unknown Priests, including the Polish Priest mentioned by Fr Coyle, who lived and died in the camps. Their devotion to God and to their fellow prisoners should be an example to us all.

Fr Ray, you say that "talking about it meant re-living it". This is the essence of traumatic memories. An ordinary memory sits in the "top" of the memory for a few days and gradually gets percolated into long-term storage in different bits of the brain. At the same time, our perception of the memory changes. When that memory is recalled, we KNOW that it is a memory. A traumatic memory, for reasons not fully understood, does not follow this process. It stays, for reasons unknown, right up there, hidden, but ready to be brought into the centre stage at the slightest trigger. When that happens, the brain and body react exactly as they would were the events happening right there and then. And this can happen day in, day out, for decades. It's truly awful.

My father was also one who liberated Belsen, and like others, would not speak of it. He told us once that he had written his account down, so that we could read it after his death. Unfortunately (or perhaps fortunately) when he died, we found nothing of that nature in his papers. To this day we're not sure if he told us that to ensure we never spoke directly to him about it, or if it is still sitting in an envelope, somewhere hidden.