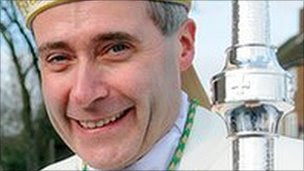 I was sent Bishop Mark Davies' homily at Birmingham Oratory by Shrewsbury's Diocesan press officer, here is an extract in larger type, I can't find it online yet so I have put it all up.


The tombs of the Saints and the Blessed ones have throughout England’s history spoken a word of encouragement and hope to successive generations. Like those “witnesses in a great cloud on every side of us,” (Heb. 12: 1) of which the Letter to the Hebrews speaks, the shrines and relics of the saints in every corner of this land have urged us towards that victory which faith assures. We think of the body of St Cuthbert carried from Lindisfarne to its resting place in Durham amid the fury of the Norseman or the shrine of St Edward the Confessor standing at Westminster for almost a thousand years amid the changing scenes of our history. And we cannot forget those first missionaries to the English people urged by Pope St Gregory to bring relics to this land to awaken the hope of holiness and witness to the communion of saints. Amid a “new evangelization” fourteen centuries later few could have imagined the spirit of prayer and repentance the relics of St Therese of Lisieux would awaken in Birmingham, Manchester and London.


But what of the reliquary of Blessed John Henry Newman which we are to establish at the Birmingham Oratory today? As we gather little more than year after Pope Benedict came to these shores to declare him amongst the Blessed. The Holy Father would describe this as, “the crowning point”, of his visit to the United Kingdom. For Pope Benedict wished, he told us, to “present anew the luminous figure of Cardinal Newman, an intellectual and a believer …” (General Audience 22nd September 2010). We are not all called to be intellectuals but we are all certainly called to be believers beside Blessed John Henry. And we need to ask today: what will his shrine in Birmingham and his relics venerated in this Oratory Church speak of to this generation and to generations yet to come?


Pope Benedict has frequently pointed us towards the enduring testimony of John Henry Newman. Last month, welcoming the new British Ambassador to the Holy See he spoke of, “the remarkable prophetic clarity”, with which Cardinal Newman had identified the challenges which British and Western societies face today. Yes, Blessed John Henry had diagnosed in its first symptoms we might say, the disease that now ails our own time. As Pope Benedict had declared in London’s Hyde Park, “At the end of his life, Newman would describe his life’s work as a struggle against the growing tendency to view religion as a purely private and subjective matter, a question of personal opinion. Here, is the first lesson we can learn from his life,” the Holy Father said, “when in our day, an intellectual and moral relativism threatens to sap the very foundations of our society …”

Cardinal Newman had spoken himself of this being the enduring message of his life and labours when becoming a Cardinal in 1879 he declared: “for thirty, forty, fifty years I have resisted to the best of my powers the spirit of liberalism in religion. Never did Holy Church need champions against it more sorely than now, when, alas! it is an effort overspreading as a snare, the whole earth …” As he had written in his “Apologia,” “my battle was with liberalism …” as an Anglican and from 1845 as a Catholic. He wished to contest what has rapidly become the dominant view of our own time as he put it in the “Essay on the Development of Christian Doctrine,” “that truth and falsehood in religion are but a matter of opinion; that one doctrine is as good as another… that the Governor of the world does not intend that we should gain the truth; that there is no truth.” So we can reach the point when a Government proposes that marriage, the very foundation of the family, crucial to the well-being of society can be redefined to mean whatever we wish it to mean. Newman foresaw the path which would lead to this confusion as Revealed Religion becomes regarded, he said, as but a sentiment, a taste, so that each individual makes it say just what he wishes it to say. He surely wanted us to see now that, “there never was a device of the Enemy, so cleverly framed, and with such a promise of success” (Biglietto Speech 1879). And how we see the success of that “liberalism” or “relativism,” as an ideology which appears enticingly generous and broadly tolerant in demanding one belief should be considered as true as another. Yet becomes as the Holy Father described in Glasgow: “a dictatorship of relativism, threatening to obscure the unchanging truth about man’s nature, his destiny and his ultimate good.”(Bellahouston Park, 16th Sept. 2010).
Scholars will long ponder the prophetic writings of Cardinal Newman but he would surely wish his memory and shrine to declare in a way both kindly and insistent that the truth can, indeed, be truly known. For his basic spiritual message, Pope Benedict explained, “testifies that the path to knowledge is not withdrawal into “self,” but openness, conversion and obedience to the One who is the Way, the Truth and the Life (General Audience 22nd Sept. 2010) Our Lord Jesus Christ. The relics of Blessed John Henry Newman’s shrine will silently allow his heart to continue to speak such encouragement to so many hearts: assuring us of victory in this struggle which we are now engaged in. Let us listen to the voice of an aged John Henry Newman saying to us, “it must not be supposed for a moment that I am afraid …,” he said, “I lament it deeply, because I foresee that it may be the ruin of many souls; but I have no fear at all that it really can do aught of serious harm to the Word of God, to our Almighty King, the Lion of the tribe of Judah, Faithful and True, or to his Vicar on earth” (Biglietto Speech 1879). Newman knew where our trust must be placed in the Word of God, our Almighty King and his Vicar on earth. He envisaged even the possibility of centuries of confusion to come but would say, “this present ordeal, though different from any of the preceding, will be overcome”. In the conclusion he had drawn repeatedly from the Scriptures and the history of the Church we have only to stand firm, he would say, and we will, “see the salvation of God”.
So as the relics of St Cuthbert or the Confessor and a thousand shrines to our saints have spoken a timeless message of hope and encouragement to so many before us. May the shrine of Blessed John Henry Newman speak to our hearts and continue to speak to the hearts of those who come after us. May he bring to our times the voice of his “prophetic clarity”, of which Pope Benedict speaks. And by the heroism of his own life offer the assurance that by standing firm in faith and by our very faithfulness we will see with him, “the salvation of God.” Amen.


Bishop Davies is the keynote speaker at the first Colloquium of the Confraternity of Catholic Clergy, Thursday 27th to 4pm Friday 28th October 2011, Reading Oratory School.

You would do us all a favour if you could make the whole thing available. Bishop Mark's sermons do not appear anywhere as far as I can see. Humility on his part?

Bishop Mark Davies a breath of fresh air, I hope the Bishops' Conference will not stifle the same!

Bishop Mark is a sound man. Any Bishop who is willing to spend four days slumming it in a tent in a field with no showers to help the faith of young Catholics is worth his weight in gold. He does sound like a TV presenter though.

archbishop of liverpool in the waiting - a lot of the younger liverpool clergy are hoping and praying novenas it will be the case!

Let us pray earnestly for more prelates of this ilk.

I am delighted to read that Bishop Davies will be the keynote speaker at the Colloquium of Catholic Clergy. You could hardly find a better.
Congratulations and God bless.

Dear Father, a technical note, since a large part of this post appears in small print. A computer geek friend taught me this trick: when you copy text from another source, before pasting it into your blog, paste it first into Notepad (or whatever is your basic txt. word processor), and then copy it from there. Notepad removes things like bold and italics, but it also strips out all the hidden formatting anomalies that make pasted text look odd in the blog. I swear by this technique, so I wanted to pass it on. A.