A Dix Fix: on the Mass 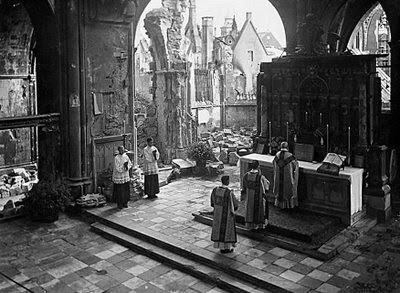 I am praying desperately for the kindly blooger who used to give me a regular Gregory Dix fix. I thought you might enjoy this which was sent in by reader, it is of course from Dix's Shape of the Liturgy. 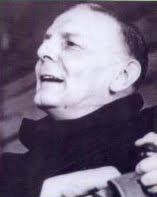 Was ever a command so obeyed? For century after century, spreading slowly to every continent and country and among every race on earth, this action has been done, in every conceivable circumstance, for every conceivable human need from infancy and before it to extreme old age and after it, from the pinnacles of human greatness to the refuge of fugitives in the caves and dens of the earth. Men have found no better thing than this to do for kings at their crowning and for criminals going to the scaffold; for armies in triumph or for a bride and bridegroom in a little country church; for the proclamation of a dogma or for a good crop of wheat; for the wisdom of the Parliament of a mighty nation or for a sick old woman afraid to die; for a schoolboy sitting an examination or for Columbus setting out to discover America; for the famine of whole provinces or for the soul of a dead lover; in thankfulness because my father did not die of pneumonia; for a village headman much tempted to return to fetich because the yams had failed; because the Turk was at the gates of Vienna; for the repentance of Margaret; for the settlement of a strike; for a son for a barren woman; for Captain so-and-so, wounded and prisoner-of-war; while the lions roared in the nearby amphitheatre; on the beach at Dunkirk; while the hiss of scythes in the thick June grass came faintly through the windows of the church; tremulously, by an old monk on the fiftieth anniversary of his vows; furtively, by an exiled bishop who had hewn timber all day in a prison camp near Murmansk; gorgeously, for the canonisation of S. Joan of Arc — one could fill many pages with the reasons why men have done this, and not tell a hundredth part of them. And best of all, week by week and month by month, on a hundred thousand successive Sundays, faithfully, unfailingly, across all the parishes of christendom, the pastors have done this just to make the plebs sancta Dei — the holy common people of God.

Where does this very powerful picture come from?

I think it is Cologne.
I have put it up before.

Cardinal Piacenz's episcopal motto is "Una quies in veritate". My Latin is seriously deficient, so could you kindly translate Fr?

I would hazard that it is something to do with "in search of the truth", but it would be nice to know for sure.

"Una quies in veritate".
I hate translating mottoes but ...
"One reposes in truth".

"I really don't see why you should be surprised at the conduct of your fathers-in-God. After all the sign of a Bishop is a crook and of an Archbishop a double-cross." In explaining his oft repeated description of the bishops as Edwardian, he commented "Strictly Edward VI in theology; strictly Edward VII in mental equipment and strictly Edward VIII in their views on marriage".

I do love that piece of writing. I had forgotten it until I was leafing through a duplicate copy of Dix earmarked for disposal a few days ago and my eye lit upon it with some joy.

I'd like to be a fly on the wall when Professor Dawkins or Dr Jonathan Miller were in extremis.

The picture, I think, comes from Muenster, Westfalen, Germany, St Pauls's Cathedral there, after the air raids at the end of the war. Is it von Galen celebrating?

Thank you for posting that picture of St. Paul's Cathedral in Münster, Germany. The photograph dates from 1946 and shows the main altar of the church destroyed by allied bombing. Most of our town was annihilated.
The Lion of Münster, Cardinal von Galen comes to mind who recieved the red hat that very year, shortly before his death.
It also reminds me of the lamentable state of the Church today. A lot of damage has to be undone!