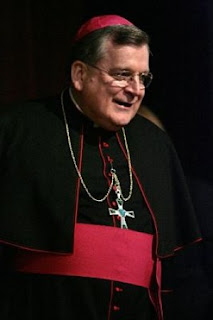 I have been looking for the transcript of Cardinal Raymond Burke's speech at Manchester University on 12th October online. I can't find it anywhere.
Fr Mildew quotes from a letter in an obscure magazine saying, "According however to the writer, they left in silence after his speech because of course, they had expected words of encouragement for changes and so called progress and got the complete opposite."
All I can find is a report from the Salford diocese's website:


Cardinal Burke focused on the need for Catholics to "reject a life of mediocrity" in the face of relativist, consequentialist and proportionalist views of thinking. The relativist says that we can act as we like since what is true for one person does not necessarily hold true for someone else. The relativist therefore denies a moral norm, a standard by which we can measure our behaviour. The consequentialist says that an action is right or wrong depending on the consequences that arise from it. The proportionalist says that we come to decisions about whether something is right or not based on a weighing-up of the supposed good or evil that might come out of an action.

These reduced visions of human behaviour are seriously detrimental to Catholic teaching and imperil the salvation of souls. The only solution is for us to take seriously the natural law, inscribed in the heart of every person. The natural law enables us to see what God is asking of us. Hence, for example, the natural law will hold that abortion, or contraception, or embryonic stem-cell research, is always wrong, whatever the perceived good coming from their implementation or use might be.

The spiritual ministrations of good priests and of consecrated people are vital in the Church, so that all people, young and old, might come to a knowledge and love of Christ.

I was there.... Some people left in complete silence with grumpy faces, including one gentleman who dared to question the Cardinal on omission of "the Kingdom of God" in his lecture.

Most people who left were buzzing - at least that's the impression I got. There was certainly lots of positive talking during the break before the Cardinal took written questions.

According to the university Catholic Chaplaincy the speech was on the 11th, not the 12th.

Perhaps the reason there is no official transcript is because it was a chaplaincy event and no transcript was made?

Fr Kelly, the chaplain there, while not when I knew him an EF enthusiast, is a pretty fearless guy and when I was at Salford (where he used to be) was always in clerical dress (very unusual for a uni chaplian in the 1980s) and was outspoken in defence of the truth and our souls (I particularly remember his denunciation from the pulpit one week of our habit over drinking - We had no proper church so Sunday Mass was in a room in the university "leisure centre" which at the time unfortunately had a large inflatable beer bottle hung from the ceiling. He came in with an icon of our Lady and during the sermon pointed at said beer bottle, pointed at the icon of our Lady and told us to choose which one!)

So I wouldn't have that place down as a nest of relativsm and if you look at the website it looks pretty orthodox.

This morning (Monday) I have put on a summary in great detail of what Cardinal Burke said in Manchester drawn from the Tablet article. Small wonder that progressives were upset.

Cardinal Burke should have kept his commitment to the Faith of Our Fathers Conference in June instead of dropping out at short notice (and leaving FoOF's in dire straits and vulnerable to being sabotaged by Westminster. I still have the train ticket for mum and myself that cost £95)
He would have found himself with likeminded people and got a resounding cheer. But we ended up being described (by Archbishop's spokesperson) as unsuitable group to be at Methodist Central Hall!!
Funnily enough, a GAY Conference was held at Westminster - but thats okay then.
There is my mistake. Being true to my womanhood,the Holy Father and the Catholic Faith.

Momaangelica
I entirely sympathise with you (and not just on the subject of expenses!) but HE was, as I understand it, somewhat wrong-footed by the some of the wording in the advance publicity. Don't be too hard on him. Paradoxically, the more power and influence one has, the more it is circumscribed by the very position which bestows it.

Sadly, Cardinal Burke has lost all credibility since his shocking behaviour over the Pro Ecclesia Conference in London. A man who cannot keep his word, and also prefers to listen to a few 'devout souls' while dismissing the hundreds who bought tickets to travel from all over the country to hear him.... holds no credibility whatsoever. (That's putting it as politely as I can.)

Don't you think H.E. was put in impossible situation by his hosts who in their advance publicity attacked his brother Bishops?

They, not he, made it impossible for the lecture to go ahead.

It was a technicality that could have been resolved.
The statement Obdurate was truthful seeing how 95%of our young leave the Catholic Faith when they leave school and are so ignorant in the subject ( as you witnessed on your train journey).
I battled hard with the school my six children attended.
It was clear from Primery the back up was missing, the message in the R.E.Text books was not true to Faith. My children tell me they have the faith because of what I said to them. (now they tell me, at the time " who was I to say as you are a mum not a teacher")
Anyone who has meet Daphne Mc. (Cardinal did meet her) coud tell she has a firm grasp on the R.E.situation in Britain over the years. The Bishops are responsible for success or failures and should be big enought to take full on the distraught cries of concerned members of the Faithfull. For heavens sakes we are talking loss of eternal life here.

Cardinal Burke did the only thing he could have given the shrill and intemperate attack on the English hierarchy (as deserved as it may be) by his purported hosts. Their misfortune was a thing wrought by their own actions.

So, on this feast of Forty Martyrs, where we honour the bishops and good priest who were put to death most cruelly for upholding the truths of the Romn Catholic Faith, you think that urging year after year for the same loyalty is intemperate and shrill? If you ever have meet Daphne, shrill is not an adjective you could place on her anyway.
Again, this is a life or death subject and one could be allowed to scream when someone is falling into an abyss don't you think?

H.E. choose the subject of the talk he invited to give. H.E. is sent every issue of The Flock, the newsletter published by Pro Ecclesia et Pontifice, as are many other Cardinals and Bishops! it seems that their are other "faithful Catholics" who's views are more...

Fr Ray, as a priest (let alone bishop, cardinal etc) didn't he think of the people he had commited to address, those of us who made considerable sacrifice to buy tickets, book travel, accommodation etc, to hear a Cardinal from Rome? Or did human respect, and the opinion of a few 'devout souls' he met at a conference count for more than all of us laity who feel further abandoned by Rome????

Jamie,
And what would his credibility have been reduced to if he had spoken at a conference which in its publicity had denounced the Bishops of England and Wales?
PEEP made it impossible for him to come and say the things he would have wanted to say and which we should have heard.
Having merely accepted the invitation of PEEP he is compromised in any criticism of the hierarchy.
If you are after a refund it is PEEP not H.E. who have a duty to pay. Their advertising material showed a remarkable disdain for their guest and it has damaged the excellent work of Daphne M.

Fr.Ray,
You think Daphne was wrong to say what she did about the Bishops of E&W. But the term "obdurate" was such a mild one really.
Anyone would think it was a foul statement she had made. If we have to keep silent about anything Bishops cause us to be concerned about, you never know where it can lead - do you. We are in a different age now and ills have a different face, we should never be afraid to shout from the rooftops when something is wrong.
God Bless for your great blog