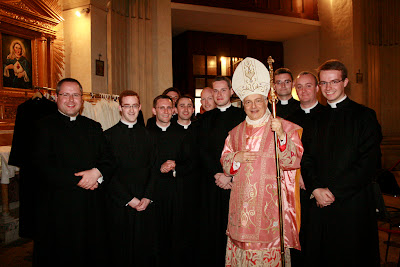 The Cardinal with students from the Irish College
There is another very interesting speech by Cardinal Mauro Piacenza, prefect of the Congregation for Clergy on Zenit, on celibacy but what he says about the hermeneutic of continuity and the unbroken Magisterium is interesting.


Above all there emerges the radical continuity between the Magisterium that preceded the Second Vatican Ecumenical Council and that which came after it. Albeit with accents that demonstrate the different sensibilities of the times, some more liturgical-sacral, other more Christological-pastoral, the unbroken Magisterium of the Pontiffs in question is consistent in basing Celibacy on the theological reality of the ministerial Priesthood, on the ontological-sacramental configuration to Christ the Lord, on the participation in His unique Priesthood and on the imitatio Christi which is implied in that. Only an incorrect hermeneutic of the conciliar texts could lad to the conclusion that Celibacy is something left over from the past and from which one ought to liberated at the earliest opportunity. Such an approach is not only historically, doctrinally and theologically erroneous, but it is also extremely damaging to the spiritual, pastoral, missionary and vocational outlook.

I think the 'ontological-sacramental' defence of celibacy is valid and inspiring. It's application is wider than the ordained priesthood. But we know that scripture, church history and the practice of the eastern churches present us with other perspectives.

What a fine looking group of seminarians, and all wearing cassocks.

Maybe, things are looking up in the Irish Church.