Margaret Forrester Came for Help at the Blognic 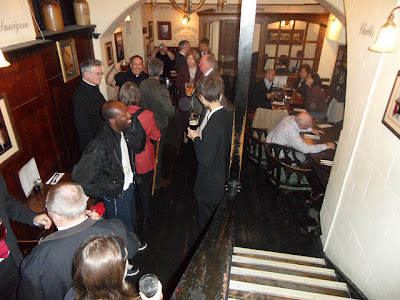 thanks to Fr Tim for the picture
Last night I was up in town for the blognic with Fr Z, Fr T and Fr G, along with James Bradley. It was a good time, there were a few other bloggers, and readers too. I always enjoy meeting people who rejoice in their faith and want to share it.

But that is not what I wanted to draw your attention to; someone came to us for help and we didn't respond.

A lady introduced herself to me, then someone else interrupted, so I didn't have the chance to speak to her, I think she said she was Margaret Forrester, I had a vague recollection of her name, she also mentioned Neil Addison, the Human Rights lawyer, she did say to someone else that she wanted to talk about her situation.
When I got home late I found I had received this email from Neil:


On 15th November the Central London Employment Tribunal will begin to hear the case of Margaret Forrester v Central London NHS Trust. She is being represented by Mr Neil Addison, Barrister and Director of the Thomas More Legal Centre. The case is an important one not just for Catholics and other Christians but for everyone who believes in Freedom of Speech.
Margaret Forrester was employed by the NHS as a Mental Health worker and in the course of a conversation with an NHS colleague who worked as a receptionist organising Abortion appointments she gave her colleague a booklet called "Forsaken" in which 5 women who have had Abortions talk about their experience of Abortion and how it affected them.

"You distributed material which individuals may find offensive" which is described in the Statement of Case presented to the Tribunal as a charge which is "so vague as to be meaningless"
Margaret was given a final written warning and told she would be moved to another department. She subsequently objected to the move and was then sacked.
It is very important to note that

The conversation between Margaret and her colleague was cordial and the colleague did not object to receiving the booklet and has never suggested that it was forced on her. Indeed the NHS are not even calling her as a witness in the Employment case.

The Booklet simply consists of Five women talking about their own experiences of Abortion and how they felt about it then and afterwards. It does NOT say that Abortion is a sin though some of the women say that is how they now regard it

Margaret had NOT given this or any similar booklet to any colleagues in the NHS before and had never been told that she was not allowed to do so
In their defence given to the Tribunal the NHS states that their reason for disciplining Margaret is because the Forsaken booklet offered a "religious view" on Abortion ie they admit they objected to it because it is religious. They objected to it because one of the women who has had an Abortion said that she now regards what she did as a sin. They ignore the fact that as a Mental Health worker Margaret had to be concerned with whether women who have had Abortions would suffer mental health problems.
What the NHS has done to Margaret is something which even supporters of Abortion should be concerned about because it goes to the heart of the issue of free speech within the NHS and within Society as a whole.
Besides bringing the Employment Tribunal case the Thomas More Legal Centre would also like to bring a case under the Human Rights Act for breach of Margarets right to freedom of speech but to do that we first need to build up a fund to cover Margarets liability for costs should she lose. Margaret is being represented by the Centre on a pro-bono basis so we are not charging her for representing her.

Through your Blog the Thomas More Legal Centre would ask your readers for their prayers and support on the 15th November and during that week. If anyone would like to offer any financial support we would be grateful. Details of how to donate are at www.thomasmorelegal.org.uk/donate.htm

My appologies to Margaret for not making time for her. If you can help her in anyway through prayer, publicity of her case, or financially please do so.
at October 11, 2011

As a trade union activist for many years, and a lecturer for several years in the field of industrial relations, I an appalled.

When working in both the public and private sector I have encountered evangelical protestants who proselytised vigorously among their colleagues, with no suggestion that they should be disciplined. What about teachers who run Christian groups in schools? (Again, this is a field in which evangelicals score highly.)

I really can't se why we need a right not to be offended!

Given what we know about post-abortion trauma this booklet seems a reasonable way of providing information in order to offer the most sympathetic help in a purely humanitarian way to women undergoing such mental trauma.
As this is an upcoming case, I'll be careful about my comment. We don't know all the facts.
But, on the face of it, the action against Margaret Forrester was taken on the hypothesis that some unknown person might have been offended. Weird.

slatedWhat an appalling case in our "free" society! Margaret and her lawyers can be assured of my prayers
Marysia

Satan will continue to lob little bombs at you, like one of the 'Faithful' that interrupted you.

Attacks always come from within.

Your Sheep need you to do so.

Martyrs like this woman are the prelude to the martyrdom of Priests which will precede the anti-Mary.

The anti.Christ will not just appear and have immediate authority.

These things are paving the way for him.

Bullies are easily offended and some of the overpaid substandard managerial staff in the NHS have to do something to try and justify their useless positions.

Bullies and Cowards,they should be weeded out and given the only job they are fit for,the recycling unit. Not that the present workers there are in any way inadequate,they could do with a break.

These are the same type of people who herded thousands of defenceless people into Gas-Chambers for their beliefs.

It sounds as if she needs a good legal adviser.

I hope she can find one who can help.

If you read the article Margaret has found a good legal advisor. She is being represented by the Lawyers of the Thomas More Legal Centre free of charge

God our Father, source of life and freedom, through Your Holy Spirit, you gave the Carmelite, Titus Brandsma the courage to affirm human dignity even in the midst of suffering and degrading persecution. Grant us that same spirit so that, in refusing all compromise with error we may always and everywhere give coherent witness to Your abiding presence among us. We ask this through Christ Our Lord. Amen

"I really can't see why we need a right not to be offended!"

We don't need one, and we don't have one. That "right" only goes one way. You have no right to be offended by abortion, only opposition to it.

People who want to suppress opposition to their social agenda use this kind of faux-outrage to their political advantage. It is amazing that it works. In any event, we need to stop giving them credit for being fair and consistent. This lawsuit is not about principle.

Look at all the qualifiers Father put in his post. Those are all the ground we have already conceded to people who kill babies in the name of sexual freedom. Let's stop apologizing for being so "insensitive" as to suggest that some mothers might actually be scarred by killing their children.