My sort of Socialism 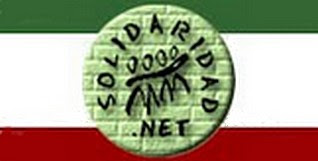 I have just seen this on Iona Catholicism, it is my sort of Socialism:


Spanish political group, Solidarity, has issued a press release explaining that its ideology has led it to defend the right to life of the unborn from conception to natural death, in clear opposition to abortion.
In its statement, Solidarity said, "We are socialists and we oppose abortion and its legalisation. We oppose all attacks on life: the death penalty, torture, hunger, the arms race, war, slavery," Catholic News Agency reports.
The group called abortion "an odious act of violence carried out against the unborn and against mothers."
"With such a 'pseudo-progressive' measure as abortion advocacy a so-called socialist party, headed by Zapatero, has explicitly put forward a neoliberal political and economic capitalist program," the statement said.
The statement later indicated that "the womb of the mother should be the most protected place in nature. Society must also protect children and mothers before and after birth."
One of the members of the group, Jesus Berenger, 41, explained, "I am part of the left and the left before used to defend life, the weakest, but now the parties are driven by their interests. I defend the dignity of the person. I am against hunger, exploitation and abortion, which is murder."

And that puts them squarely in opposition to the teachings of Holy Mother Church.

I do not want to belong to a club that would have someone like me as a member.

My Kind of Fascism
Father, I'm rather surprised that any Catholic would commend a socialist/left-wing party just because it was opposed to abortion.
There are at least four fascist parties here in Spain which campaign against abortion. Chesterton/Belloc/Leo XIII etc.
regarded socialism as an error spawned by the evils of capitalism.

There could be more of this in the years ahead. A driver might be ethnicity. A growing number of intellectuals are aware of the demographic timebomb now ticking in Europe to which abortion has contributed. Furthermore, political and economic instability has lead to some interesting banners being unfurled at rallies in Greece, for example. There, the "left" (or whatever they are) are starting to blame a particular group for their country's predicament and are not afraid to hide their views thereupon.

Thanks for this interesting post.My kind of sociaism too!

Hmmm. Glenn has a point about exercising caution here: far-right and far-left wings have a nasty habit of going full circle and becoming one and the same. I also agree with Sadie that the main driver here may be racial or cultural diversity, but that shouldn't be a bad thing.

This is fantastic as a beginning for more open discussion on the culture of death in Spain. Sadly, this stand is connected to socialists, but we must encourage such support in Europe, as there is so much opposition. If a socialist can be open to life, perhaps he or she can be open to democracy and the true teachings of the Catholic Church. If Americans knew how little support for anti-abortion groups there was in Europe, perhaps they would understand this more. In England, there are no parties which have come out against abortion, that I know of...so the conversation in Spain is a good thing, albeit imperfect.

"I also agree with Sadie that the main driver here may be racial or cultural diversity, but that shouldn't be a bad thing".

I am saying the opposite! LOL!! I am talking about an emerging ethnocentricity amongst European intellectuals: is it logical for Europeans to kill their own tribes within the womb? This is an ethnocentric view of the World not christian nor even a moral one. Even if the Spanish outcome of this debate is moral i.e. an anti-abortion stance.

It also needs to be understood that communism and fascism are not polar opposites. They are merely variations or hersies of socialism. Since World War II, it has been fashionable to buy into this fascism v communism paradigm for if nothing else to explain away how the "allies" came to include the Soviets on their side. It's an intellectual sleight of hand which continues to con many people. For example, the UK declared war on Germany because of their invasion of Poland but why was war not declared on the Soviets who also invaded?

Until Europe faces up to the complete absence of logic in the events of 1939 both it and the Catholic Church are doomed, in my view. The failure at Vatican II was because our intellectuals started to think as stupidly and irrationally as their secular counterparts and look what has happened to us since 1965!

There is such a lot of money to be made out of giving people"The Human Right" to commit MURDER that one is bound to step on the toes of powerful greedy individuals.

Abortion Clinics must be getting on to being one of the biggest employers in this country at the moment.