Some thoughts on faith 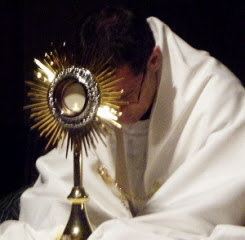 Reflecting on Bishop Davies words on Faith at the Confraternity of Catholic Clergy - he reminded us that Kiko Arguello had the unnerving habit of asking bishops, "Do you believe?" - it struck me that faith is infectious. It is caught, not taught, actually it is taught too but people need to see it and to have an example of it. That is why the heroic example of the saints has always been important. I am quite convinced that "Does he believe, does he live by faith?" should be the main question asked about any potential bishop.

We can ascent to propositions: I believe in God the Father, Son and Holy Spirit but as St James reminds us faith without works is dead. Belief should make difference in our lives, it was belief in God that led Abraham to leave Ur of the Chaldees, it was belief that caused Mary to visit Elizabeth, it was belief that sent the Apostles out to evangelise and to draw men and women into the Church. As Bishop Davies reminded us it was faith in the sacraments that led the Cure d'Ars to spend hours before the Blessed Sacrament and in the Confessional and the faith he showed that transformed the faithless town of Ars into the place where the Cure heard the confessions of an estimated quarter of the population of Francee.

The liberalism or relativism of the 70s tended to destroy, be contemptuous of or even ridicule faith, replacing it with cunning plans, projects and schemes, and eventually when these failed to yield fruit, apathy. What has always impressed me is that Gospel is always, from the beginning, passed on by individuals, often within the context of the apparent mess of Divine Providence.

We can talk as much as we like but faith and its fruit: evangelisation, is the result of "heart speaking to heart".
Bishop Davies reminded us of St Charles Borromeo going into a church and finding the Blessed Sacrament mouldering in a tabernacle with the door hanging off. St Charles knelt before it, he continued kneeling in prayer, eventually others started to join him, he continued to kneel, he knelt through the night, eventually the whole parish came, even the Parish Priest and knelt with him until he celebrated Mass and restored the Lord. Not a word was said, said Bishop Davies, no condemnation, just this act of faith.

The subtext of the Bishops speech was, do we live by faith?

When I was ordained a wise priest said to me "Make sure you are always as prayerful and reverent when you are in church on your own as you are when you know someone is watching you."

"Does he believe, does he live by faith?" should be the main question asked about any potential bishop."

Father, you write: “I am quite convinced that ‘Does he believe, does he live by faith?’ should be the main question asked about any potential bishop.”

For we — even, for wee — Scottish Catholics such considerations have a degree of urgency. At the present time, the Nuncio, His Excellency Archbishop Antonio Mennini, has an archbishop to find for Glasgow, a bishop for Dunkeld and an auxiliary bishop, or coadjutor archbishop, for St Andrews and Edinburgh. Moreover, it is believed that a new bishop must also be found for Galloway. In addition, within less than two years he will also have to find an archbishop for Edinburgh (unless he is to appoint a coadjutor instead of an auxiliary) and a bishop for Motherwell.

And, if Scotland is to continue to be honoured with a resident cardinal, one of these archbishop nominees is going to have to be truly exceptional.

For the record,and in chronological order:
Glasgow: Archbishop Mario Conti submitted his resignation as required under canon law (CCJ 1983 n401 §1) to the Holy See on March 20, 2009, upon attaining his 75th birthday. Even bearing in mind that we had to have an unanticipated change of Apostolic Nuncio due to the illness of Archbishop Sainz Muñoz, over two-and-a-half years is a relatively long time to wait for an appointment of a successor in a relatively small metropolitan archdiocese in a wee country.
Dunkeld: Bishop Vincent (Paul) Logan has asked Rome to accept his early retirement for reasons of ill health, as per CCJ 1983 n401 §2; he was 70 on June 30.
Galloway: Bishop John Cunningham will be 75 on February 22, 2013. However, although no formal announcement has as yet been made, it is know that His Lordship has serious health concerns and is minded to ask, if he has not already asked, Rome to accept his early retirement, again as per CCJ 1983 n401 §2. Even if his early retirement does not happen, it would be unthinkable that Mgr Mennini would not ensure the prompt acceptance of his retirement on his 75th birthday.
Motherwell: Bishop Joseph Devine will be 75 on August 7, 2012.
Archdiocese of St Andrews and Edinburgh: Keith (Michael) Patrick Cardinal O’Brien will be 75 on March 17, St Patrick’s Day, 2013.

Hughie,
Get people to write and write to the Nuncio and Congregation for the Bishops and mention suitable names.

Praise good priests, Rome is always in search of names, let them hear them.

"Does he believe, does he have faith?" Is this intended to be the same question? People certainly seem to think that having faith means believing half a dozen impossible things before breakfast etc. Your readers might like to see the recent book by Laurence Freeman OSB called 'First Sight: the Experience of Faith' on faith as a personal experience and relationship with God, something different from belief as an intellectual assent to merely abstract propositions. It is a common confusion.

We should emphasise the link between credere and fidere, intellectual ascent to a teaching and its fruit: fidelity and trust. The rupture is highly problematic, a bitter fruit of the Spirit of Modernism.

There you are Hughie....what was so difficult about that.

Oh, and get Fr Farrel of Opus Dei, to add a Hail Mary....success assured.

From Wee Jimmy, born Bellshill, brought up just North of Coatbridge, and now living in Englandshire.

It seems that in the Bishop Davies we have a "new" ("old") type of Bishop for which we long. Let us pray for more. When Milton wrote "The hungry sheep look up and are not fed" he was referring to the Roman Church, but not in the context we say this today!

Great post; although as an aside there's a lot about Arguello I find quite unnerving!
I agree that faith is infectious; it can certainly be "caught" from an inspirational teacher. But I don't really think you can "teach" faith as much as show it.
There's always that subtle interrelation between belief and faith: I see Father Ray's quoted the Latin (naturally), although in New Testament terms the two words share the same Greek root. Surely faith encompasses belief. Belief as an idea or opinion can be based on logic or evidence, but faith goes much deeper, not requiring proof. I've always defined belief as engaging the mind and faith as engaging the heart and soul: we establish faith when we act on belief.
But I believe someone will tell me that's incorrect.

Oh, and what I also meant to say was yes, "Does he live in faith?" seems like a basic starting point when appointing a bishop!