The Pope on Assisi Three 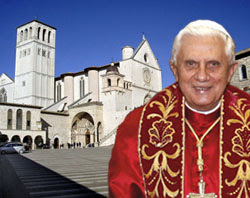 The confusion created by the "Assisi" events caused, and perhaps continue to cause, Catholics a great deal of confusion, so much so that the only act of public disagreement between Cardinal Joseph Ratzinger and Blessed Pope John Paul II was Ratzinger's pointed refusal to attend the previous events. It wasn't just a refusal but there were repeated public statements that it was a mistake and that it was odds with the CDF's document Dominus Jesus, written by Ratzinger in 2000.
Therefore the announcement that under this Pontificate there would be a third "Assisi" later this year surprised many.
Rorate publishes an extract of a letter to a Lutheran friend:


"I understand quite well - Benedict XVI wrote in March 4, 2011 - your concern regarding the participation at the Assisi meeting. However, this commemoration would have to have been celebrated in some way and, all things considered, it seemed to me that the best thing would be for me to personally go there being thus able to determine the direction of it all. I will nevertheless do everything in order that a syncretistic or relativistic interpretation of the event will be impossible and so that what will remain is that I will always believe and confess that which I had called to the attention of the Church with [the Declaration] 'Dominus Iesus'."

The problem will be not so much the address that the Pope will give but the pictures that will be shown. How will these ensure "a syncretistic or relativistic interpretation of the event will be impossible"?
at October 03, 2011

every great story and myth tells us that third time is lucky, and things are seldom fully resolved till the 3rd episode.

Holy Mother Church demands every soul must believe all she teaches.

To not believe the smallest thing is to deny them all.

Christ refused to even for a moment act like he was going to bend His knee before Satan.

All Satan asks is someone believe or show respect for even the smallest of his evil.

In doing so, he grants full membership through death to those that fall.

I don't go to Halloween parties; the Holy Father should take a pass on this party.

There are many other Catholic means of converting heathens and heretics.

The distance between 'Mortalium Animos' and 'Dominus Iesus' isn't that great but it runs over extremely rough terrain. The practical expression of Ecumania through joint prayer runs directly counter to the proposition that Christ and the Church founded by Christ are the single and necessary means of salvation. The Lex Orandi departs from the Lex Credendi with predictable results. Let us pray for our Holy Father.

It will be confused unless the Pope says something unmistakeably clear. It is strange to write this, but it is just very hard for me to imagine that any modern Pope would be clear in such a context.

It seems to me that the exclusive claims of the Christian faith are at best embarassing, and at worst scandalous, to modern ears. They direcly contradict our deeply rooted skeptical/democratic morality, making us look like backwards, sectarian, simpletons to our peers. Being products of our age, we too recoil a little at our Creed and look for reasons to soften its sharper edges. We have come up with some prety sophisticated ways of doing this, and I expect that Assisi will be so framed.

We have a Pope soon to be canonized, who stated this Assisi event. I see this continuation, as loyalty to his predecessor.

Cosmos seems to have given the true secular picture.

It is very telling that a Lutheran is pointing out the obvious to the Holy Father. The Assisi meetings, particularly by the impression they give, are utterly scandalous.

How can it not be relativistic when the Pope's own words of invitation said the following:

"It will aim to commemorate the historical action desired by my Predecessor and to solemnly renew the commitment of believers of every religion to live their own religious faith as a service to the cause of peace."

Pope Benedict is full of surprises. Don't count His Holiness out just yet.

How can it be relativistic when you haven't seen it?

Why not take the Holy Father at his word? He's done right by us in many respects thus far.

"It will be confused unless the Pope says something unmistakeably clear. "

He just did say something unmistakeably clear and Cardinal Burke said,

"The Holy Father wanted to underline the idea of a Pilgrimage to Truth: not in order to pray in various ways with the danger of mixing the supernatural faith and natural religions, rather a common way back to the one truth."

"He just did say something unmistakeably clear and Cardinal Burke said...

'The Holy Father wanted to underline the idea of a Pilgrimage to Truth: not in order to pray in various ways with the danger of mixing the supernatural faith and natural religions, rather a common way back to the one truth.'"

You think that is clear expression of the exclusivity of Christ? What it says to me is "I have my subjective beliefs about what is right, you have yours, but we can gather together as pilgrims and truth-seekers on the same journey back to one truth."

This is certainly the party line, and I understand the logic of the assertion. It may actually be a legitimate development of Catholic doctrine, that is for the Church to determine. But if you can't understand why some people read such statements as--at best--wishy washy, and--at worst--a rupture from the missionary tradition of the Church, I think you lack either sympathy or imagination.

I hope that this event will be nothing more than an exchange of pleasantries and some very tired and boring speeches, nothing more. The last one was a scandal to Roman Catholic and to Eastern Orthodox Christians.