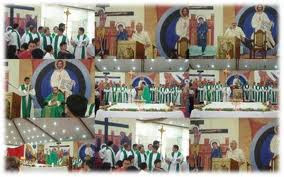 I have always been fascinated by the idea that much of Europe was converted by monks; the lives of loud, hairy warriors changed by the chanting of shaven headed disciples; barbarism by the order of the cloister.
It is something about opposites attracting, something about the power of the liturgy itself to change hearts. Reading St Bede one has the impression of Augustine arriving at Thanet and making his progress to Canterbury with an icon of Christ on a staff with an orderly band of monks singing the psalms, and in the wake of his road show leaving behind, if not converts, at least those hungry for conversion.
Reflecting on my own failure to convert hordes, I am sure that communities do it better than individuals: Jesus sends his disciple out in pairs. Further and more realistic reflection might suggest that even communities, certainly today, fail. In Augustine's day the Celtic monastic communities of the north, at least according to Bede seem to have run out of steam.
I suppose St Augustine would have brought with him not only choir monks but brothers, and presumably a gaggle of oblati and monastic servants or even slaves, whether these would have had families or not I am not sure.
The monastic model for evangelisation was about demonstrating Christianity.
I have always prayed for an obviously committed Catholic family to move into the parish with a host of children, it hasn't happened, yet. When I meet them in other priest's parishes, I am envious. They evangelise me.
Marina Corradi writes about a Neo-Catechumenate initiative in the East German town of Chemnitz, in which several large Catholic families have settled.


You are silent, because a "normal" Christian, already at wit's end with his few children in his own country, is mute before the faith of these families; witnesses of a God who asks for everything, but gives much more than what he has received. You are silent before the serenity of the four lay sisters who help families in their daily necessities: "I just wanted to be at the service of God," says Silvia, from Rome, with a smile that you rarely find in our cities. Do they see them, these faces, this singular joy, here, where they no longer believe in anything? When the Neocatechumenals explain that they have come from Rome and Barcelona to proclaim that Christ is risen, the people of Chemnitz recoil in distress, as if awakened from a deep sleep. Sometimes they respond, "We would like to believe you, but we can't."


Two generations without God are a lot, to the memory of men. But when, one day, some of Professor Rebeggiani's children began to sing from the balcony of their home – for the pure joy of it – the ancient song "Non nobis Domine sed nomini tuo da gloriam," the neighbors came to the windows to listen. And a widow asked the young people to sing the same song at the cemetery, in memory of her dead husband. They did, and one of those present approached them at the end: "It's been such a long time," he said, "since I heard anything that gave me some hope."

One of the things about the "New Movements" right across the spectrum is that they form communities, they live the faith, they have a sense of joy about them, they challenge contemporary values. The Pope sees them as the way forward, crucial to the reconversion of Europe. Our own bishops are perhaps a little more circumspect, they seem to see them as being divisive or they can be flawed, like the Legionaries of Christ, they can be a little mad and challenging. They are certainly risky, perhaps we haven't yet got to a situation of desperation. But it is the New Movements, with families, that really do seem to challenge and offer "new" to contemporary society.
at September 21, 2011

Well, I guess my family won't be evangelising anyone as, in God's will, we "only" have two children .... I know many devout families with no children, one child, just a couple.

Those other Priests are tending the obedient sheep; go out into your parish and round up those sheep Satan has stolen.

When you are judged, you will be surprised at the hordes that show up claiming their private conversions came from watching you be a faithful Padre.

Do not let Lucifer distract you.

Interesting, monks were once countercultural now, yes, it is families obviously open to children.

I honestly can't say that I trust any of the New Movements.I'm not sure that family life is supposed to be so cult like.

There has been a lot of talk recently of countries such as those in Africa and Asia sending missionaries to re-evangelise the West. It seems to me that the Catholic Church as a whole has forgotten how to evangelise.

I think that the sooner these foreign missionaries come the better. I am sure that they will play a large part in the hoped for conversion of England.

It would be unkind to move a large Catholic family into your parish.

In the most atheistic city in Britain there remain plenty of opportunities for evangelisation.

Do the red, say the black.

Well, we have ten children -eight at home, one a nun, another already married-, we leave it in the hands of God...

'we leave it in the hands of God'

And there lies the answer!

All we can do is lay the foundations stones by teaching the faith and our commitment to God.

Lucy, we 'only' have three. It would have been nice to have a minibus full, but there you are. I'm lucky to have three. And you're right, the number of kids you do or don't have isn't an automatic indication of how 'Catholic' you are, although I've encountered people who think it is.

Is 'Alpha' classified as a 'New Movement?'

I have seen banners in England only outside churches belonging to the C of E so I have been surprised to see adverts now for 'Alpha' on both the site of KTO the French Catholic TV channel and the site of the French Bishops. The slogan of 'Explore the meaning of life - over a meal - come as you are' sounds more like the invitation from a dodgy sect. Am I wrong?

They would be castigated by our GREEN MP Caroline Lucas.She says it is irresponsible to have children as it endangers the Planet.

She has already had a go at the Beckhams and is in cahoots with the OPT (Optimum Population Trust).

Pelerin, apparently Alpha started in the CofE and has been adopted and adapted by a plethora of other Christian groups – including some in the Catholic Church. I first heard of it from my sister earlier this year when it was introduced in my home parish in Ireland by a young Curate teaming up with one of the Sisters of Mercy. She was very taken by it.

There have been some criticisms of certain theological aspects of the original series and of it being of a charismatic bent, with much emphasis on freedom of expression. This suggests a pitfall to me (‘personal interpretation’), if someone is not moderating the discussions and proposing the real Truth once all views have been heard. I don’t know how much these concerns have been addressed in the Catholic version.

I wouldn’t think of it as a ‘cult’ as yet, just an honest attempt to deepen one’s faith. But like all new movements it can be open to error and misdirection without proper oversight by the Church.

Christianity is a dodgy sect, anyone who takes their Christian faith seriously in our society is classed as a zealot.

Father, if you want a Neocat mission family in your parish I suggest you may want to speak to Lorenzo Lees whose contact details are on www.rcdow.org.uk/youth/organisations.php.

If the Neocats can figure out how to respectfully integrate into a traddie parish, then it might be a winning combination. In the context of Brighton culture they could be a strong witness. This year they led a eucharistic procession through Soho on a Friday evening. Although they faced much derision some men from the crowd spoke to them afterwards and wanted to know how they could have the same spirit of joy and realised their lifestyle did not bring happiness.