Take the Vineyard from You 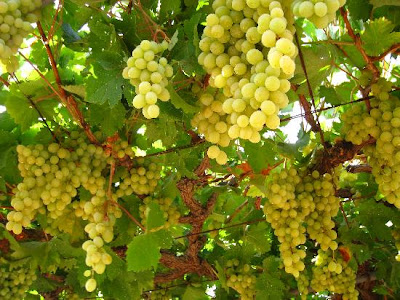 Our image of God the Father is important; it frames how we live our lives.
Today we tend to think of God as distant, maybe even disinterested, we model him on the virtues or otherwise of our society. Today even amongst believers God seems to be a doting, tolerant, semi senile grandfather.
For “the Jews”, the spiritual and secular leaders of Jesus’ own people, God is slow to act. Year after year they tend the vineyard, not for God but for themselves. In Matthews Gospel they have already questioned Jesus about his authority to act and speak as he does, the parables we are hearing during these Sundays are Jesus answer.
Jesus reminds them that God, the vineyard owner has been tending the vineyard, that he has indeed been sending the prophets, “the rent collectors” but they have been mistreated, even killed, by those who have charge of the vineyard, the tenants, [not their workers]. Ultimately they will kill the Son. All this said against the background of John the Baptists killing and the growing hostility to Jesus. Jesus understands what they intend to do to him.
The Jewish leaders here think they can carry on as they have been, God is distant for them, benign, tolerant. There is no judgement no retribution. But here Jesus gives a warning.
In the Gospels the destruction of the Temple and Jerusalem is seen as a direct result of the rejection of Jesus. In the New Covenant God replaces the Temple with the Church.
Both Israel and the Church God promises never to reject, he is faithful to his promises, but this is still a warning to religious and secular leaders. The promise to the Church I will be with you to the end of time should not lead us to complacency. The great centres of the ancient Christianity have lost their importance, where is the church in Antioch or Alexandria, or even Constantinople once the centre of Eastern Christianity, now with just a few thousand resident Christians.
Even Rome itself has fallen from time to time; remember the time the papacy fled to Avignon. In recent times the “power base” of the Catholic Church has shifted from Europe to Africa and Asia. In theory it is possible that Bishop could live in Uganda or the Philippines or Korea.
The temptation for High Priests and Elders of the people is always complacency, if they do produce fruit in due season the vineyard will be taken from them and given to those who will bear fruit - is this what we are seeing in Ireland and Austria with so many priests and lay people in open schism?
at October 02, 2011

St Michael and Michael Petek I think you are both heading into area of speculation and or private revelation on which I am not competent to make a judgement. Therefore I have removed your comments.

Both of you might do well to read "Jesus of Nazareth vol. II" by the Holy Father.

The Sunday readings were indeed very, very powerful. I include also the readings from the Sunday's "Office of Readings", the second of which includes these words by Pope St. Gregory the Great:-
"If a religious leader is afraid to say what is right, what else can his silence mean but that he has taken flight?"

I don't feel "equipped" to comment on the politics of the Catholic Church - and wherever you have human thought and thoughtfulness you will have politics. But surely the church, congregation and clergy, can evolve, as the fruit of the vine does, without diluting it's strength or it's ability to sustain; the word of God's love?