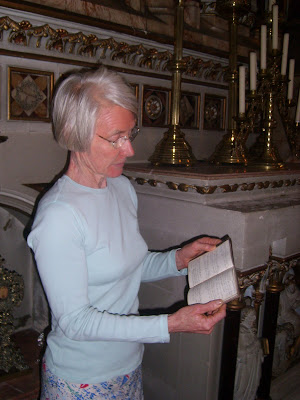 A few days ago I had a phone call from a Phillippa Hunter who is the great granddaughter of Gilbert Blount our architect. She came down to take some photographs she was a mine of information. It seems as if some of the mre splendid glass in the Church was designed by him an executed by Hardmans. There used to be a glorious paschal candlestand here, presumably also by them. We want to create an online history of the Church, so the work Philippa is doing will be of great value. She also brought some photographs of Blounts other churches, they are all rather gloomy but with jewel like windows, other thing he seems to do is set rare pieces of marble in ordinary stone again creating a sense of jewel-likeness.
It was fascinating to see his diaries, Phillippa is reading one in the Church, she also gave us a photograph of a miniature of him, and told us about his recussant origins.

Blount was an English Catholic architect active from about 1840-70. He received his earliest training as a civil engineer under Brunel (c.1825-28) for whom he worked as a superintendent of the Thames Tunnel works. After a period in the office of Syndney Smirke, Blount was appointed as architect to Cardinal Wiseman, the Catholic Archbishop of Westminster.
Blount's mature work coincided with the resurgence of Catholic church building in England. His activity as an architect was largely in service of the need for new churches and related ecclesiastical institutions.
About the CollectionHoldings include studies for eleven churches (1844-74), two tabernacles, reredos, two pulpits, a stained glass window, twelve high altars. Among the churches are St. Ambrose Church, Kidderminster, Worchestershire, 1858; St. Edward, Clifford, Yorkshire, c.1844-45; St. Mary, Husband's Bosworth, Leicestershire, 1873-74; St. Mary Magdalene, Brighton, Sussex, 1861-62; St. Peter, Gloucester, 1859-60, 1867-88; Our Lady and St. Catherine of Siena Church, London, 1869-70.

I know a little about Hardman of Birmingham. Their stained glass and brass work was the best ( and most expensive). Obviously no expence was spared at your church in the past!

Hello, Do you still have contact with Blount's great granddaughter please? I am researching St Dominic's Priory at Carisbrooke that he designed. Thanks in advance. John (elmstones@aol.com)