The Name of God not to be used 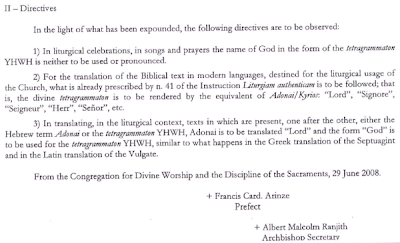 The Congregation for Divine Worship and the Discipline of the Sacraments has issued the instruction that that name which was only uttered once a year by a priest, chosen by lot, in the Holy of Holies of the Temple, has issued the following instruction.

I hope that all those ghastly charismatic hymns that trivialise this most holy word will now be removed from "Catholic" hymnals. I know that the biretta is doffed at the Holy Names of Jesus and Mary and one bows the head on hearing them, I have never known what to when hearing this word. I just tremble.
at August 12, 2008

This is good, but, what about translating 'O Adonai', from one of the 'O' antiphons in the week leading up to Christmas ?

Shall we still be allowed to utter "Alleluya"?

This is rather interesting. I wasn't aware of any Catholic tradition of following the Jewish usage that the Tetragrammaton is not to be uttered.

We do, however, utter the Name of Jesus and write the Name of God without spelling it 'G-d'.

I had assumed that 'Jesus' and 'God' are interchangeable with one another and with the Tetragrammaton, and are equivalent to one another in the reverence due to Them.

That is a bit strange. The tetragrammaton stands for something which nobody now knows how it was voiced but in Hebrew is often translated into Hashem, which means The Name. But it was almost certainly not the name used by the people who give away the Watchtower.

However, since Father, Son and Holy Sprit are One, surely the name is Jesus, Yehoshua in Hebrew which translates "he will save".

True, we are not Jews and should we not be able to utter the name YHWH? However, I have always thought that using it in modern liturgy does coem close to trivialisation and am much happier with 'Lord'. A sense of reverence, modesty and humility is always a good thing. I can't help thinking that the reference to 'ghastly charismatic hymns' was not just a moan about the use f the divien name but a matter of personal taste, too. Some of them are very reverential, used in an adoration style ratehr than a 'happy clappy ' manner and help sem to really worship. There is a place for the good in the old and the new.

Maybe the pope had his fill of sappy songs, like the one that starts "Yahway, I know you are near, standing always at my side (barf, barf)"

not that the powers that be will not pretend not to have heard the new ukase.

Michael/ Henry,
Read the Athanasian Creed, I hope I misunderstand you otherwise you are both vile heretics, who should be handed over to the secular arm viz Brighton Corporation, to be cleansed by fire, as soon as possible!
The Word is pre-existant but Jesus was born of the Blessed Virgin in time.
"The Son is not the Father ....."

Yes, Father, the Word is pre-existent, and my home is a Nestorian-free zone.

The name 'Jesus' is as holy as the Name of God because it belongs to a divine Person in His human nature.

Henry's quite right: Jesus said to baptise in the Name (singular) of the Father and of the Son and of the Holy Spirit: Their common name, designating the divine Essence.

I've thought of another one!

The Tetragrammaton was pronounced once a year by the High Priest in the Holy of Holies, on the only occasion when he could enter it.

According to the Letter to the Hebrews we Christians can freely enter the Holy of Holies - it is our permanent home here and now.

The common priesthood of the faithful which is conferred in baptism represents a higher degree of holiness than that of any Levitical priest.

I am a post Vatican II convert. I love both the so called traditional and the new music. I used to run the Folk Group at the Cathedral which provided the music for the 6:30pm Mass each Sunday. I made every effort as leader to ensure that the music was reverent, well rehearsed and played, and approriate. I now sing in the parish Choir (singing traditional hymns and plainchant). I am also a charismatic... yes some of the hymns were not in the best musical tradition. Many were written by those who were not musically trained...but all were written and sung with great love and devotion to God. To infer that the Almighty can only be praised by traditional music is quite frankly wrong. Even so called traditional music if under-rehearsed, poorly chosen (ie not according to the liturgical season) or quite frankly just plain bad, can lead ones mind to wander away from the reason one has come to the house of God which is to to worship and adore God, and participate in the Liturgy (usually of the Mass). What is reduced or indeed missing (and I infer the reason why we are to be discouraged from using the Tetragrammaton) is a knowledge of, and an awe and reverence for God...an utter submission to Him, because of His amazing love for us. If as a person involved in the music ministry, I can aid the congregation in lifting their respective minds and hearts to God, and enable them to worship fittingly then I am fulfilling what God has asked me to do.
Regards maryclaire.