Be Generous to the Young 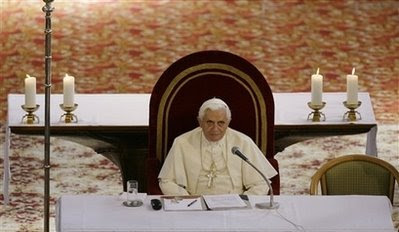 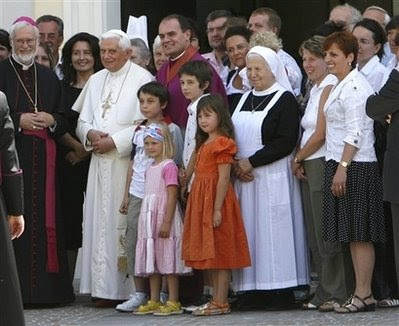 Catholic News Service
VATICAN CITY (CNS) -- Pope Benedict XVI said the church should be generous when it comes to administering the sacraments to young people, recognizing that Jesus would have done the same. 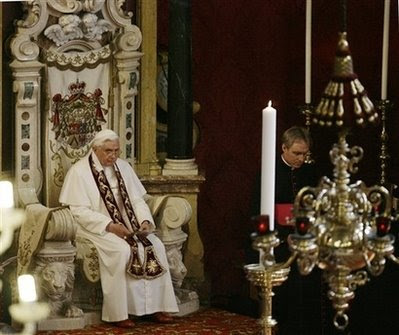 The pope made the remarks in a closed-door meeting Aug. 6 with about 400 priests and religious in the northern Italian city of Bressanone, where the 81-year-old pontiff was vacationing.

Although reporters were not allowed inside the city's cathedral for the one-hour encounter, the Vatican spokesman, Jesuit Father Federico Lombardi, described some of the give and take in an interview with Vatican Radio.

One of six questions posed by priests touched on the pastoral care of children, Father Lombardi said. In his response, the pope spoke about the need to take a broad approach to the administration of sacraments, reflecting the merciful attitude shown by Christ.

"The pope said, 'I used to be more strict about this, but the example of Christ led me to become more welcoming in cases in which, perhaps, there is not a mature and solid faith, but there is a glimmer, a desire of communion with the church,'" the spokesman said.

The pope concluded that in such cases one can be "broader and more generous in the administration of the sacraments," Father Lombardi said.

The spokesman said the pope answered questions with a combination of clarity and humility, underlining at times that what he was imparting was his own best advice, not an infallible response.

Asked about environmental issues, the pope said that in recent times the church has made a greater effort to connect its teachings on redemption with the need to safeguard the gifts of creation.

He said the real threat facing the planet and the human being today is a materialistic vision that denies God and denies the need to use creation responsibly.
at August 06, 2008

Pope Benedict XVI said the church should be generous when it comes to administering the sacraments to young people, recognising that Jesus would have done the same.

Oh dear, I can see it now - no need for confession,no need to fast, don't worry if you don't come to Mass every Sunday just come up and receive Holy Communion. Arrive any time you like for Mass - just arrive.

When does a young person stop being a young person and become someone to whom the Church rules apply? Will the young person know this? If an age is given theologians will argue that such and such and age is not appropriate for all and before we know it all of the requirements for the reception of holy communion will be kept in the breech rather than in the observance.

Victoria
I don't think that is necessarilly what the HF meant.
I would be stricter but there is danger then of Pelagianism or neo-Jansenism.

Reading the Pope's words as a parish priest, I immediately thought of the Baptism of infants rather than Holy Communion.

I just see at as a mother of 10 that people stop being so judgemental of the young if they're wearing low slung jeans rather than long skirts & mantillas!I know some of my most 'spiritual' children may not 'look' as holy..& I think the Pope is very well balanced in accepting the young as I have to say are the Priests at our Oratory.

"Safeguarding the gifts of creation" is a lovely phrase - and should be used more often. Being lectured by bossy lay people on "eco-friendliness" annoys me - but putting it from the perspective of the Creator (and acknowledging His gifts) makes it feel different - it speaks to the soul. Of course it would annoy all the atheists if Catholics redefined the problem, and used non-secular terminology widely and often but on the whole, I could not only live with that - but it would make recycling fun!

I'd still want to know what SPECIFICALLY the pope had in mind. Was he thinking of those who want our young people to wait so late to be confirmed that they lose the faith? Was he thinking of children who couldn't do their catechism properly for 1st communion but desired JEsus?

Was he thinking of parishes being nazi like in insisting that parents be practicing catholics (rather than the grandparents who might be) - and give the child the grace of the sacrament of Baptism?