More on PO'D on the Bishop's Conference 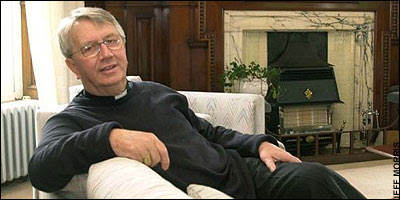 I do not know if this true, but I was sent a link to this blog when I asked somone whether they had heard anything about the latest "Fit for Mission" document from Bishop O'Donahue. Apparently it has been leaked widely.
See, if you haven't yet, the post about Bishop's Conferences I put up a few days ago. Seems like we all be crying Ratz has spoken through PO'D when it is released.

Roman Catholic Bishop Patrick O'Donohue of the Lancaster diocese in northwest England, has heavily criticised his fellow bishops of England and Wales for what he sees as a weak, "flat" response to many of today's moral crises, especially that of the radical homosexualist and anti-Catholic, secularist lobby.
A document is due to be published next week, in which O'Donohue calls on his fellow bishops to "rediscover" and fearlessly exercise their teaching authority in union with the Pope.

In the densely packed 92-page document, "Fit for Mission? Church", Bishop O'Donohue writes of the failure of the Catholic bishops of England and Wales forthrightly to face the issues of homosexual activism as a body.


He especially emphasizes his "disappointment that our Bishops' Conference recently could not agree on a collegial response to the Government's legislation on same-sex adoption."

"Attempting to arrive at a consensus among bishops with sometimes divergent views, Episcopal Conference statements and documents have a tendency to be often flat and 'safe' at a time when we need passionate and courageous public statements that dare to speak the full truth in love."

"I must admit that during my 15 years as a bishop I have increasingly come to share certain concerns about the relationship between individual bishops and the National Conference."


Bishop O'Donohue says he agrees with the warning of the 1985 Synod on the "necessity of limiting the authority of national Episcopal conferences."

The Bishop writes that the idea of dividing the areas of responsibility, such as education, liturgy and healthcare, among the bishops, has resulted in a "reluctance among the rest of the bishops to speak out on these issues."


He notes particularly that some bishops had reacted with "surprise" that he had dared to produce his own teaching document, "Fit for Mission? Schools", earlier this year.

"The effort to achieve a consensus" he says, "results...often in the loss of the 'scandal' and the 'folly' of the Gospel, so that we are no longer the 'salt' and 'leaven' so urgently needed."

"Confident, courageous and prophetic bishops [are] vital for the well-being of the Church during this time of increasingly aggressive secularism."


This rediscovery of the charism of bishops, he says, is needed to combat the loss of passion for Catholicism notable in many parishes and lay people.

"The passion to serve the Lord is noticeably absent in many cases - there seems to be at times a tiredness and reticence to preach the gospel." He says that in the course of the 16-month consultation in preparation for the document, he saw a "lack of confidence and knowledge of the Catholic faith."


He therefore calls for a revival of apologetics, the reasoned defence of Christianity, especially in the face of increasingly popular atheist polemics from writers such as Richard Dawkins.

In the document, produced as Bishop O'Donohue prepares to retire, he says that "Agencies and Commissions of national conferences" have failed to uphold the "fullness of the Church's teaching", particularly "doctrinal and moral teaching, in their collaboration with secular agencies."

"I'm thinking in particular of agencies with a responsibility for education or economic development. The staff of these agencies are often in a position to witness to the truth of the Church's teaching on, say, the theology of the body with its positive refutation of pre-marital sex, 'safe sex', or artificial birth control, in their dealings with government departments and committees."

Bishop O'Donohue does not name names, but many have made similar criticisms of the English Catholic bishops' overseas aid and development agency, CAFOD, that has insisted on promoting condoms as a means of controlling the spread of HIV/AIDS.

In another case, at least one Catholic adoption agency has opted to abandon its association with the Catholic Church to adhere to the government's requirement to adopt children to homosexual "partners."

When the problem of the Sexual Orientation Regulations and the Catholic adoption agencies arose in the news last year, it was revealed that many agencies held the policy of allowing children to be adopted to single homosexuals, and this with at least the tacit blessing of the local bishop.

Bishop O'Donohue's own suggestion for the Catholic social services agency was to have it adopt an uncompromisingly Catholic position and refuse to adopt to anyone who is not in a legal marriage.


In the document he criticises the administrators of Church institutions, saying, "There must be no back peddling on these issues just because certain truths are unwelcome in the corridors of power."

"We have talked too much and done too little. We have witnessed over the past forty years a growing crisis in the Catholic understanding or self-identity of the Church...Have we forgotten what it is to be Catholic?"

Hope for the future, he says, lies with the younger generation who are notably more interested in reviving the essentials of the Catholic religion.


"The maturity of the Pope John Paul II generation will lead, I hope, to a resurgence of orthodox, committed adults in the Church, gradually renewing vocations to the priesthood, religious life and marriage."

Basicly they have stopped been Bishops and started been politicians, pandering to the majority of the people in England and Wales. And as the majority are not Catholic we get what we have at the moment.

By trying to stand for everything they stand for nothing, by trying to appease everyone they merely anger all. Just as this pandering after approval by politicians makes people despise them so it does with the Bishops, it is all the more abhorrent as they do not require public approval to maintain their position but rather seem to do it out of an inordinate desire to be loved by men.

"Some people hope that nations, in spite of their differing religious viewpoints, may unite as brothers in the profession of certain doctrines as a common foundation. Certainly, efforts such as these cannot receive the approbation of Catholics, for they rest on the false opinion that any religion whatever is more-or-less praiseworthy and good. Those who hold this opinion are in gross error! Is it permitted for Catholics to be present at conventions, gatherings, meetings, or societies of non-Catholics which aim to associate everyone who in any way lays claim to the name of Christian? In the negative! This Apostolic See has never allowed its subjects to take part in the assemblies of non-Catholics." (Pope Pius XI, Mortalium Animos)

"We have become cowardly, faint-hearted, and, so often, for some reason or another, we keep silence. We let ourselves be overcome by human respect, and cease to show ourselves as true followers of Our Lord. Why? Because we are cowards! Oh, how we need to renew our faith, to rekindle our hearts in the sublime principles of our holy religion!" (St. Frances Xavier Cabrini)

As a priest in the Diocese of Lancaster I have yet to receive this document - I await it with interest!

To some extent, POD is telling us something we already know. I am not sure if he is offering us a plan of action to resolve or confront these issues.

Those from a traditionalist or old fashioned conservative outlook have bee saying the same thing for the last 40+ years but the POD generation steadfastly ignored them.