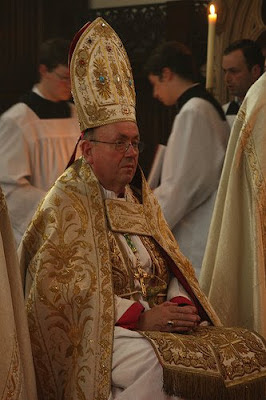 The most important part of the week were the celebrations of the Mass. I would love to be able to celebrate Solemn High Mass here, it is so beautiful. I am seriously thinking that next year, which will be my 25th anniversary of ordination, I might use the extra-ordinary form; that should raise an eyebrow or two amongst the clergy.
I love the constant call of Dominus Vobiscum and response Et cum Spiritu tuo, it is almost as if the priest and congregation need the reassurance of one another as they enter the divine presence. I love the symbolism of the celebrant being dragged about the altar by his assistants: being held at the altar lest he should flee. I love the of the idea of the scriptures being proclaimed as if the most important thing is hearing the voice of Christ and the actual meaning of the texts, important as it is, is secondary.
One of the most teaching things was Bishop McMahon of Nottingham celebrating Vespers, he knew more or less what to do but in practice had to be guided by his assistants. There was an moment were obviously someone was saying to him, “Turn, turn around, no, not to the left, turn to the right”. What it was saying, seemed to be that even a Bishop is subject to the liturgical rules. We give ourselves to the Liturgy, so we might be conformed to the mind of the Church, rather the Liturgy being given to us, so that we might do with it what we want.
picture: Fr Tim
at August 02, 2008

Your photograph of the blessing reminds me of the pleasant surprise I received when visiting a Missionary order recently. I asked for the priest's blessing before leaving and after a short prayer in English he gave me his blessing - in Latin! Perhaps it was something I had said in conversation which prompted him to do this but it was indeed unexpected and I returned home that evening with his words still reverberating in my mind. Wonderful!

You mention that perhaps you will be able to celebrate the EF next year. I do hope so - or even earlier if that were possible.
Thank you for all you are doing in this way. We are all most grateful.

Excellent Post Father! If I'm ever in England, I would LOVE to help serve that TLM. I encourage you to go for the TLM earlier especially on your 25ths Anniversary of your Ordination.

The Dominus Vobiscum, the laity's necessity in the Sacrifice is something I absolutely love, and miss when having to suffer through the ICEL Translations of the NO.