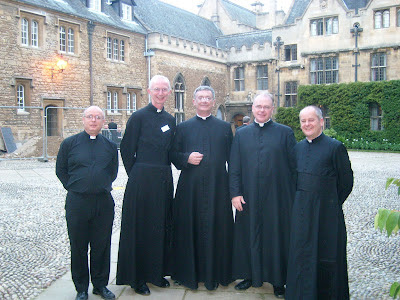 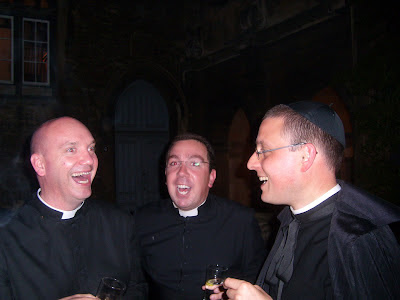 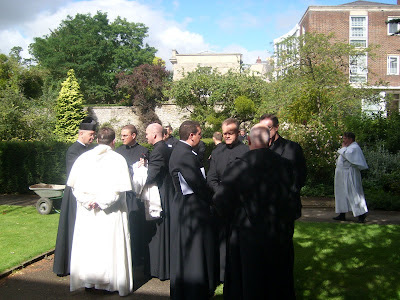 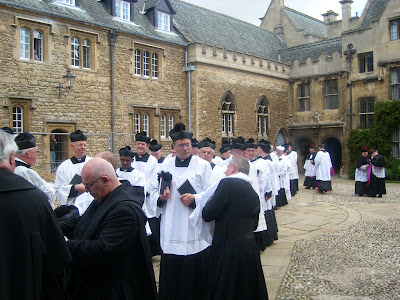 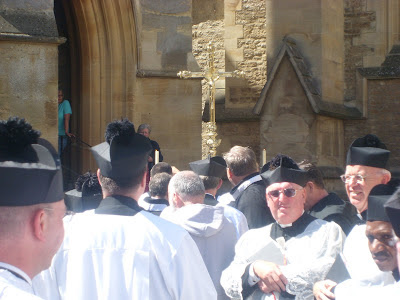 As I said earlier I was delighted spend time in the company of such a splendid band of priests. The Latin Mass Society have to be congratulated for pampering us a bit, with their generous hospitallity. Though someone did suggest that the strictures of the timetable made it feel like "Traddie Boot Camp"!
I was so glad to meet the learned Alcuin Reid, another of my heroes, during one of his talks he said that Summorum Pontificum had made the Traditional Rites and those who love them mainstream.
So many of the priests, without rancour, told of the crosses they had carried. A very bright friend of mine, for the first time, told me that when his bishop finally agreed to ordain him, told him that he would never be sent for further study because he didn't want him reading "those books". This is the same bishop who refused point blank to ordain another man because he wrote "those books". Such a waste! There were other priests who were just left to rot in tiny, poor parishes, with their talents and skills unused.
The younger priests, who really were in the majority, told similar stories, one who said the Traditional Mass on his day off attracted a congregation of four or five had his parish priest forbid them to be present.
I think the real difference between the generations is that young know that they have a friend and supporter in the Supreme Pontiff, and that they have the backing of the law of the Church. Priest of my generation and older men felt we were preserving something valuable from the past; younger priest know that they are at the beginning of something important for the future: they are the future.
I thought it was interesting that dioceses where bishops have shown themselves less than sympathetic to things traditional had the most participants: five from Clifton, four from Plymouth, four from Leeds where Bishop Roche issued an infamous document appropriating to himself rights given by the Pope to priests. There were also a sprinkling of priests from the US, Africa and one from Australia, and four monks from Belmont.
Apparently all the Bishop's of England and Wales were invited, only Bishop David McGough, who was preventing from coming by his sisters death, and Bishop McMahon of Nottingham accepted the invitation, no wonder he received such a thunderous ovation from the clergy at dinner, a little less than that give when he mentioned Pope Benedict which was accompanied by a great deal of table banging and cries of "Viva" and even, "Magnus est", and must of gone on for a couple of minutes, at least.
at August 03, 2008

I had the great happiness of attending the closing Mass, which was very beautiful and moving. It was wonderful to recognize priests from the Clifton diocese. I hope they and all those attending were inspired by the experience of participating in the week's events.

Great top photo of you and the rest of the "basketball team."

How many priests (roughly) attended?

Did not Bishop McGough, auxiliary in Birmingham, also accept, but was prevented from pontificating on Friday because of a family bereavement?

Tom, I had forgotten, I shall make a correction, thankyou.

BTW, Father, I was at Friday's Mass and thought it was splendid. Do you know the name of the priest who gave the sermon?

Thank you for all the witness and support you and priest like you give to the Church.

Tom,
It was Fr John Osman of Dorchester.

Is Fr. John Osman of Dorchester now a Mgr. ? I was wondering why he was wearing a purple sash etc.

John Carroll,
Father John Osman is a chaplain to the Knights of Malta, which carries with it, with in the Knights and on their premises, the automatic title of Monsignor. They automatically become Canons of Valletta Cathedral.
The Catholic Directory designates such priest as "Father", I understand outside of the Knights they should be addressed as such. I am not sure why they dressed as prelates at Merton. Father John described it as a "bit of nonsense".
It seems a bit silly that religious should be treated as a Prelate in choir whilst his Major Superior and Ordinary is treated as an ordinary priest.

"So many of the priests, without rancour, told of the crosses they had carried."

And their reward will be for carrying it.

But what awaits the people who set those crosses upon their shoulders? At least they are being given both the time, and the opportunity, to reflect and repent.

these pictures remind me of the Anglican walsingham pilgrimages,no doubt they will feel very much at home if and when they cross the Tiber!

"sermon" ? I thought Catholics called them "homilies". Can someone explain ? I thought this was a Catholic gethering.

I'm a bit surprised that Fr. Z was not able to participate at this event. I bet he regrets that he was not able to make it. He would have loooove to post this in his blog and fed his hungry followers with details. You're a step ahead Father Ray.

FFN,
You obviously have a deeper knowledge of these things than me. I have never been on an Anglican pilgrimage anywhere.

As far as I understand it these priests are dressed according to the rules laid down in the appropriate liturgical books. If Anglican clergy imitate Catholics that is their own affair.

Bernadette - as a cradle Catholic and altar boy with memories going back to the 1950s, I recall that our priests always preached a 'sermon' - and called it that in conversation. I never heard the word 'homily' until the changes came in in the 1960s.

So I think we're on safe ground talking about the sermon within Catholic circles.

The quicker this EF becomes the norm, the better. It is the only way the church will recover.

I have done some research whilst away which has convinced me that the matter is more important than I had ever realised. Both NO and vernacular have together done untold mischief. If I had anything to say on the matter I would aim to get rid of both except for special purposes. And I would make sure that all priests I was responsible for were able to say the EF mass, and I would set a realistic though not too distant deadline.

If anyone had intended to destroy faith they could hardly have thought of a better method than to make the liturgy "rational" and get rid of the chant.

bernadette - A homily is a reflection on the scripture reading for the day. It is designed to make the passages real in ordinary lives. The pastor does not get to choose the passages, they cycle so the entire bible is read over a period of time.

A sermon uses scriptural passages to explain an idea. The role of scripture is reversed. It is used to support an idea. So, for example, if you wished to do a sermon on adultery, you would choose passages that cover the idea and explain why God considers it a sin.

A sermon is designed to teach to a specific point. A homily is a reflection upon the passages designated for the day. A homily doesn't really have a point unless the particular reading had a point. (from the net to save time:)

Father - it is so nice to see priests that actually look like priests. So glad your time was fruitful.........

Fr. some of those "poor parishes" would have been very much enriched by the more traditional priests who went there. Sometimes its the "poor parishes" who can bear much fruit because the bishop isn't on their doorstep every two seconds. their architecture, though many times in need of repair, at least tends not to be wreckovated.

Looking at the pictures of the LMS Confernce I feel very concerned. Firstly I have to agree with "ffn" It does indeed look like the Anglican Walsingham Pilgrimages, but what seriously concerns me is the direction that the Church seems to be going, backwards rather than forwards. This seems to be further enforced by the language in the draft proposal of the new Missal. It is very legalistic, uncomfortable to speak and very Anglican. I am also seriously worried by the number of young clergy present. Come on, lets be realistic. When the Tridentine Mass was celebrated as the norm, Low Mass was rushed through in 15 minutes on a week day, and very few parishes ever celebrated high Mass, and at a Missa Cantata the best that most parishes could come up with wsa a very poor rendition of Mass VIII and Credo III. Do you really want to go back to those days. I for one do not and lets be honest those that do probably never experienced the liturgy of the 1940's, 50's 60's and 70's.
My predecessor (who was present at the Conference) did untold danage to my parish by forcing Latin on the parish when they didn't want it. I am not totallyopposed to the use of Latin, as long as it is used sensitively, and not forced on people at the whim of individual celebrants.

My goodness, biretta-making must be a thriving business! It looks like a fantastic event. I hope the fruits of the course will be taken throughout the land (and beyond)

Major differences should never be forced on a parish, which is precisely what happened in the 1970s and 80s. But a return to the EF is not "going backwards", it is part of the much needed reform of the reform. Of course priests should make sure their parishes are with them by providing proper instruction and explanations, which means being gentle but firm. So many of the so-called Vatican 2 changes were irregular and had nothing much to do with the Council, and that includes the near universal use of the vernacular. Here in Sweden we have a reasonably accurate translation from the Latin but the use of the vernacular is still problematic, not least because of the number of priests and parishioners who have come from abroad and are not particularly comfortable with the language. With so many people on the move these days, that is a problem which can only get worse.