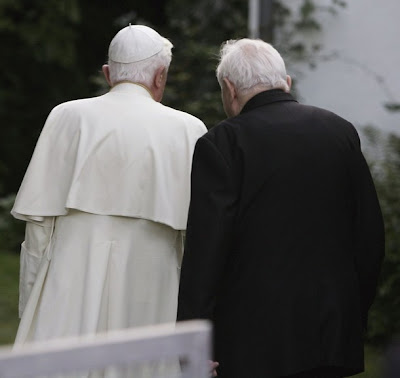 Pope Benedict XVI said he is living his old age with serenity thanks to the example and companionship of his older brother, Msgr. Georg Ratzinger.

"From the beginning of my life, my brother was always not just a companion, but also a trustworthy guide," the 81-year-old pope said Aug. 21 as his 84-year-old brother was proclaimed an honorary citizen of Castel Gandolfo.

"We have arrived at the last stage of our lives, old age," the pope said.

"The days left to live progressively decrease, but in this stage as well, my brother helps me to accept with serenity, humility and courage the weight of each day. I thank him," Pope Benedict said.

At a brief evening ceremony in the courtyard of the papal summer villa in the town south of Rome, Mayor Maurizio Colacchi said Msgr. Ratzinger's presence in Castel Gandolfo "alongside your beloved brother during the summer season fills us with tenderness and, at the same time, pride."

While Msgr. Ratzinger lives in retirement in Regensburg, Germany, where he was the longtime director of the Regensburg boys choir, he spends summers with Pope Benedict both at Castel Gandolfo and in the northern Italian Alps.

The pope and his brother were in the seminary together after World War II and were ordained priests at the same Mass in 1951.

Their father, a policeman, died in 1959; their mother died in 1963. Their sister, Maria, never married and ran the future pope's household in Rome until her death in 1991. The three are buried in Pentling, Germany, where the pope and his brother own a house.

At the summer ceremony honoring his brother, Pope Benedict said, "For me, he has been a point of orientation and of reference with the clarity and determination of his decisions. He always has shown me the path to take, including in difficult situations."
at August 22, 2008

Wonderful! I hope my 2 sons are as close..

Something I have wondered recently is whether the decrase in large families and rise of one or two child families as the norm has contributed to the lack of priests we now have.

One priest I knew said celibacy hit you between the eyes as you lock the church up on your own after Midnight Mass on Christmas morning. Everyone is now obsessed with sex but it is the companionship and support during the other 23.75 hours a day that is really hard to give up.

As a priest you give up all rights to form your own family, which is very hard, as time progresses and your own family unit passes away. For people with large numbers of siblings this must be a little easier for obvious reasons.

Paul of South Midlands hits the nail on the head !

I don't mind living alone, with no family, but most men probably do.
That is why I am delighted to hear of priests visiting each other, when they can.

Let us pray for our priests.

It must be a Godsend to have a brother who is a fellow priest.

Priesthood can't exactly be construed as a "lonely life".The few I know don't seem to get a minute to themselves.

Celibacy will be the least of their problems.

We really should show our appreciation more.

"Priesthood can't exactly be construed as a "lonely life".The few I know don't seem to get a minute to themselves."

Yes because they are forever sorting out everyone elses problems.

But who is there to listen to *their* problems and worries

Papa's love for his brother just makes me love him more.

Paul..you can be lonely in a household with 10 kids & a loving husband! Loneliness is part of the human condition & can only be satisfied by God.

The Priests I know have very balanced lives with priestly & lay friends. They belong to several families & are always welcome..I can't really see where the lonely bit comes..after all if God bestows the vocation he gives the necessary grace.

'A consequence of celibacy is lack of companionship@..I don't quite get that..say if i've been celibate for over 7 years now due to a life-threatening illness does that mean I lacked companionship? Can't see it really!

I've recently been reading The Four Loves by CS Lewis & meditating on the 'friendship' chapter. I think it might be true to say we have lost the art of companionship/friendship in some cases but I don't see that apparent in our priests.