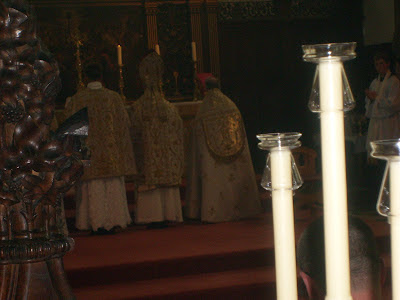 This was perhaps one of the most enjoyable weeks in my 24 years of priesthood.
I am afraid that 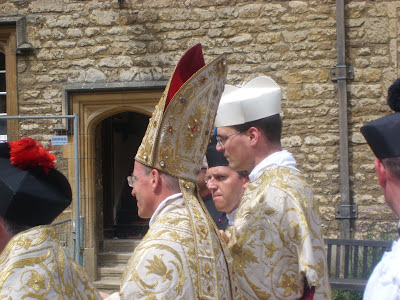 I do not normally enjoy clerical gatherings but this was quite different, I was expecting a few dreadful old reactionaries but actually I found none.
Dr Lawrence Hemming gave a dazzling introductory lecture in which he spoke about the post war period as being a time when society lost its memory. He spoke of Church doing the same, and identified the Liturgy as the expression of the Church's memory. It was interesting to relate this to Cardinal Ivan Dias' remarks on Alzheimer's to the Lambeth Conference.
He spoke of us belonging to the Liturgy not the Liturgy to us. Of us being formed by the Liturgy, not the Liturgy being formed by us.
What impressed me was that the clergy at the conference were there in search of this memory and wanted to be formed by the Liturgy, and to be sanctified by it. In this it was much more of a retreat than anything else.
Dr Hemming, has become another of my heroes, in so far as he gives intellectial substance to what I feel in my guts. Do read some of his books and articles, I am sure they will give you as much pleasure as his all too short lecture gave me.
at August 01, 2008

Father, can I go with you next time they have these kind of conference?
BTW, I'm an alumnus of BJXXIIINS in Weston.

Fr. Would you be able to get a copy of Dr. Hemming's lecture and share it out on the internet? Sounds wonderful!

We are indeed formed by the liturgy. I have been doing some research on the causes of the Enlightenment. This points to - but no more than that - the spread of Neoplatonist/Gnostic ideas, via Rosicrucianism, through the adaptation of the ceremonial of Freemasonry as a means of transmission of the theology and morality.

Ceremonial operates as a level beyond that of cerebral discourse and is far more powerful in consequence.

Conversely, the V2 dismantling of the ceremonial has impaired the transmission of Catholic teaching. Could this have been deliberate? What is to be done about it?

Fr G,
Yes come, there were a few Americans in attendance this year.

Fr Steel,
I think the LMS will publish lectures and sermons, might take a little bit. Could I suggest reading Dr Hemmings "Worship as Revelation - The past present and future of Catholic Liturgy"

Interestingly, your latest hero - together with, I suspect, another of your heroes - is also "not a trained liturgist".

I have some of Dr. Hemming's articles printed out. They are excellent.

That's an excellent soundbite to be promoted: "We are formed by the liturgy. The liturgy is not formed by us."