Pope sends envoy to Our Lady of Siluva 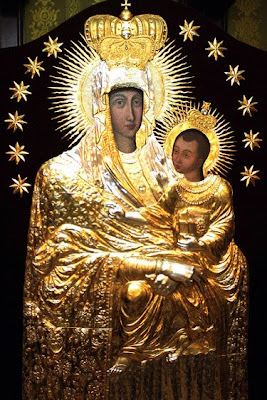 Zenit.org
Benedict XVI named the archbishop of Cologne, Germany, to be his special envoy at the 400th anniversary of the apparitions of the Virgin Mary in Lithuania.

The Holy See announced Thursday the appointment of Cardinal Joachim Meisner for the Sept. 13-14 event in Siluva.

Mary appeared in Siluva in 1608 to non-Catholics. Little shepherds saw what they described as a beautiful woman, dressed in white and blue, with a baby in her arms, enveloped in gentle splendor. The Lady wept bitterly and suddenly disappeared.

Subsequently, the Virgin, again weeping, appeared to a crowd that had formed at the site where the children indicated. The town's Calvinist pastor was among the group.

An icon of the Virgin that had belonged to the village's former Catholic church was found in the place of the apparitions. The icon had remained hidden for almost 100 years.

In the wake of those events, and after several miraculous cures, this apparition brought Lithuania to return to the faith after 80 years of Calvinism.

The event was recognized by a papal decree published by Pius VI on Aug. 17, 1775. Siluva is now Lithuania's most important Marian shrine.

The Pope will be in France during the festivities, marking another anniversary of Marian apparitions: the 150th anniversary of the Virgin's appearances at Lourdes.
at August 23, 2008

Thanks for posting this. A good friend of mine is of Lithuanian extraction. I'd never heard of this apparition before.