Kepi Blanc and the habit 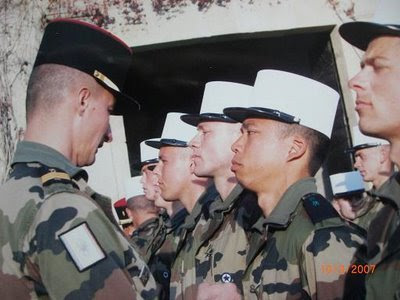 Fr Martin, suggested he had opened a can of worms by his comment below.
I do not think he has done that. I just find reducing a discussion on something which should be serious merely to what people are wearing, or starting it from there, is always going to be superficial. I accept that the habit is often the first thing that attracts, or repels young people, hence among women's orders/congregations those who wear habits tend to attract vocations, those that don't tend not to attract them.
Speaking recently to one major religious superior she said that after twenty years of being habitless, she had come to see it as one of the chief reasons for her congregations loss of identity and absence of vocations.
I have an occasional parishioner here, who is a deserter from the French Foreign Legion, he sums up his first few months of training as being mainly about, "running, sweating, going without sleep to polish boots and pressing uniform, but mainly ironing shirts" apparently with absolute precision. The object of his training was signified by earning the famous kepi blanc. Having got it he left.
Clothes amongst young people especially are a statement of identity. St Anselm said, "The habit does not make the monk" but it does both signify an identity and an aspiration. A young priest I know was asked by a visitor, "Why are you wearing a soutane?" His answer, "Because I am Catholic priest and I am proud of it". One might ask some one who doesn't wear clerical dress why they are don't, I am not sure what the answer would be. For me the black shirt, which in Brighton is worn by practically every waiter, with a strip of fairy liquid bottle at the neck, doesn't make me proud, possibly because I can never find one that fits neck and waist together and stays tucked in. I think it is Italian shirtmakers.
There was a ridiculous Irish bishop some time ago who decided he would not wear his miter or carry a crosier because young people were not coming to Mass, I doubt that this act of mortification changed the situation much.
at August 09, 2008

A deserter from the Foreign Legion!

When my father was in Austria just after the war he knew a man, a Slovene like himself, who had been in the Waffen SS - then he ran off to join the French Foreign Legion.

He deserted because he thought they were wimps compared with the SS!

Was it not Thomas a Kempis (The Imitation of Christ) who said that 'The habit does not make the monk' ?

Fre AG,
Yes both Anselm and Kempis famously did, and I suspect most people speaking to monks and relgious. It is truism after all.

I did my pastoral duties as a seminarian at the retirement home of
SSJ in Framingham and I've seen their elderly sick and dying sisters in their civies.

Thank you Father for your answer concerning the quotation 'The habit does not make the monk'. Very interesting.

'Fr Martin' has now been kicking up a rumpus with, frankly, scurrilous comments about a brother priest and those who attended Merton at Damian Thompson's blog 'Holy Smoke'. It seems his old intemperateness has returned