Prefect of the Apostolic Signature: No Communion for Pro-Abortionists 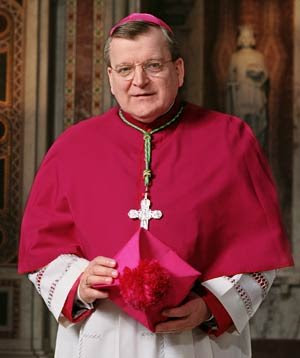 The Prefect of the Apostolic Signature, Archbishop Raymond Burke, said this week that Catholics, especially politicians who publicly defend abortion, should not receive Communion, and that ministers of Communion should be responsibly charitable in denying it to them if they ask for it, “until they have reformed their lives.”

“If a person who has been admonished persists in public mortal sin and attempts to receive Communion, the minister of the Eucharist has the obligation to deny it to him. Why? Above all, for the salvation of that person, preventing him from committing a sacrilege,” he added. (CNA - underlining mine.)

It would be very difficult for an extraordinary minister of Holy Communion to do this. It is hard enough for a priest.

All the more reason not to have extraordinary ministers of Holy Communion then.

Just out of interest, Father William Young, why would it be very difficult for extraordinary ministers of Holy Communion to follow this directive?

Is it equally difficult for priests and if so why?

How have priests resolved these difficulties - and some of them must have done so - and can they offer any useful guidance for their fellow clergy?

When laity do try and do this kind of thing it causes more problems than it solves.

The only reason I can see for it been difficult for a priest is if the priest is a coward who would rather see sacrilege committed and souls go to hell (including very likely his own) than to draw the anger of the wicked upon himself.

As Paul said the solution is to stop the use of extraordinary ministers used in unextraordinary times,that is make people actually obey the letter of the law.

Or maybe Rome could just stop them altogether given that there are no benefits in having them but many problems.

Without being 'polemical', I ask a genuine question: the Church has quite a narrow definition of when capital punishment may be used and, as far as I am aware, Archbishop Burke has not threatened those who implement the death penalty outwith those conditions with similar censure. Can anyone help me to understand this?
Respectfully,
Joe Mc

I guess everyone's moved on from this post. Can you shed any light on this question, Father?
Sincerely,
Joe

Joe, Because abortion is the destruction of innocent life.

Abp. Burke does it again