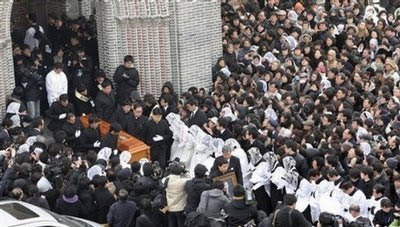 A century after his grandfather died in a Korean prison for the crime of being a Catholic, the prelate who led the church into the mainstream on the peninsula -- Seoul's Cardinal Stephen Kim -- was mourned by weeping thousands at a state funeral earlier today in the South's capital.The first Korean cardinal, Kim -- who led the Seoul church for three decades, watching it grow sixfold in the process -- died Monday at 86. Including the country's current and former presidents, some 400,000 mourners of all faiths were said to have filed past his coffin over its four-day lying in state in the city's Myeongdong Cathedral.Hailed as a "true guiding light" and the last "reliable leader in Korean society" despite the church's minority status -- around 15% of South Korea's 38 million citizens are Catholic -- the outpouring of reaction at the cardinal's death moved one newspaper to lead its coverage with a headline asking "Have We Mourned Like This Before?"
Read more here
at February 20, 2009