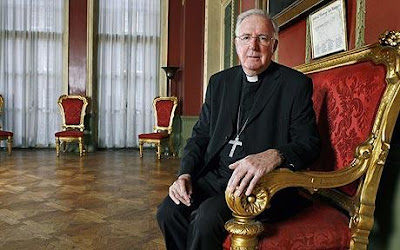 Anti-discrimination legislation is being used to limit freedom of religion “in unacceptable ways”, says the head of the Roman Catholic Church in England and Wales.
In a lecture at Westminster Cathedral on the Church's future, Cardinal Cormac Murphy-O’Connor said the state needed to acquire a better understanding of the contribution and place of faith in British society.
He said: “Legislation on discrimination, much of it good in itself, is now being used to limit freedom of religion in unacceptable ways. The sad and totally needless conflict over the Catholic adoption agencies is one example.
“But that is a symptom of a wider prejudice that sees religious faith as a problem to be contained rather than a social good to be cherished and respected, and which properly and necessarily has a public as well as a private dimension.”
The Cardinal called upon local authorities to give the voluntary sector a “greater and more autonomous” role in the delivery of public services and to see the Church as a “partner in the common good, not an adversary”.
He went on to warn that secularism was based on an “impoverished understanding of what it is to be human” and therefore could never fully satisfy human needs.
“Many of the arguments of secularism seek to offer a new and liberated self-sufficient humanism. Yet, I think, they can only end in the death of the human spirit because they are fundamentally reductionist,” he said.
The Church, meanwhile, “must always be an active agent in the creation and building up of a genuinely humane culture” and not given in to drawing pessimistic conclusions about its future.
read more
at February 26, 2009

Thank you, The Cardinal's actions have not always won the approval of all traditionalists. At least the Westminster Catholic Children's Society has resisted gay adoption. The Cardinal is right to recognize the danger of secularist challenges which seem designed to divide the opinions of the faithful.
Children needing new adoptive parents are amongst the most vulnerable alive. Our Christian duty is to help them. This should come before any consideration of rights of potential adopters.

Many good points made here by the Cardinal. I just wish he would mention more explicitly Jesus Christ and salvation rather that the Church as a social improvement institution. I know that he mentions the gift of the living presence of God, so may be I'm being a little picky.

Coming back to the Faith and prayer I am very happy he mentioned. I hope we will see a greater emphasis on "Fit for mission" as the approach in this area. If we Catolics can sort out the teaching much good will follow for souls in particular and, as a by-product, the society as a whole.

I wonder if he pointed this out to his chum Tony when the former was PM?

It looks as though the Cardinal could become the first Catholic Bishop in the Upper House for 500 years so that can only be a good thing.We shall have to wait and see whether anything he says sinks in.

The facts do not appear to match the words. In this diocese the Cabrini Childrens Society collects in Catholic parishes and conforms without an apparent twinge of conscience, with the Government's Secxual Rgulations, over placing children with same sex partners. They are even collecting in my son's primary school. The Catholic Education Service supports the new statutory condition placed on schools regarding sex education. It seems the Catholic church in this country has increasingly lost its way and accepted the ways of the world in recent years. May I also say the promotion of contraception by CAFOD has the approval of the Cardinal himself because its only information and "information is not formation" according to the Cardinal - I can only try to smile as I attempt to fathom the complicity with the world and not the mind of Christ. Words are very cheap but brave courageous words you may pay a very high price for!

Perhaps not so strange. It was, I suppose, inevitable that "gay rights" would clash with religious freedom.

The Cardinal is thinking along the right lines here, but he could, in my opinion, have used his voice to greater effect in opposition to recent legislation.

Jonathan:
"May I also say the promotion of contraception by CAFOD has the approval of the Cardinal himself because its only information and "information is not formation" according to the Cardinal"
My worry is that the 'information'
may lead to de-formation.