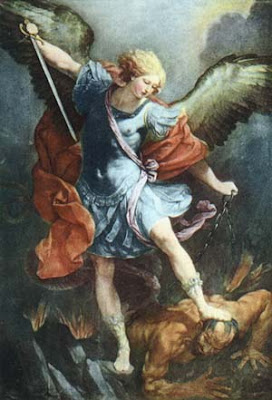 My kind friend Fr John Zuhlsdorf has the comment of a priest on his blog:

From a priest reader:
Everyone is insisting that the SSPX accept Vatican II.
Can we insist that everybody accept Trent?

He also has a fascinating article by Kevin Neylan which cuts to the quick of what is becoming pretty obviously, to me at least, a continuing controversy within the Church, a battle between the left and mainstream Catholicism, between rupture and continuity, between moral relativism and morality certainty.
Ultimately which Neylan doesn't actually mention, it is a battle between whether Revelation can be trusted or not!
Do read the whole article, but here is the conclusion:

As Pope Benedict stated in his brilliant, but widely misunderstood and controversial, Regensburg Address in 2006:

“Theology rightly belongs in the university and within the wide-ranging dialogue of sciences, not merely as a historical discipline… but precisely… as inquiry into the rationality of faith. Only thus do we become capable of that genuine dialogue of cultures and religions so urgently needed today. In the Western world it is widely held that only positivistic reason and the forms of philosophy based on it are universally valid… A reason which is deaf to the divine and which relegates religion into the realm of subcultures is incapable of entering into the dialogue of cultures.”

Therefore, religious dialogue must not be pursued with some naïve belief that all religions are more or less equal in their reasonableness or their potential to stultify. Nothing could be more misguided, not to mention subversive of the fruits of real dialogue. However, our self-imposed divorce between faith and reason, and the blind embrace of pluralism, are two sides of the same coin. Both have the effect of sapping society of the very framework that allows virtue to flourish, that allows modernity’s material goods to be put to their best uses.
Insofar as the Second Vatican Council encourages the Church to engage other faiths in meaningful dialogue and to adapt to a world dominated by modern political institutions, it was right and proper to do so. However, Pope Benedict is equally correct to rein in the post-Conciliar excesses by trying to shore up a traditional moral and philosophical framework: in short, to preserve the marriage between Judaic religion, Greek thought, and European heritage, which allowed the Church and civilization to flourish for nearly two millennia. Few tasks can be considered more important, either for the future of the Roman Catholic Church or the future prosperity of modern civilization.

Fr Z suggests that we should start offering up our acts of mortification for the Pope's intentions, please do so.
at February 18, 2009

As regards the first question I think it's great. It should be set as an essay question for all our Bishops and the results sent to the Vatican. I can just see the confusion and pain on their faces now as they squirm around on their seats trying to answer the question:

"Everyone is insisting that the SSPX accept Vatican II. Can we insist that everybody accept Trent?". Discuss.

As regards the article it's great too. It really does to get to the nub of the problem. I hope the upcoming discussions between the SSPX and the Vatican serve as a platform to restate eternal Catholic truths and we are less bothered this time than in 1968 whether anybody gets upset by it. Faint hearts never taught the Gospel.